Again, @KAI_BORG is my main inspiration for yet another HALO AU. Thanks!

Argent and his wife Rogue are top of the class in kickboxing and short ranged combat.
They were also trained in Mid Ranged Heavy combat, ranging from LMG And Rocket Training to Grenade Lobbing. If mad love had an interpretation, they would be it 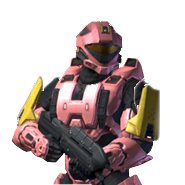 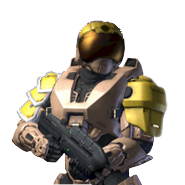 Bottom Picture is Argent, Top is Rogue. (Note, the Halo armour generator doesn’t have a female category so I made her as close to female as possible

The Arc of Bonds

Argent stood at the mouth of a cave. He stood on top of Mountain Unyolong on Planet DET4A

Below him was the not so famous sniper Mark “Arch” Warshank, who’s blue armour shone off the bright green sunlight of the planet.

He was requested by S1 himself to accompany Argent on the planet, as the last mission he had he completed in less than 48 hours and was the best shot he had available at the moment.

Argent was pleased by the inexperienced Arch, who clearly had not been trained entirely in cliff climbing in the regime. He crouched down and aimed his Magnum pistol down range towards the cave opening. Arch was not struggling but was slower than the more highly trained Argent, grabbing the same rocks but with more effort and little care.

“You really think…You were…more experienced?”
Grunted Arch, who was grabbing the last rock and pulling upward.

Regaining his strength, Arch brought his helmet visor forwards, so it could focus on an movement inside the cave mouth.

They were sent on an assault mission after all.
And to what they would have to find out.

They found a couple of boxes and scufffled towards them, using them as cover from whatever might be inside. Inside the cave lied a few platforms and metal containers stacked on top and below them. Radar pings were coming from dishes strewn all across the interlacing platforms. They were fortunately clear, but they lead farther into the cave. They dishes could be easily jammed by one of Archs EMP bursts, but that’s a waste of ammo.

The two Spartans kept a level head, entering the cave at an astonishing pace, Arch with a Battle Rifle and Argent with a QCR Light Machine Gun.
Arch with his tracking knowledge noticed footprints leading downward into the cave.

Argent leaned forwards behind the boxes, looking bad to nod at Arch, and got up from cover. Their walking turned into a short run as they pulsed the inside of the caves. The sense revealed nothing, no heart beat and no audio traces. They were clear for the time being.

Arch looked back as the light drained from the mouth of the cave, and stopped running.
He tossed an EMP Pulse Grenade into the area of the dishes, smiling in his helmet while doing it.

He picked up the pace and turned the helmet pulse to constant, which regularly scanned the known area mapped into the helmet systems.

“Any idea why there’s no heartbeats?” Arch asked, turning on his NightVison visor screen.

Just as Argent was about to end his sentence, his helmet picked up one voice trace. It was 15 meters west, with 10 points of volume.

The Grunt was yelling at something.
Or just losing his mind.

Intrigued, they both shut themselves up and continued in the opposite direction of the voice. They wanted less commotion until they reached the defence point, where the mission’s prime directive was set.

The defence point was deep inside the ice base, surrounded by tons of intel that needed burning. Why blow it up when you could make them blow it up for you?

“We both have enough ammo right? I mean we both are carrying bags of turrets, mines and tracer rounds for a whole army to engulf!” Said Argent to Arch.

“If they die, then it’s enough.” Arch replied.

Guns aside, both were experienced in martial arts and Boxing. They could take you pr head off with a single kick. Plus with their enhanced armour, they could probably kick your head and then the head of the guy standing next to you right off your shoulders.

Their helmets pulsed again, revealing only that one voice track. It couldn’t be just that one guard right, it’s a base it’s supposed to be heavily guarded. Or st least have more than one guard.

They stopped running when they saw a huge sinkhole in the ground, below shone a bright light. The base wasn’t inside the cave, it was below it. The hole turned out to be a hatch a few feet down via a ladder.

Simple yet very medieval, in the two Spartans minds.
They prepared a small charge on the door below them, to which they would drop a flashbang to clear anything t
In the room just in case.
Climbing back up the ladder, Arch dropped the trigger to the bomb down to Argent, who happily pulled it. He also dropped the flashbang, and quickly slid down the ladder and onto the floor, taking off his night vision screen.

It was certainly a testing area, as canisters of subjects and multiple broken vents and piles indicated that it was either old or recently attacked. Finding cover quick, they realized they were not alone. The last helmet pulse revealed more than 12 beating hearts and voice tracks. They peeked out of cover the open fire down the hallway.

“Split up! Take the door on the right, I will go down the left corridor and take them out!” Yelled Argent towards Arch, who followed the command. He shot the two Grunts in the next room, with the following of the sound of bodies dropping to floor…He continued his crouched position, avoiding gunfire from the other Covanent goons facing towards them and moving down the hallways.

Arch tossed a flashbang down range into a large group of Grunts who had funnelled into another room.
The flash was severe, but they couldn’t see it as their visors adjusted to the light. Two more shots from Argent gun sounded in the next hall. The satisfying bumph sound followed afterwards.

Gunfire was whizzing above their heads below the window frames of the lab rooms, leaving holes in the walls behind them,

Arch used his bubble shield initiator and dropped it below them.

“Move up! This is not the fight we are supposed to be in!” He yelled, bringing the shield with him.

It covered them both, as the model Arch had was portable. They found a few hallways ahead of them and continued into the centre of the base, a huge laboratory surrounded by explosive barrels that were once used for testing weaponry. Now it was being used to take their users down and out.

Arch threw his shield into an umbrella shape and walked in front of Argent, who got to work putting up the carbon fiber wall panels. He succeeded and Arch disengaged his shield, as the panels gave them enough time to get defended set up and toss the explosive barrels at the door, stacking them for a unique trap.

“Get the bags down on this table, we get set up right now.” Said Argent, setting down his bag and unzipping it.
It revealed a small portable turret and Fencer mines, which shot out taser wire.

Archs bag contained Fragmentation Claymores and the Tracer rounds which were useful for tracking targets among the gunfire.

Minutes later, the whole lab was crossed with mines and turrets, with the front being covered in red by the explosive barrels. Arch and Argent were aiming their guns at the front door, which already was taking shots from the Covanent death squad outside.

They would break in. And they would defend. Simple as that. Yet not as simple as it seems.

They had two Black Trenches outside that door, the turrets could only take so much damage before need a short repair and reload.

Not an ideal situation for BT’s rocket launchers.
But not a match for mines.

Suddenly, anxiety and adrenaline built up fast inside the two Spartans, who shrugged it off and continued aiming.
Just then, the door busted wide open. Tens of Grunts flooded in and took cover, opened get fire whenever possible. But they were quickly mowed down by Arch and Argents turrets, while the focused on the two BTs standing outside, readying fire.

They were pumping buckets of Tracer rounds into the two walking death machines, waiting for the moment they would fall over lifeless and dead.

The turrets were taking down what felt like hundreds of Grunts at once, but it was only tens as the whole squad was only around 22. The two Trenches finally went down, and then the Fire of the two Spartans focused on the funnelling Covanent Grunts.

Argent grabbed a rocket launcher from the table and fired it at the crowd of Grunts, smothering all of them.
The room floor was filled with green and blue blood.
They had down it, the had cleared the base of hostile enemies.

Argent sensed this and pressed his helmet communication on and let the channel fly. Spartan-01 picked up and confirmed the mission success.

“Yep, it’s all clear down here. Bring around a Pelacan so we can get out of this wannabe ice cave.”

“We’ve got one on route to you, I would join you but I am busy with another mission. S1 out.”