Continuing the release of my reworks of my Doomed Toa MOCs, here is the the next in the lineup!

BIO: Ari was a simple Matoran. His only wish was to be left alone to build and create, a trait he was proud of due to his extreme admiration of the Great Beings. Fortunately, his intelligence always allowed him to craft something from almost anything, much to the pleasure of the villagers he shared his home with. Ari was even clever enough to figure out how to rebuild his right arm after it was severely injured in an explosion, his own accidental doing. Due to his fame from his crafty inventions that made life easier for the Matoran of his village, Ari became known around the continent and islands far beyond as “The Inventor” and even sometimes “the Master Builder.” Ari never grew accustomed to the unwanted attention, and he preferred to stay in his hut laboratory, always building, always inventing. His life was disturbed, however, when an old friend appeared at his door one day… 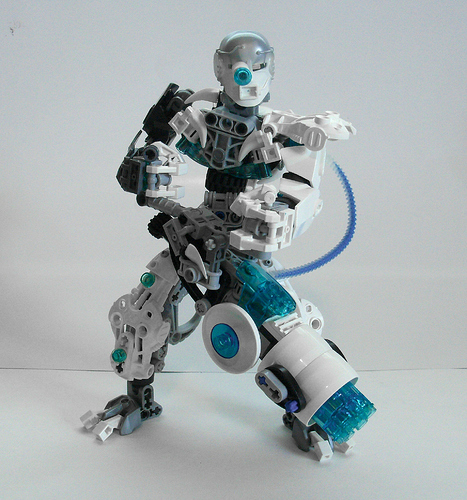 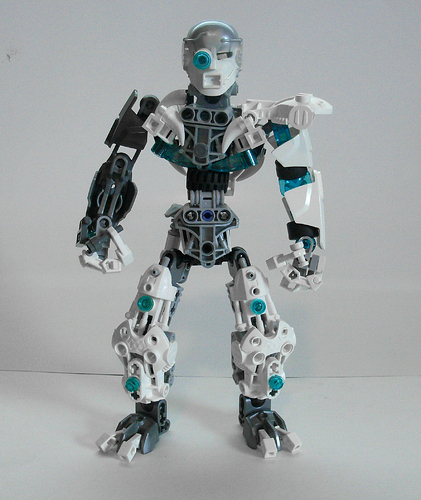 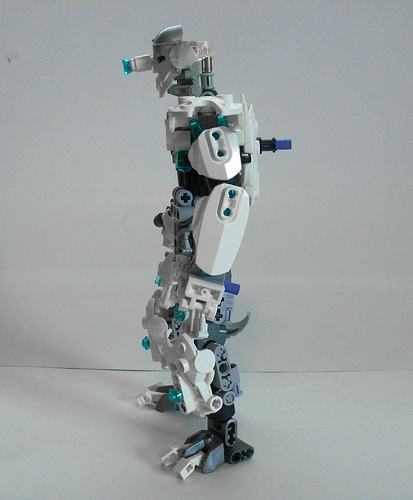 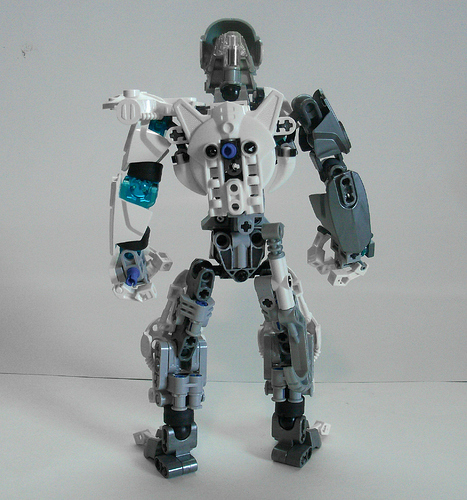 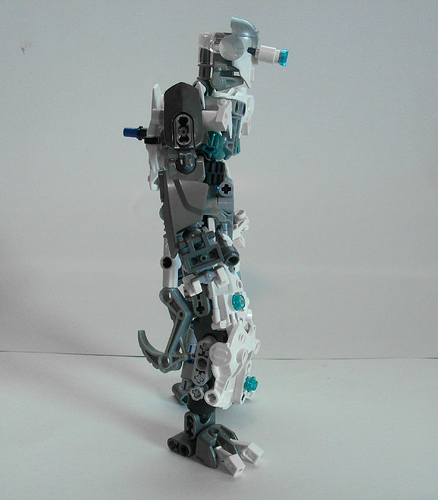 Mechanical arm view (what is it with my characters and replacement limbs?). 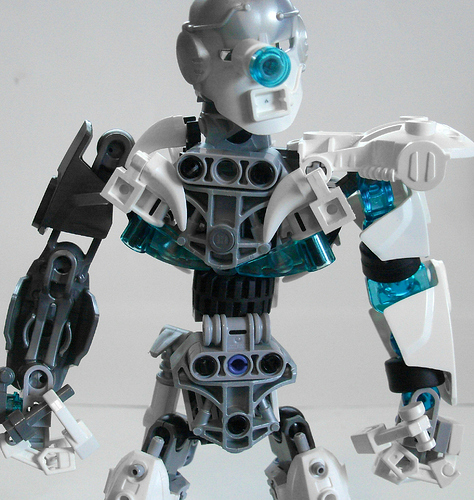 Close up of the torso. It’s not my favorite thing in the world. It’s similar to my Kopaka Mata revamp torso, and it’s fairly triangular and limiting, and it was a nightmare to find something decent to armor the front with. The shoulder pad is also just stuck on there, and while it doesn’t move it doesn’t really hinder what he needs to do with his arms. 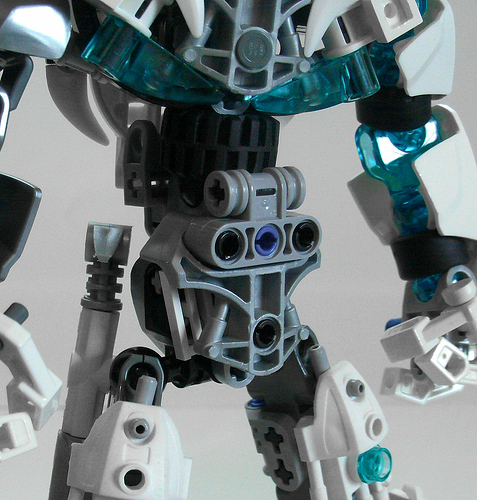 Waist isn’t too fantastic either as the tire is a little too thin, but I personally don’t mind it. He’s supposed to be a fairly small and lanky character anyways. 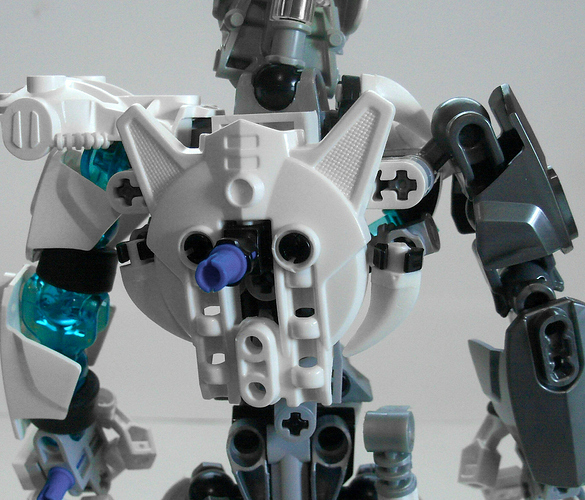 Close up on the back. Same ice shield piece as his older versions. That pin we’ll get to later. 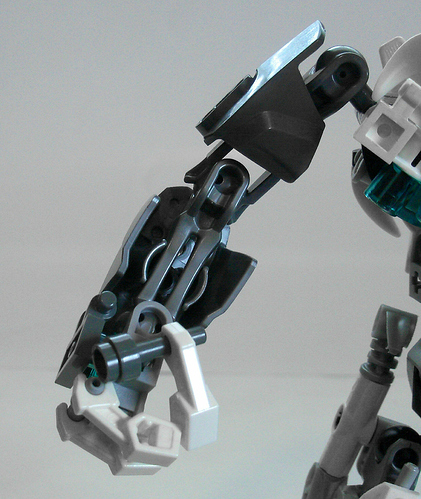 His mechanical arm. I’ve simplified it down to be just a normal CCBS build, but I personally love the simplicity and the way the “bone” bone looks with the armor shell on the back! Really makes it look manufactured. His other arm is a simple CCBS build as well. 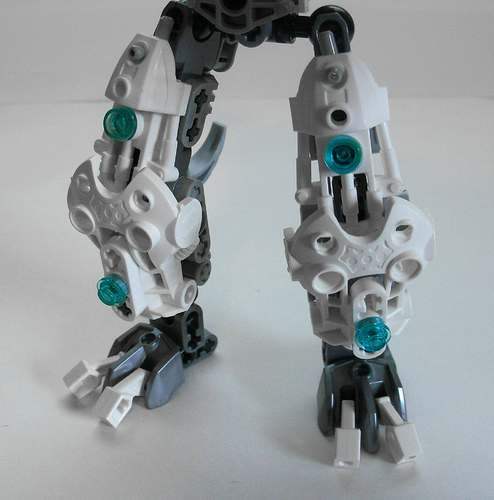 New-ish legs. The thighs are basically the same build as before, it’s just the shins and feet that are new. 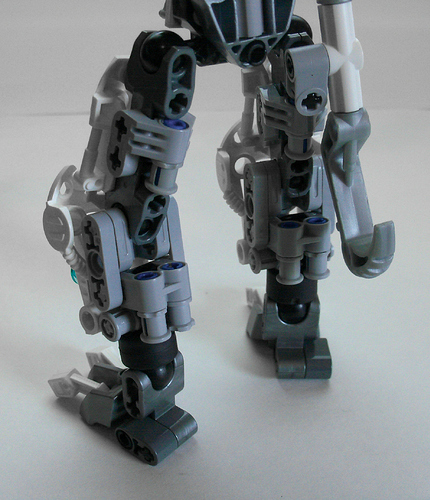 Back doesn’t look half bad either. I had a blast figuring out how to make his shins. His feet I also had some fun with, and I kinda like the toes, as odd as they are. 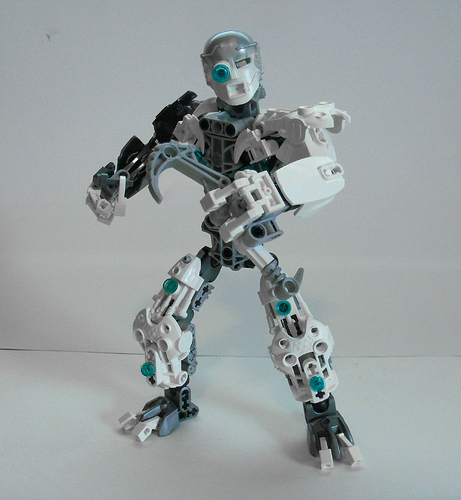 His Ice Sickle weapon I had to get rid of, as it was too large for his new stature. It is now just a hook, which I’ve decided is also a really pointy wrench! 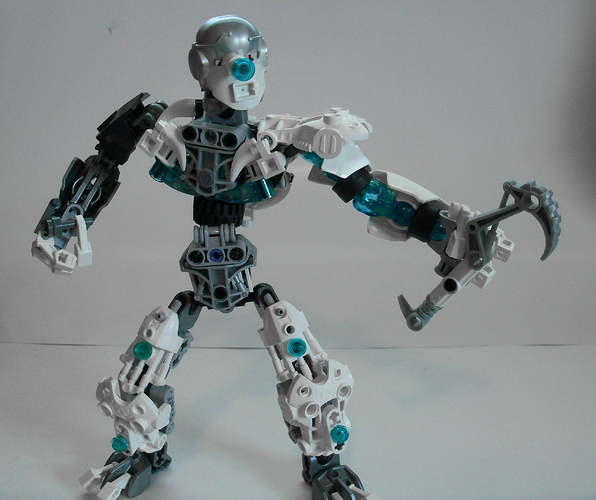 It could also be a normal ice pick or something. 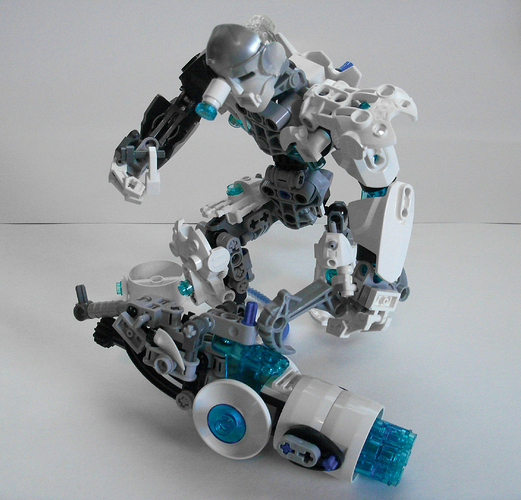 Say, what’s he working on here? 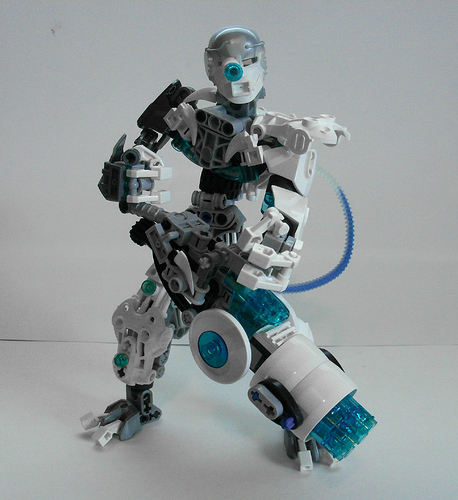 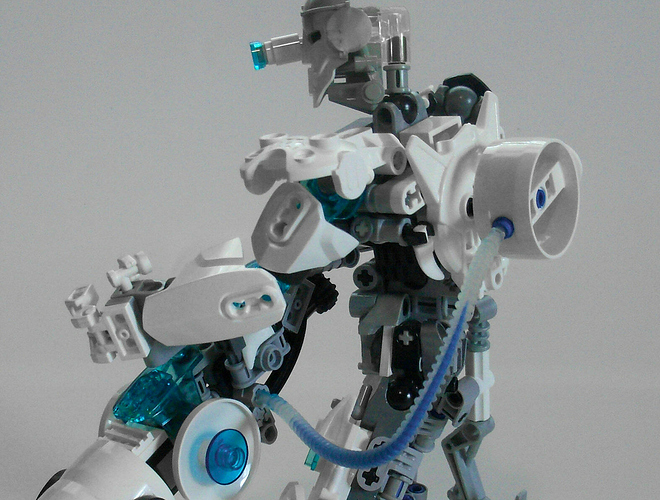 The hose connects via a little cylinder to the pin on his back, making a sort of ammo pack! 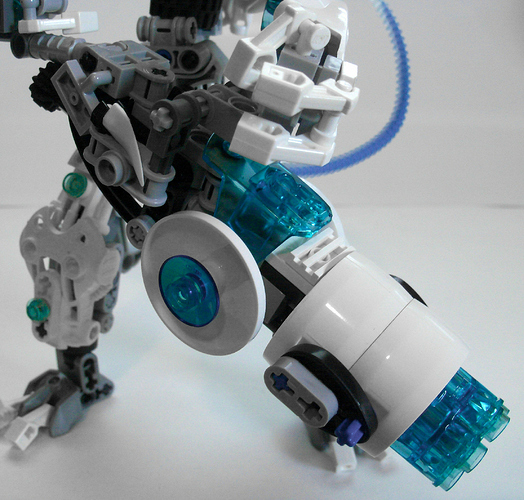 I had made this a while ago for the old Toa Ari, and I loved it so much I decided to make it this Ari’s primary weapon! The sleeker design is really pleasing to me, so much better than the blocky monstrosity that was the original. 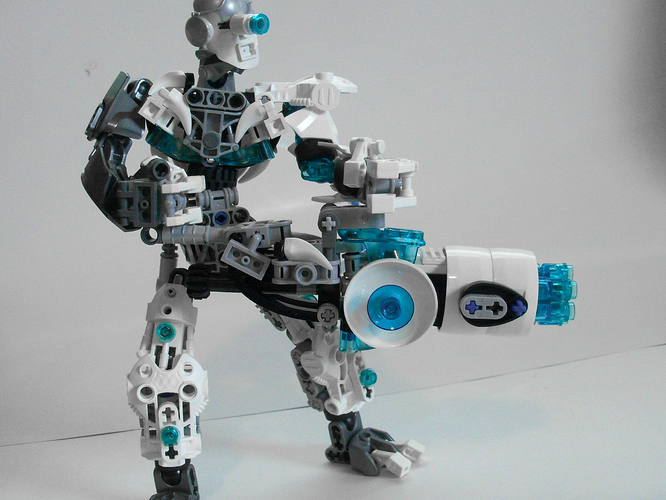 And yes, it really does shoot with the gear at the back! 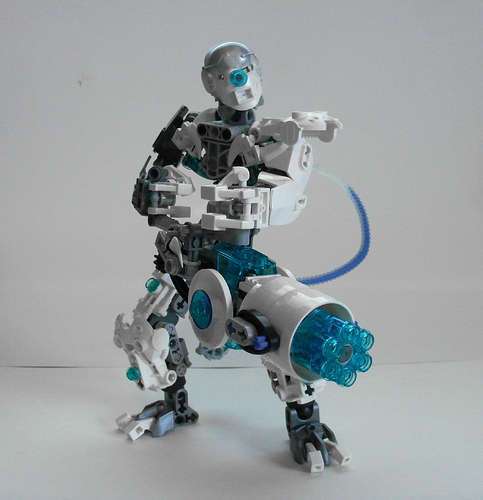 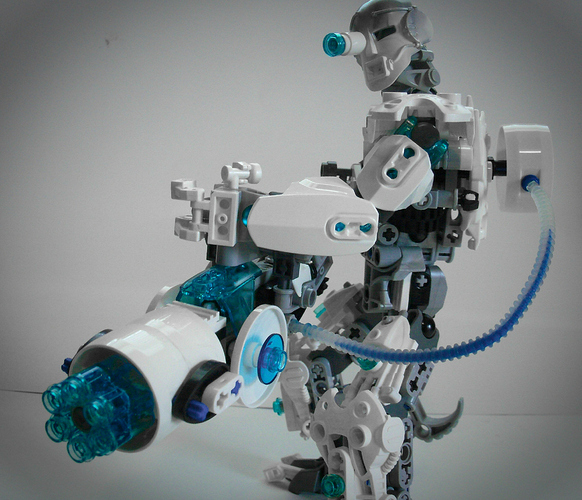 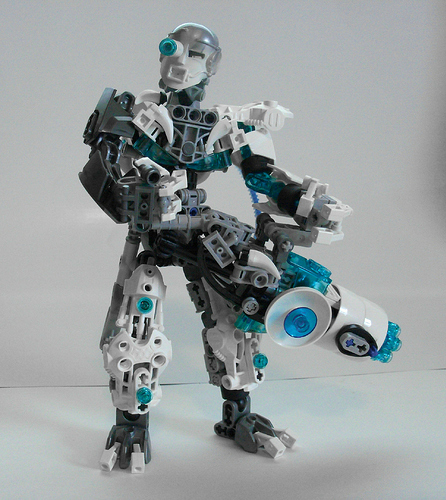 Just…chillin’…(can’t get through one ice elemental post without making an ice pun…). 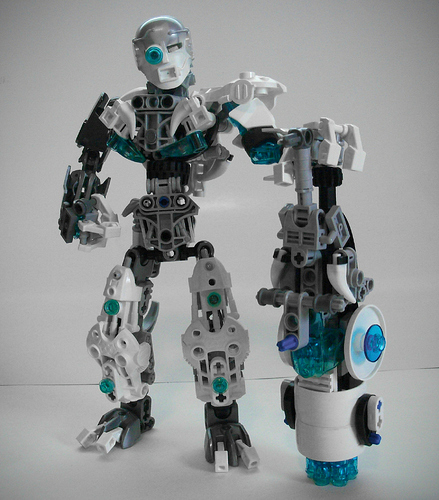 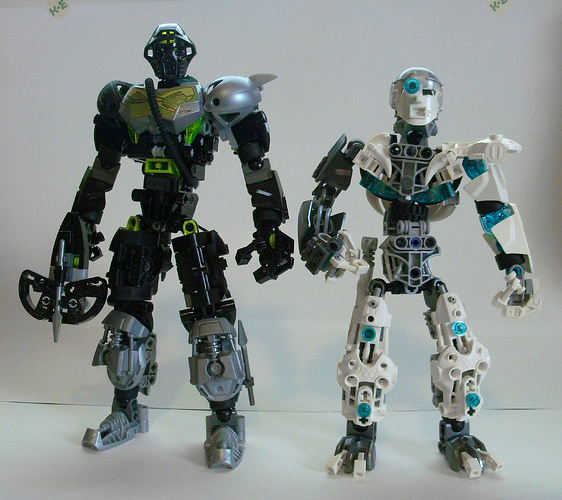 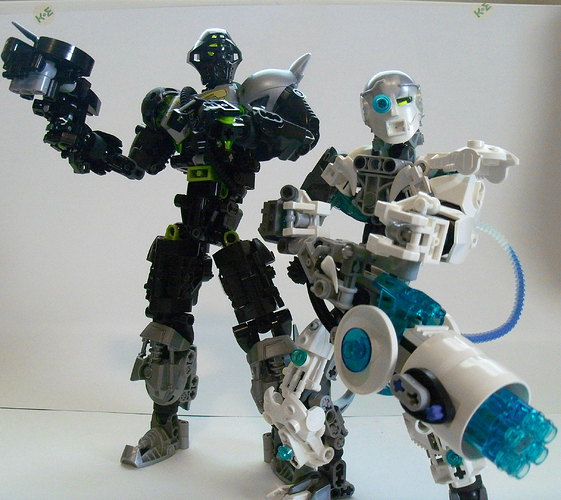 Ready to take on their next challenge!

That’s two! Half way there! I have one more lined up to post and one more yet to build! Hope you all are enjoying these guys!

those legs are sick! though the chest could use more white, but still really good!

Looks good! I would say the legs are a bit short though, and the metru chest in the middle of the…well…chest could stand to be white. I also don’t feel that the roboarm looks robo enough, nor does it stand out from the rest of him.

All in all, good work! glad to see you trying new stuff!

those legs are sick!

All in all, good work! glad to see you trying new stuff!

I would say the legs are a bit short though, and the metru chest in the middle of the…well…chest could stand to be white. I also don’t feel that the roboarm looks robo enough, nor does it stand out from the rest of him.

the chest could use more white

All stuff I can easily fix, although I will have to paint the chest piece! Thanks for the critique, dude!

I’m not a fan for that mask design (the scope), but that mini-gun is excellent-

Very nice. I love the giant death gun that’s half his size and weight.

Why call it a GFIC? That glorious little contraption of his is way better suited to be called a BFG.

Sorry, I had to

the weapon looks great and i love the fine details and overall colour scheme, and i rarely see people use that mask let alone pull it off to such good effect. Solid work man, and a great MOC

Pretty great. The asymmetry is conveyed decently, and I like the design of his torso and weapon. My only gripe would be that the protector feet look a little odd on him.

That annoying moment when you get flagged for saying “that’s pretty good!”

Overall, I like this a lot! I’m just not a huge fan of the eye-piece. Other than that, I really like the gun, it looks very nice.