So, since the Gender Boundaries are dumb, and people ignore them anyway through backstory, I figured I’d join them.

So yeah, Arikas is another result of the experimentation of the Scientist Junkier. She has no knowledge of her past, and grew up a relatively pleasant, if a bit boring life on a remote section of the Southern Continent. People questioned her about her element, and she didn’t know what to say. It never bothered her, though.

She became a Toa later on, and now serves to protect those of Spherus Magna with Fiery Passion and Burning justice!

Name: Arikas
Gender: Female
Species: Matoran(Toa)
Race: Ta(Fire)
Alignment: Neutral Good:
Abilities and Traits: Arikas, as a Toa of Fire, can Create, Control, and Absorb Fire. When using her Toa Powers with 5 other Toa(provided that Light and Shadow are not in the same usage), she can create a Toa Seal. Her disposition is quite sunny, if making her rather eccentric and unpredictable. She believes in justice and the right thing to a strong degree, but she has been known to go overboard with her passions about it.
Mask and Tools: Arikas wears the Kanohi Sanok, the Great Mask of Accuracy but forged in the shape of a Noble Kanohi Ruru. She also carries her Toa Tool, formed from a hatchet she carried as a Matoran. She calls it the Flame Feather Hatchet

http://images.mocpages.com/user_images/95405/1413068192m_SPLASH.jpg
Now, before you say things about the legs…I thought the mismatched look was kinda cool, and it totally wasn’t because I couldn’t find the other red or the other silver ones of that HF armor
http://images.mocpages.com/user_images/95405/14130681921_SPLASH.jpg
Really happy with how everything above the knees came out, though the lower legs are kinda messy.

http://images.mocpages.com/user_images/95405/14130681944_SPLASH.jpg
I really like how the side silhouette of the torso came out, just with the Ackar Armor and the HF Paw.

http://images.mocpages.com/user_images/95405/14130681945_SPLASH.jpg
My Inika Build, which loses pieces almost every time it shows up these days

With Danu, my last attempt at a female MOC

http://images.mocpages.com/user_images/95405/14130681957_SPLASH.jpg
With Knightpriest and Orikad(my Horribad MOC), who are both pretty important to her story.

I will comment, since people have not commented on my Toa Karhi article yet and I don’t want to look like a Hypocrite.

Anyways, I also don’t like the gender boundaries, but I abide by them anyways.

She is a wonderful MOC. She has a feminine shape that is not to skinny and not too bulky, so I applaud you for that. I’m not a fan of the Rau, but you chose it, not me, so there is nothing wrong with that.

I do like the color placement, and the color scheme is excellent.

Overall, she is a well-made MOC.

Hair is always tough to get out in a nice way in mocs it seems, and I like the way you’ve used the rahkshi armor as hair. Looks great Nyran!

I notice you used a Furno-Foot for this moc. Nyran you’re Fired.

I absolutely love this. I might have to use this for a style reference the next time I make a female build.

Minor/major update or whatever.

I fixed the silver leg, and made it exactly like the other one. 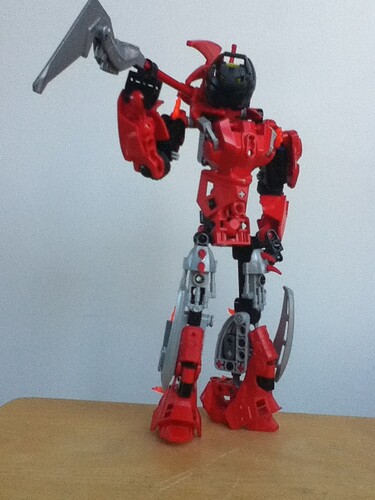 Here’s a look from the side. 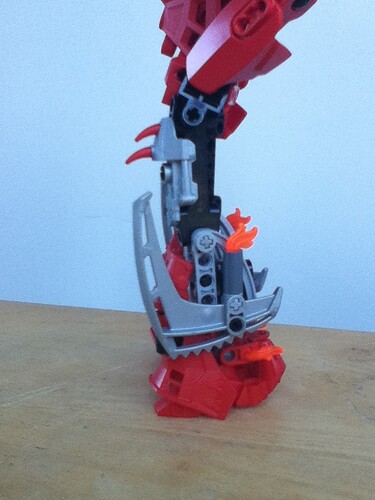 Also I gave her Feather Flame Hatchet another Razar Piece up top. I think it looks better. 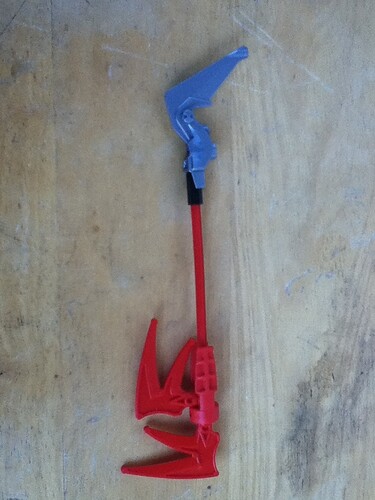 Eh, I think it was better with the one silver leg, but your call.

Nice job Nyran. The color scheme is consistent and looks pretty good.
The only thing I would work on is the build of the lower legs. I have a couple techniques for using HF 1.0 armor on lower legs. I may post them in the howto topic eventually, but right now I’m reorganizing my parts so that might take a while.

I would very much love if you could do that, as I feel the armor itself is quintessential to her overall silhouette.

Here’s a simple yet effective method that I am using on one of my MOCs.

I’m pretty sure you can figure out where to attach the armor from there. You’d have to find a new way to attach the blades on the side of her legs.
Edit: It is not as hideously bent as the skeleton makes it seem. Trust me. 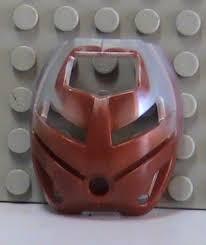 I used to make the same mistake myself. Don’t beat yourself up for it

Sorry. Just hard to remember all the mask names. :S

Great moc. Anyway why not give her a red ruru?

Because I don’t own one.

The Black was the best I had.

Sorry. Just hard to remember all the mask names. :S

Yeah, I really only know the mata’s masks and a few others. I only see knowledgeable because of BS01.

The Black was the best I had.

I actually like it better than if the Ruru was red. It makes for good contrast.

The Miru is the model they used for the Rua.

In canon, they look identical.

(meso voice) Exactly! (end meso voice)
But yeah, it’s a Rua when it’s on the kaita that Lewa’s in. (I’m too lazy to look up the name)