http://puu.sh/tDO7N/a8dd3d3fc2.JPG
An LDD .lxf file, a video and more pictures below

Third of a group of nine Krana-wielding, sentient creatures. Technically a set of two, Yo and its armoured vehicle. Yo is the smallest of the group yet, and will probably be the smallest still once they’re all built. The idea is that Yo’s size is made up for by the vehicle it drives. Also, to prevent the vehicle from becoming too big, I needed its driver to be small.

Just like with Bo, the idea for Yo came on the spur of a moment. I didn’t know what kind of trait would fit the krana best until the idea of a driver came to my mind. Initially I had planned to use metallic green for a different member of the group, but this seemed as good of an opportunity as any to use metallic green.

So, the bigger part of the set is the vehicle. It’s powered by a Spybotics module. This allows the vehicle to be remote controlled. Unfortunately it moves very slowly forward and backward. it also tends to get stuck when driving backward. Because of the way the treadmills are added, it also cannot turn.

I think the slow speed might be a little bit due to unnecessary friction, but mostly because the single Spybotics module needs to power four treads and two flashy ‘boosters’. I think the poor thing from 15 years ago can’t handle that much.

The idea with the ‘boosters’ is for them to replicate a rainbow moving downward or upward depending on whether the vehicle is moving forward or backward.

Also, a trend started with Bo has been continued here. Notice how metallic green corrugated hoses don’t actually come in the different amount of lengths used in this creation. Heresy, some would say.

The .lxf file of Armoured Vehicle & Yo to open in LDD. following the link will start the download. 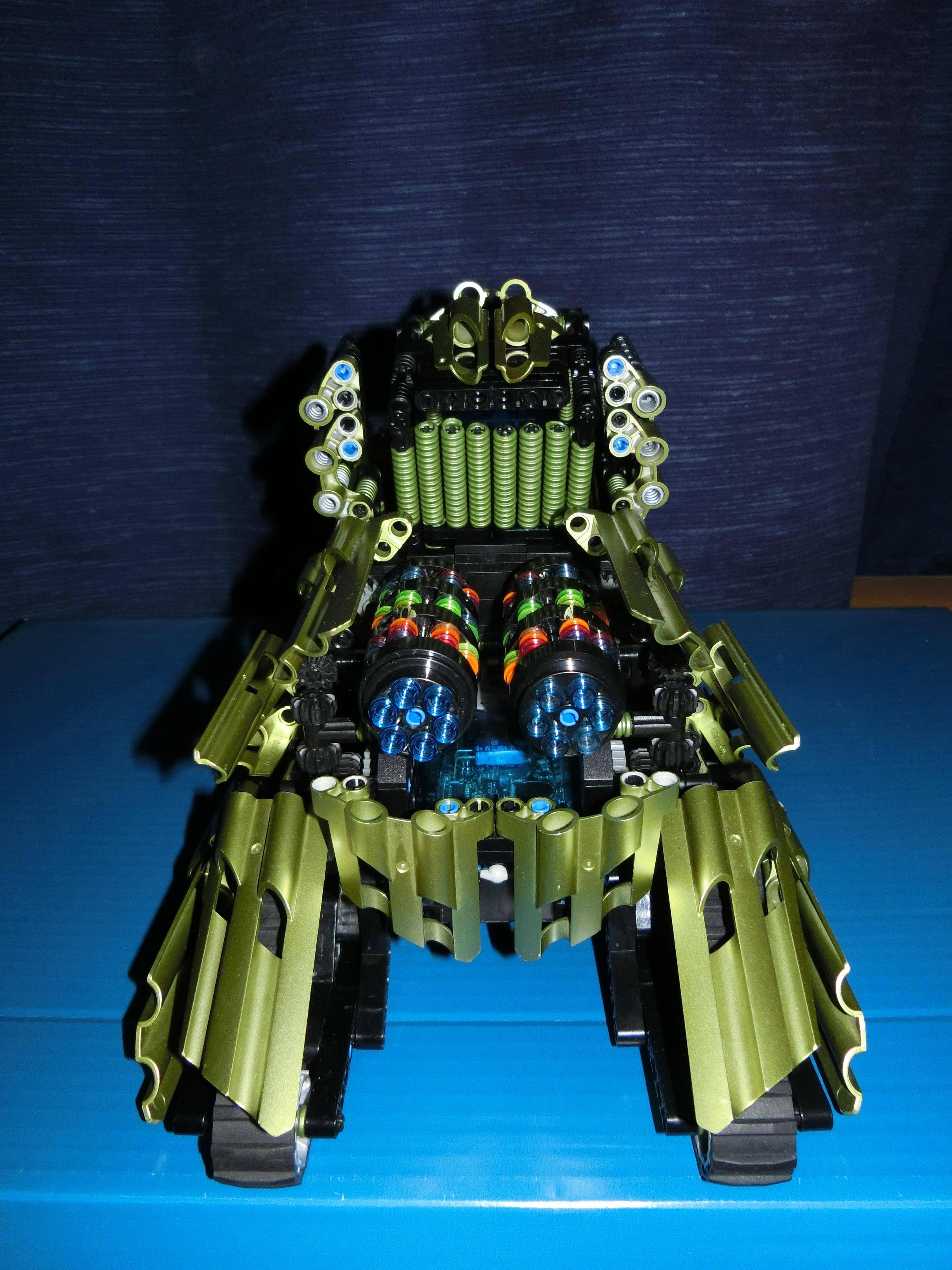 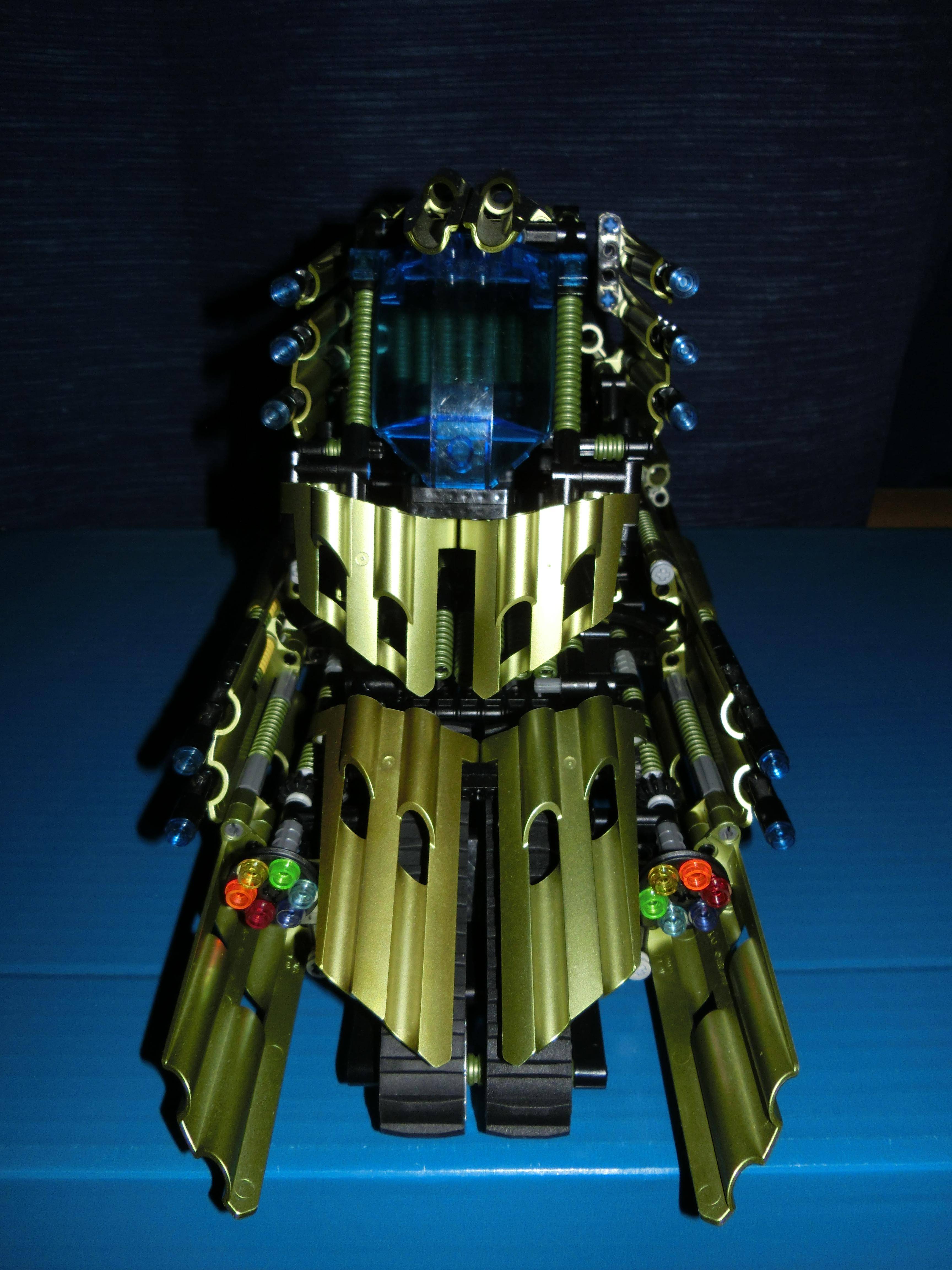 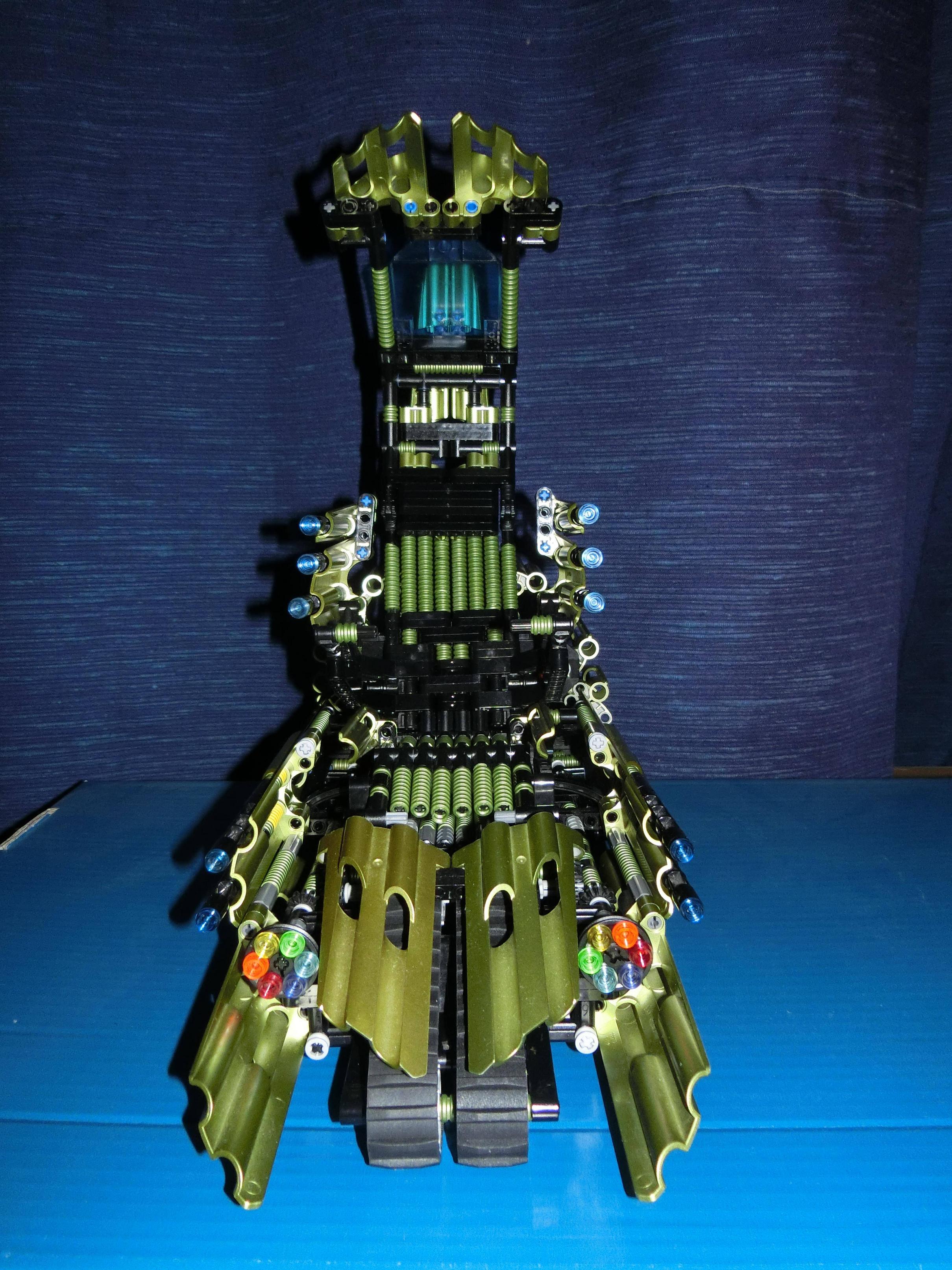 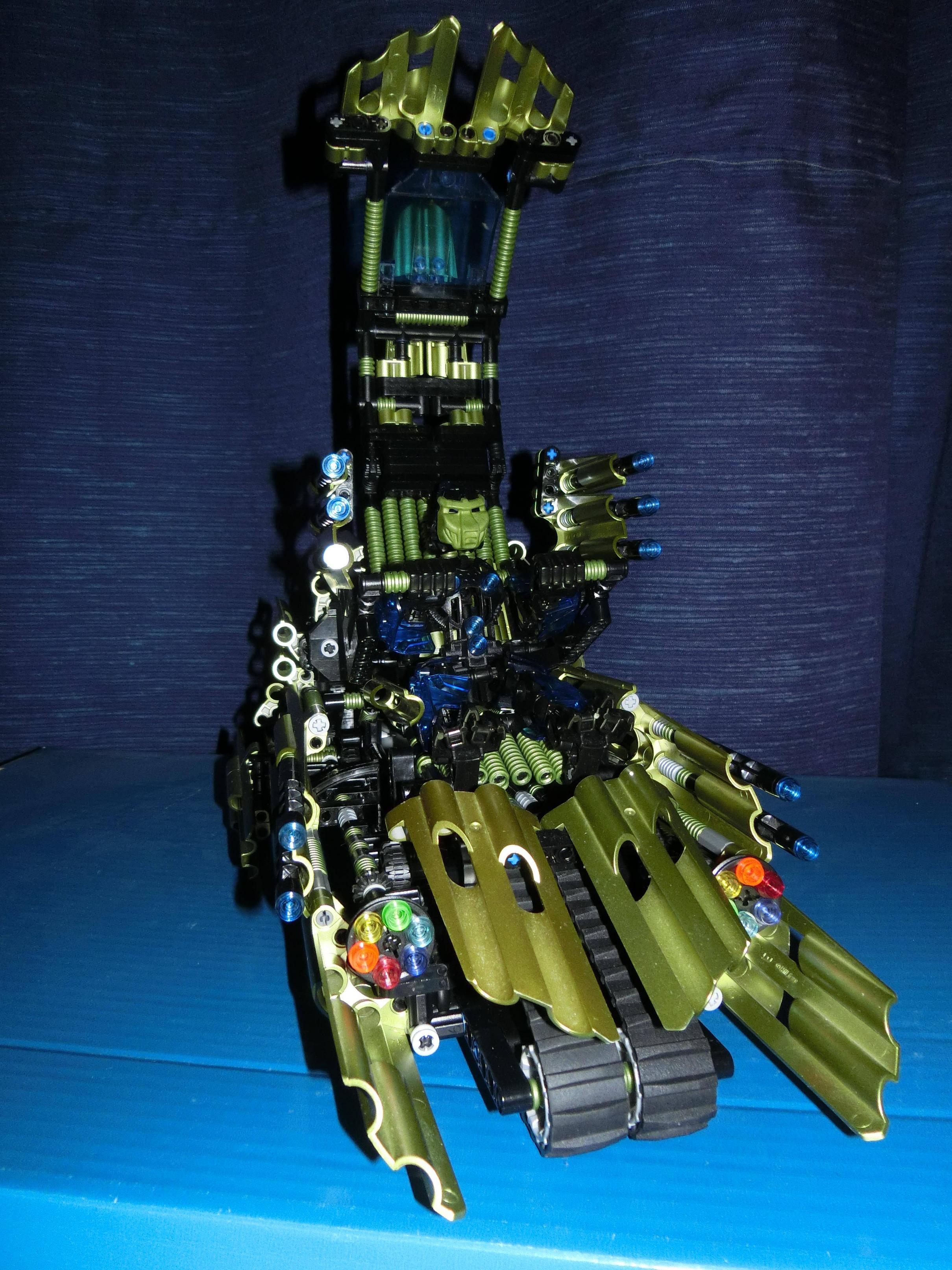 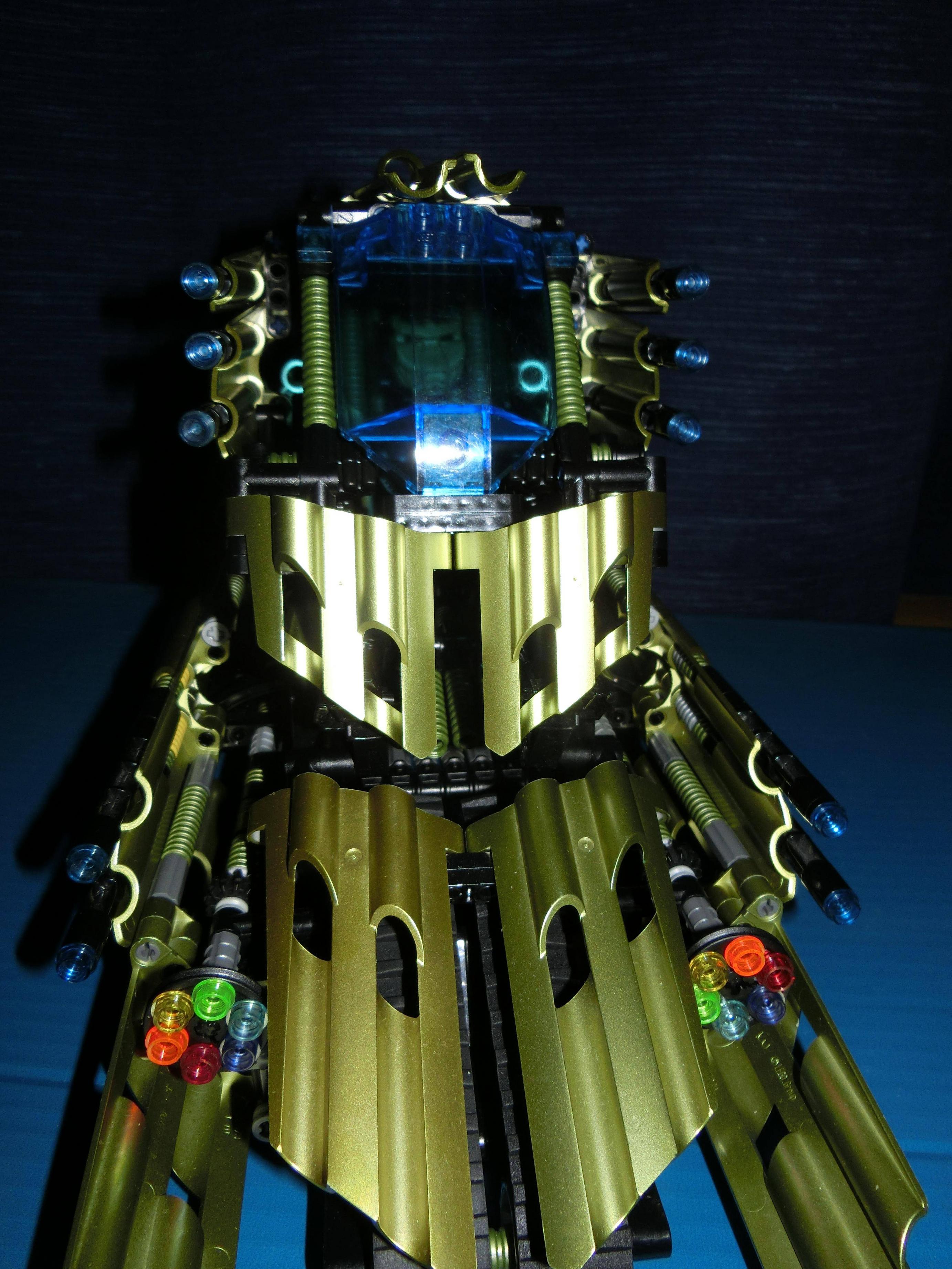 Thanks for reading. Criticism will go appreciated.

It’s like the 2009 Vehicles got cleaned and Brutaka’d, Nice

Thanks, but… what does it mean to Brutaka something?

You certainly have a talent for utilising very abstract colours. This looks fantastic

Wow. This is so many levels of wow.

Are he plates silver, or is that just lighting?

Not many different pieces come in this colour, thus I just had to grab the chance to use it when i discovered krana are one of the few who do.

I dub this…Technic panels, the car

The vehicle is really well done. The shaping and everything comes out great, especially with that metallic green. Also, is Yo your Self-MOC? “Yo” means “I” in Spanish, so I would assume that to be the case. However, it could also just be the name of the MOC.

It’s the name of the vehicle’s driver. I’ve named them after the krana they wear.

Haha, just was referring to the metallic and blue (I can’t see that very well and I really hope it’s blue now) colour scheme, don’t worry, I honestly love it and think that it would give the 08’ vehicles a run for their widgets.

The amount of panels is overwhelming yet I like it, the function of spinning a rainbow barrel cannon just make it very unique.
This only thing I don’t like is the driver, but I guess it’s for less hassle to put it in-

Is it because of the size of the driver or the way it’s built?

Personally I’m not quite sure of the panels on the driver’s back, what do you think of those?

Is it because of the size of the driver or the way it’s built?

Mainly the way the driver design, I can see the bare T-Shape from those hoses between the shoulder.