For quite a while, I have been working on this old, clanky but pretty mean war-machine bloke. 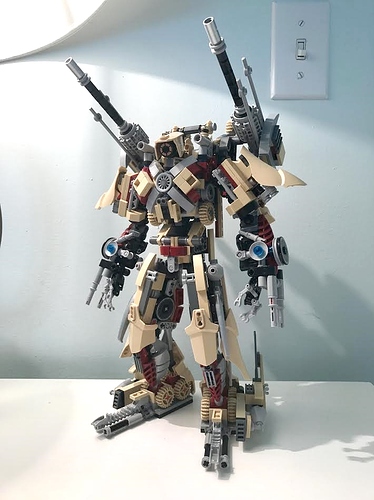 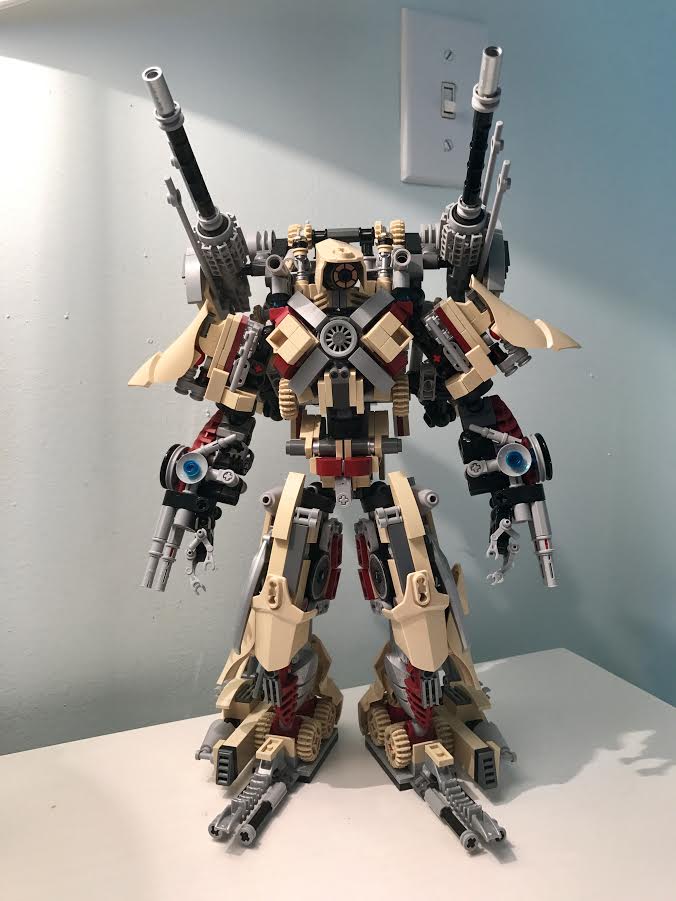 This was heavily inspired by some of the Movieverse Transformer designs (especially with Blackout, Brawl and a bit of Shockwave.) I was attempting to give it that intricate and greebly robotic look that a bunch of them had, while trying not to go too overboard on the textures. There’s a lot of smooth and angular surfaces on top of gears, pipes and vents. The bot is also pretty armed to the lense. 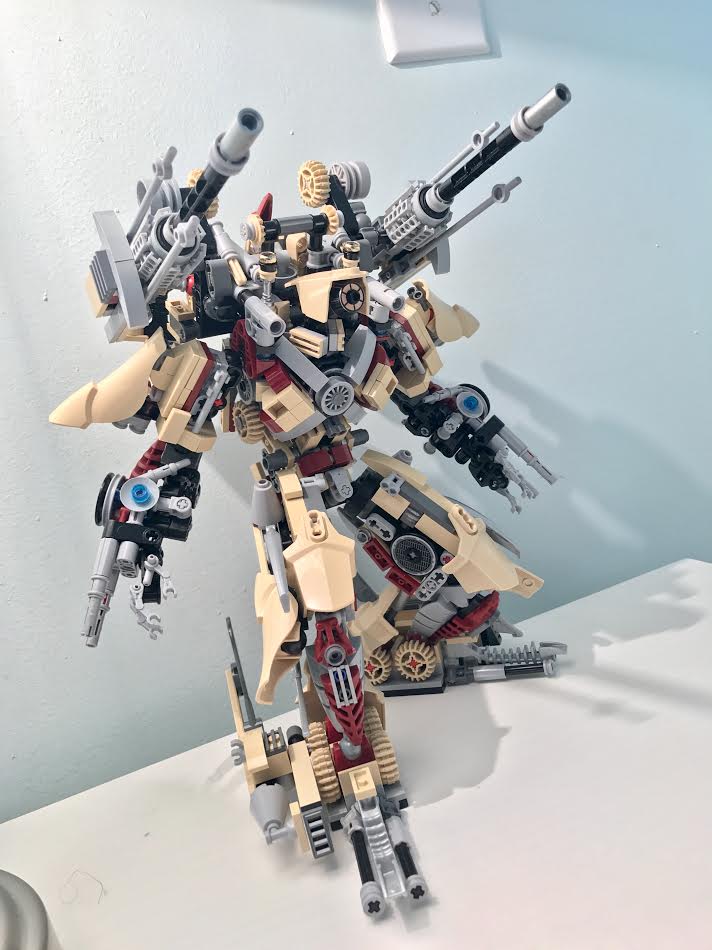 Subtlety is for squares. 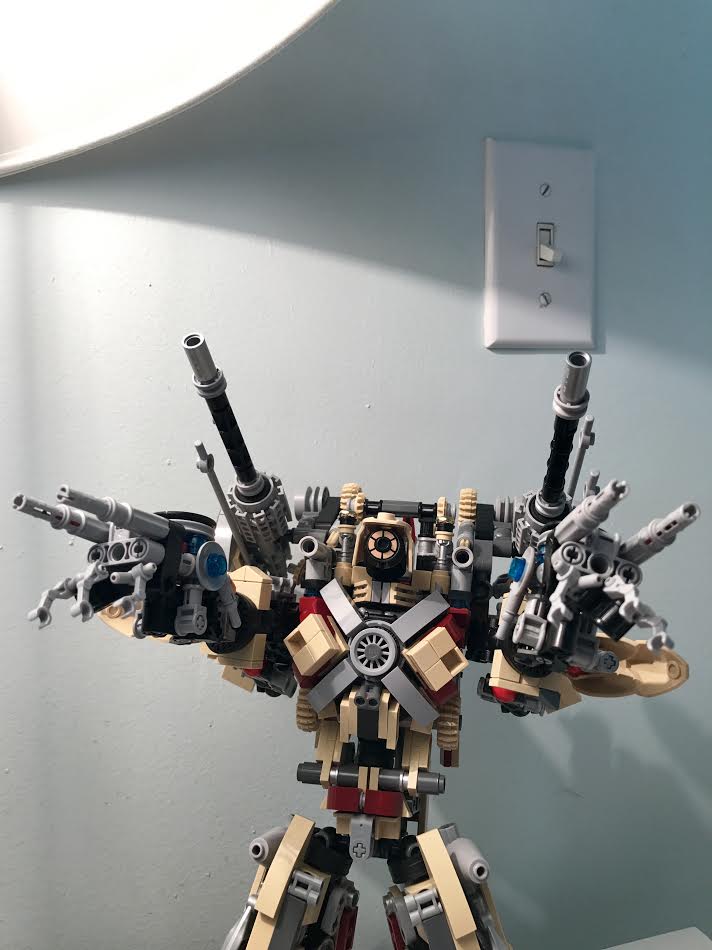 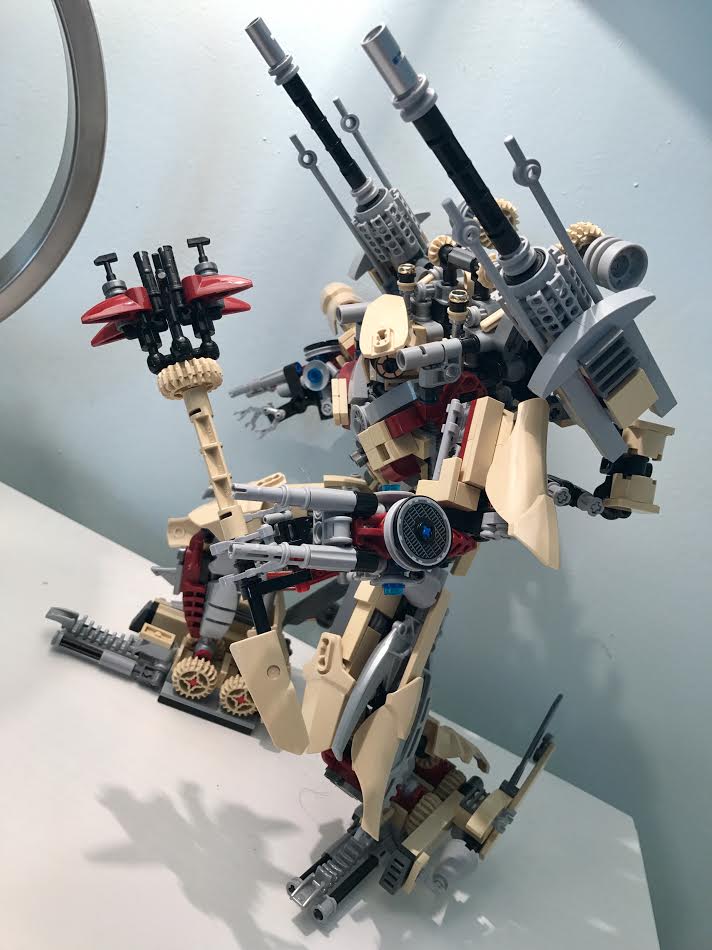 The side and back view still looks rather busy. Might want to make it look cleaner in the future. 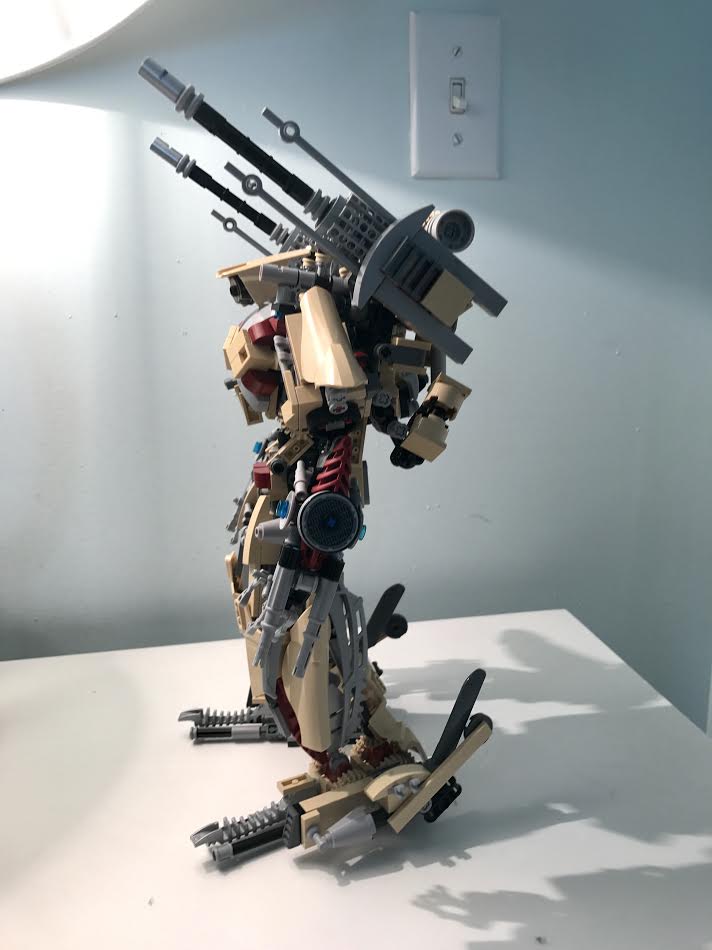 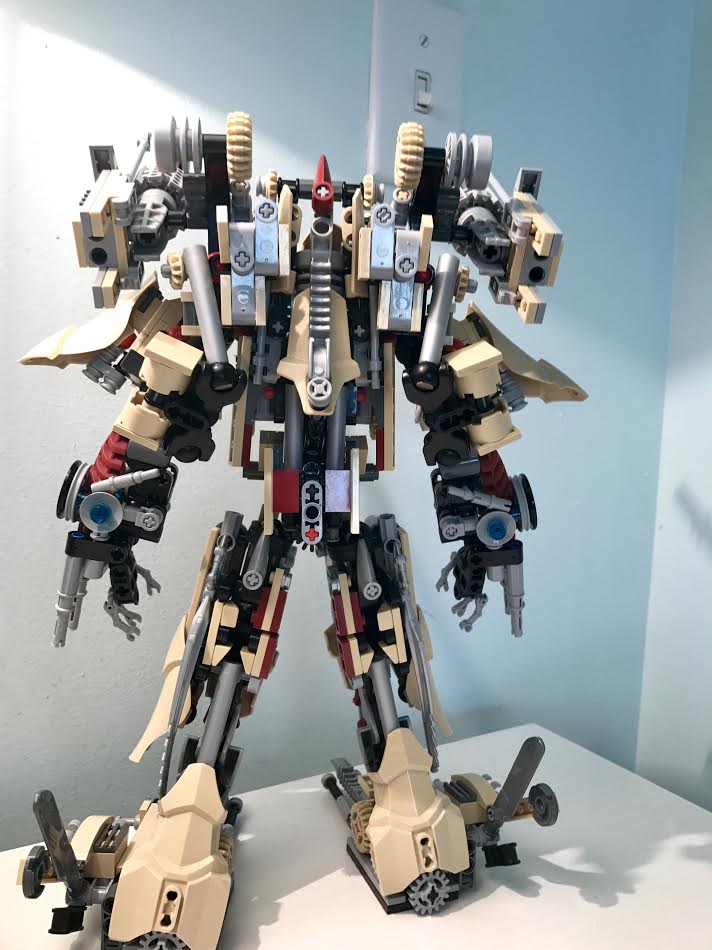 Some size comparisons (Disclaimer: I am not endorsed by Dr. Pepper). 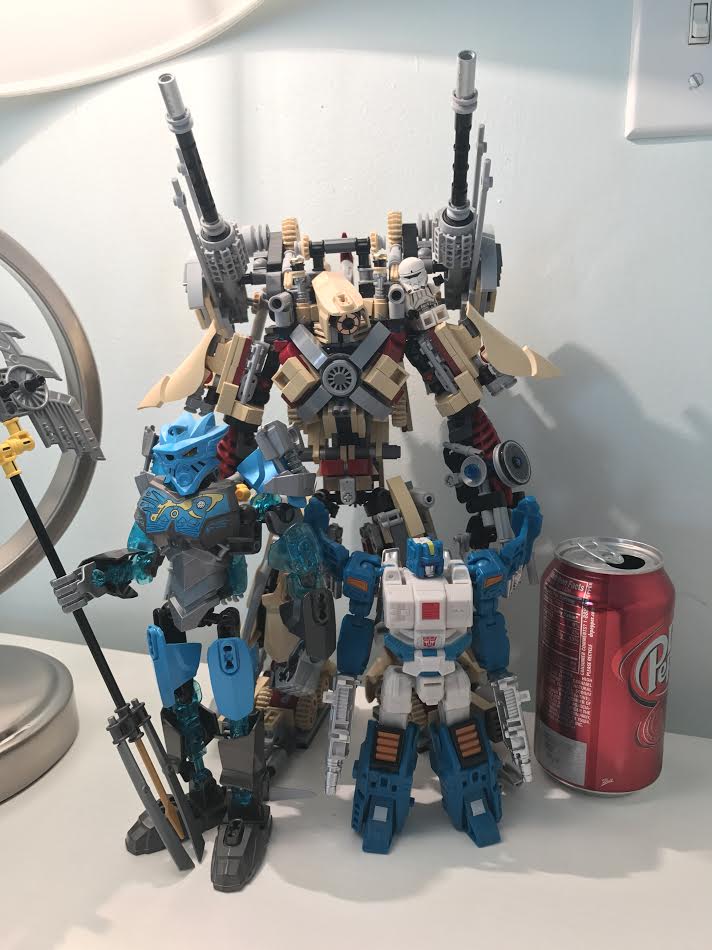 Oh look, a bonus MoC. I made this little drone guy a while back as a little companion for Aftershock. He can also convert into a big blue pin cannon. 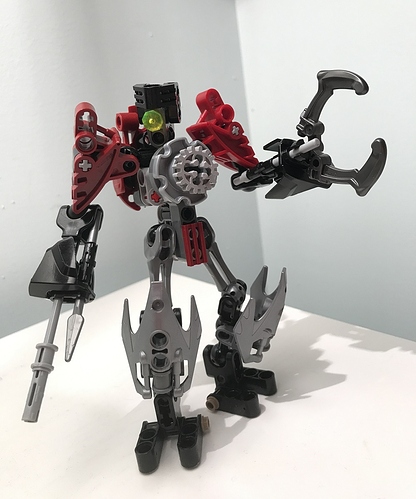 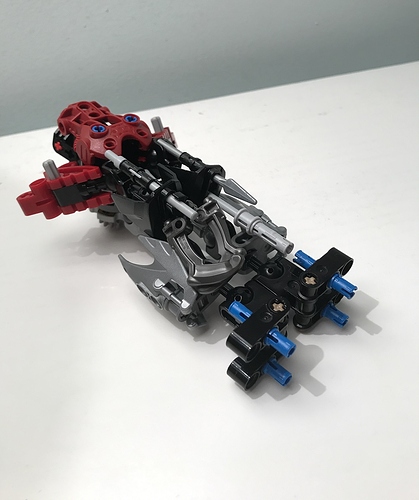 Well that is pretty much it at the moment. Feedback and criticism is always appreciated.

Also scroll down to post 16 to see some updated images.

while trying not to go too overboard

Uh, I think you may have-

intricate and greebly robotic look that a bunch of them had, while trying not to go too overboard.

Oh, no that’s fine. Though the number of guns this thing has integrated makes me wonder if this MOC even understands what that word means. /s

I love the style and colors, it looks brilliant.

Good thing on the internet you just have to type because I can’t seem to find my jaw.

This thing is absolutely stunning.

Mmmmmmmmm yisss i like this, everything about it is great, the shaping, the greebles, the colours, proportions. The only criticism i have is that the hands are kinda off, theyre too small and the hooks at the ends kinda throw off the very polished aesthetic. This is only a suggestion, but you could try this hand design to fix that 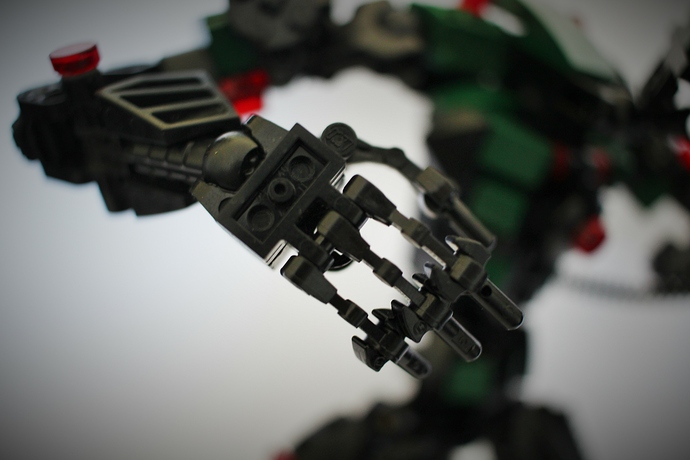 Something about the feet feels a little off, but otherwise this is solid. Ordinarily, such heavy texturing would come off as a bit busy looking, though there’s a definitive layering here that keeps things clean. All the greebly bits are obscured enough by the smoother platings.

Thank you for your advice. I had a feeling that there was something was really off about the hands. I’m not sure if I have enough Exo-Force robot hands left though, so I think I may have to experiment with some other pieces like 1x1 tiles.

Not a bad idea, you could also try using 1x1 tile pieces that have clips attached to them for a similar effect, and certainly a more stable connection

Reminds me off Brawl out of Transformers 2007

This is pretty sick tbh, reminds me of the Tau race in Warhammer 40k! I think the feet stand out as the best part to me. My only issue is his melee weapon. I don’t really think a melee weapon fits his whole being? I don’t really see him flipping and spinning, he seems to be more of a stationary turret kinda guy… It’s a minor thing, but it just stuck out to me as odd

So I’ve gone and made a few updates to the MoC. They are mainly just minor aesthetic and structural changes, like the longer fingers and various changing in paneling. 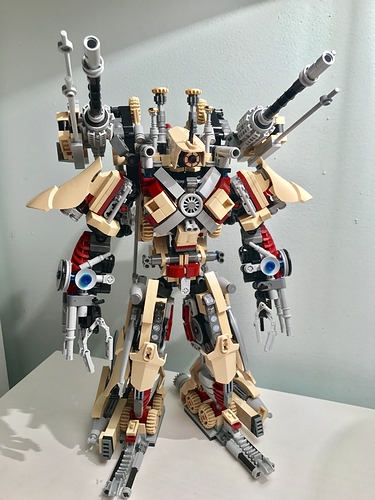 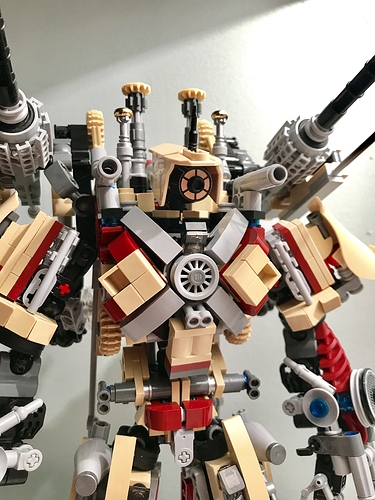 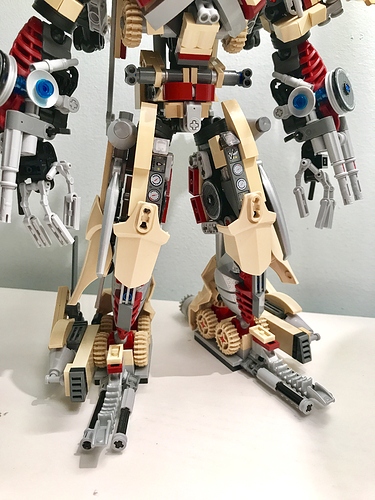 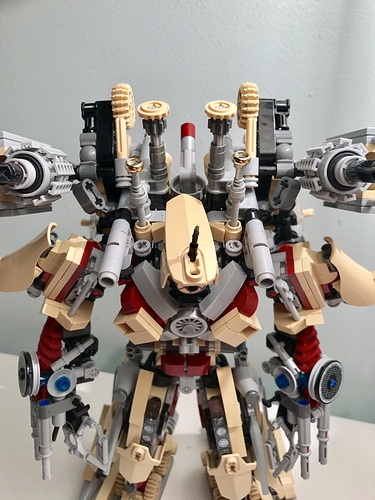 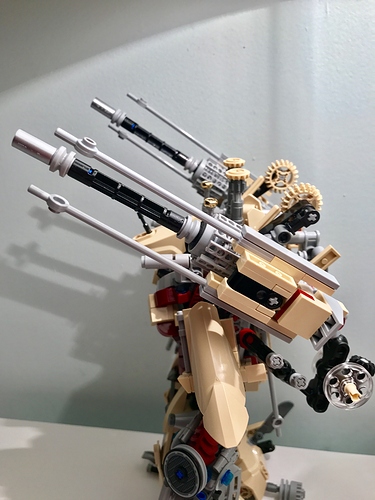 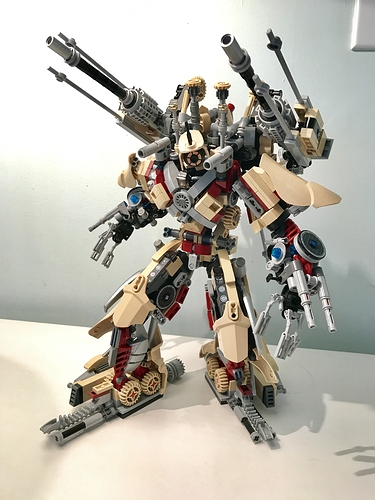 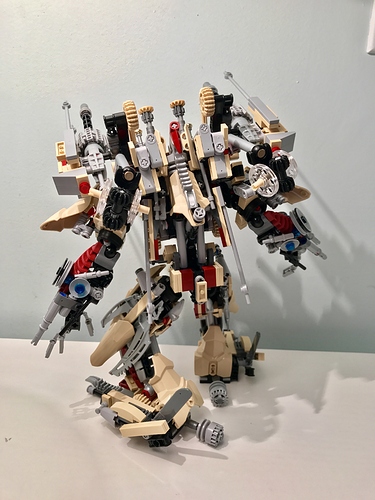 Also here is the skeleton. 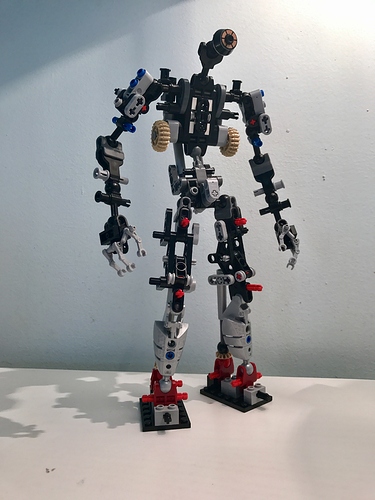 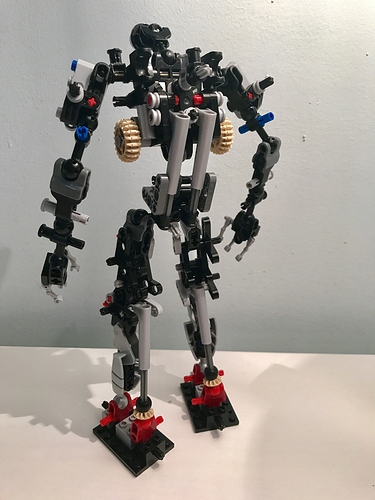 I’ve also added in a tiny Easter egg. He is powered by some ancient emblem with the number 10 engraved on it. 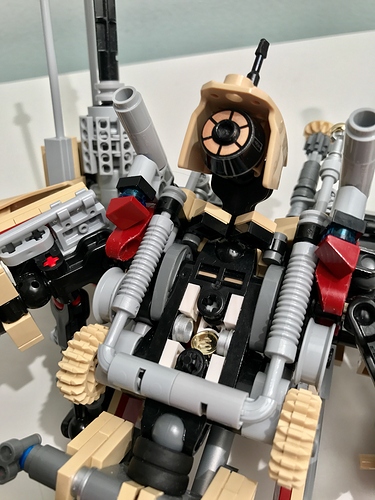 There’s a real sense of scale to this MOC, what with all the greebling and the proportions. Wouldn’t look out of place in Pacific Rim, which is where I imagine it.

So it has been a little over a year and I have made quite a few changes. Its name is now AS-3 Antlion. 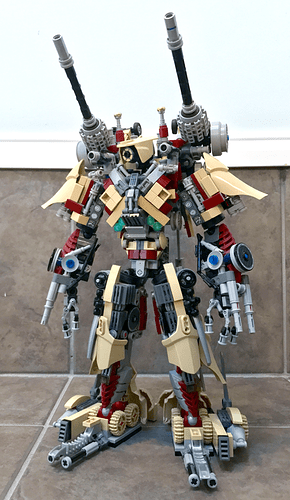 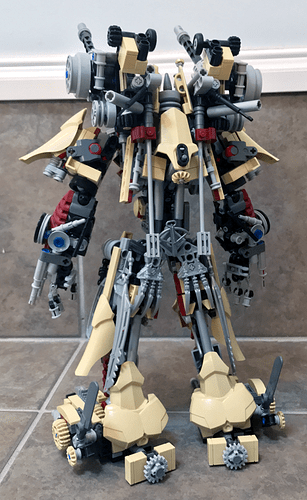 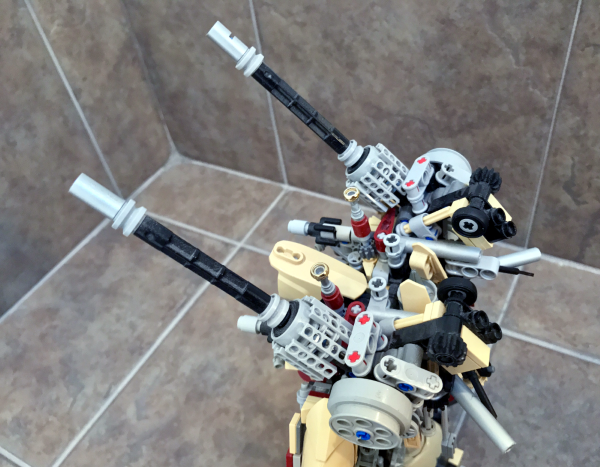 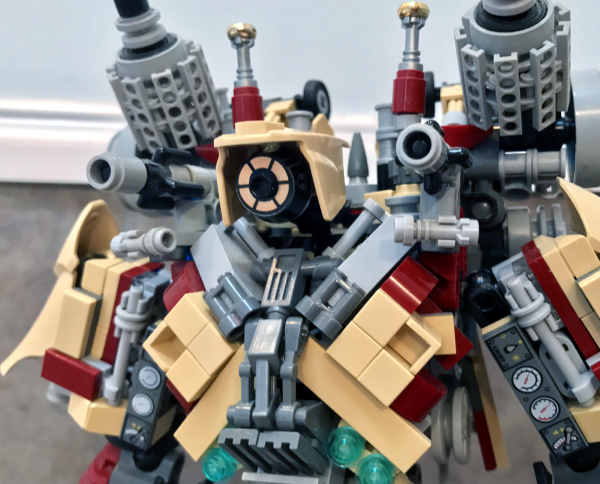 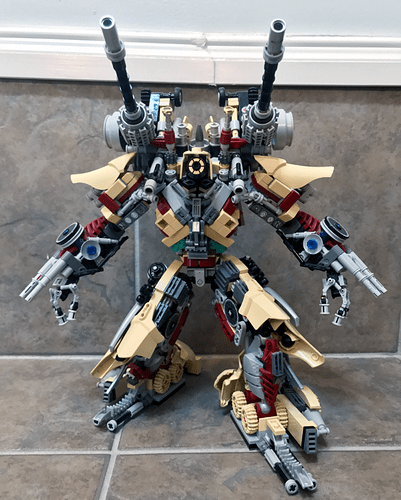 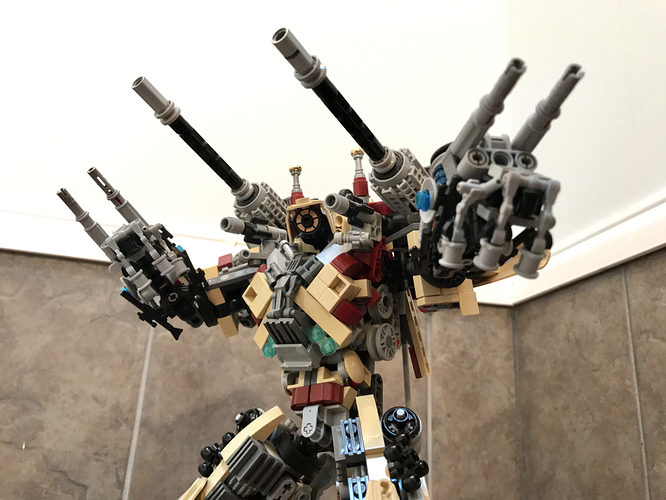 Looks like a Michel bay transformer. In a good way. I love the details and grivals. And that head in neat, reminds me of shockwave