So here is my small entry for the Brickonicle contest, I call it ‘Assault in the Mountains.’ It has 231 pieces and would most likely retail for $19.99 (20 dollars). I had to spell the title wrong putting one s in assault because it picked it up as a swear for some reason, so that was not a mistake. Anyways my model is based off a scene taking place during the Toa Mata’s search for all the Krana. Kopaka encounters a Kohrak and does battle with it. I made the box art in Paint, so try not to kill me on that if it’s too bad (and ignore the red flag, I messed up on that part). 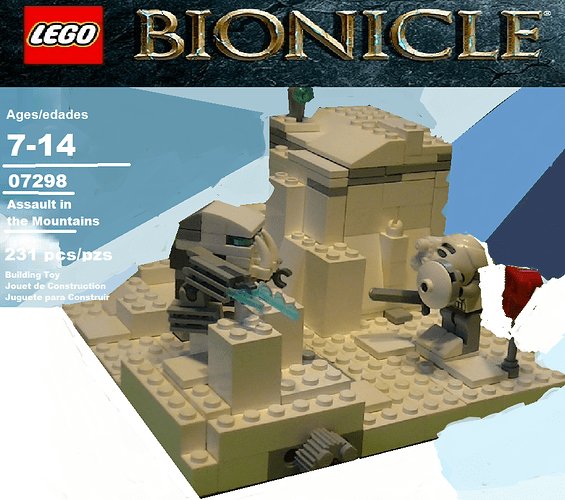 Bionicle custom set assault in the mountains.png908×803 659 KB
The set comes with two minifigs (Kopaka and Kohrak) and a blue 1x1 flat piece for a Krana. It can be seen along with additional shots of the minifigs and set here (I 100% suggest everyone checks those out. I made it a different page for space saving). 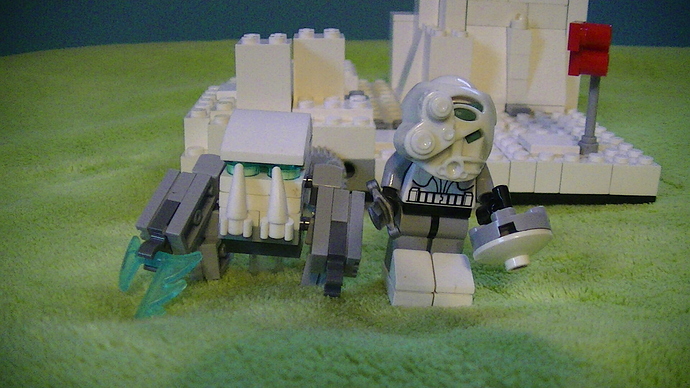 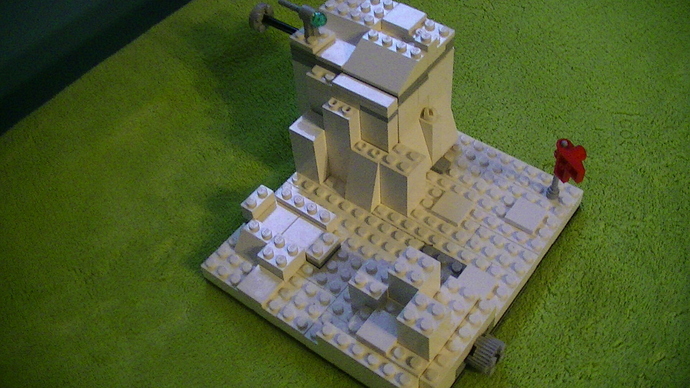 PIC_0394.JPG1920×1080 560 KB
You can see all the features of the set in action in this video (please watch, the pictures only show the aftermath of the functions):
https://www.youtube.com/watch?v=4ZBdb6JB4gk
So the first feature is Kohrak digging out of the mountain, looking for trouble. All you have to do is have him plugged into the holder inside and push the button on the back. The side of the mountain piece that comes out cannot go farther than it can be seen inside the mountain. I put stud pieces on the inside to prevent that. 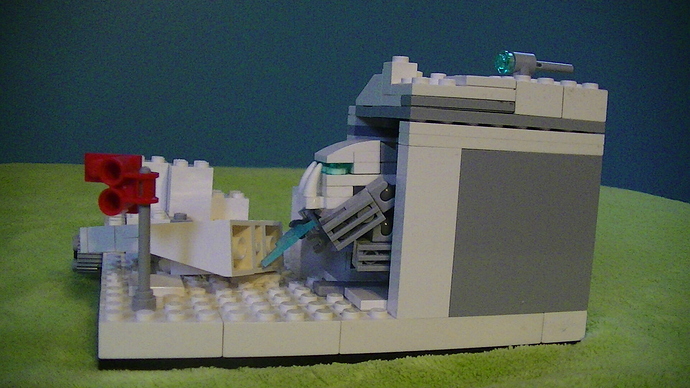 PIC_0398.JPG1920×1080 496 KB
The second one is to emulate Kohrak shooting power (or ice or whatever he shoots) at Kopaka (or some other fig if you use one). It’s just a flick missile that you can aim at all parts of the set. The technic piece plugged in the brick I believe is legal, especially since Lego used it in the Skull Motorbike set. 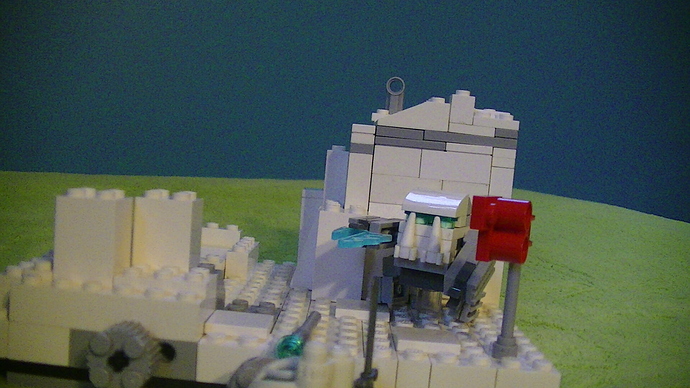 PIC_0400.JPG1920×1080 507 KB
The next one is very simple. It’s sort of makes up for the figs not having gear functions to battle with. You just plug Kopaka (or any other fig you use) onto the end of the piece, and move it up and down with the back of it. 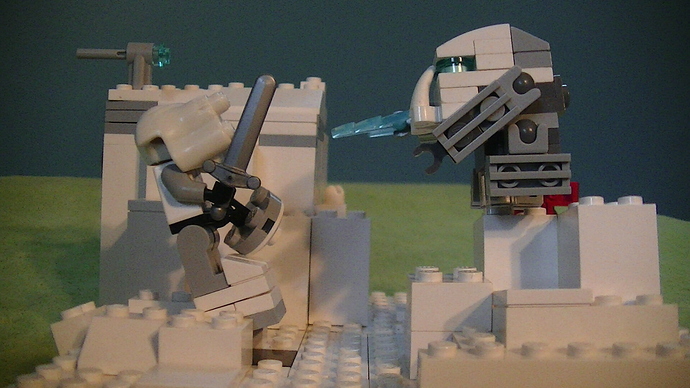 PIC_0402.JPG1920×1080 457 KB
The final feature (and my favorite one) is the drift launching feature. Kohrak can be on or next to the drift in this one. Kopaka can use his power over cold substances and launch the drift. Just twist a knob on the side of the set and it comes out. Bye bye, Kohrak. 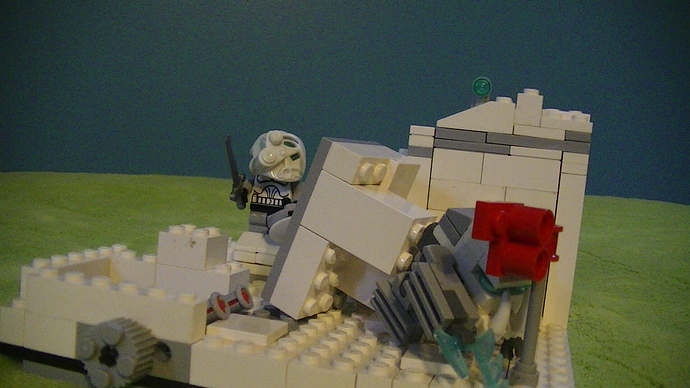 That is it for my entry, as I said before please very much check out the additional pictures here and since theres nothing else to say, thanks for checking out my MOC.

This set is very blocky like a Minecraft set-
The play function mostly focus on breaking things (not too bad) and I wish it was more spread out and a additional figure for the price.

It’s Eljay’s rule of 100 pieces = 10$ for its price. It was originally much smaller so the size it is, is all I could do right now. But what would you suggest the extra fig be? I was thinking about adding a Matoran but I only had one miniature mask (which I used on Kopaka) so it wouldn’t work.

I think that the set is too blocky and not that well built. I think that the things that could have been done better are the structure and overall shaping. probably the thing that bothers me the most is the flick missile, now ofc this could just be lack of parts but it feels outdated and out of place. Also for the price it has I think you don´t really get the value of the set (IK it´s based around the contest rule but still, parts usage could have been done better), another figure might have helped.

Didn’t know we can do that. I’ll fix that then.

It’s a great set for what it is!
Personally, the blockyness of the terrain doesn’t bug me that much, as I find building terrain kind of a challenge in any way.
The mini figures are cool, ang the custom acaku is really neat!
My favorite part, though has got to be the functions! They are nicely integrated, and the amount of them for a set so small is quite impressive!
You did a fine job, and I wish you luck on the contest!

The build itself reminds me of older Lego sets, and that’s fine to me! But I suppose the structure could use a little more shaping.
Now, the functions look pretty good, and appropriate. I would definitely love playing with it!
As for the figs, I love Kopaka. I’d rebuild the Bohrok though, looks a little too much like a yeti-type thing. A clear piece on top would help, I think.

It’s not a custom Akaku. It’s from the Bionicle pens. You can see it in Eljay’s review on them

Huh,
It looked a bit small to me for the pens…

There is a bohrok, therefore I like it. Also, where did you get that tiny akaku?

I just said, the pens. Eljay did a review on them too so you can go see that.