Attempting to design the theoretical 2010 sets.

Been going on a BIONICLE nostalgia trip lately and once again I find myself thinking about what could have probably been had the line not grinded to a halt in 2010.

As some of you know, a 5th and 6th movie were planned as part of a trilogy that began with The Legend Reborn in 2009. For obvious reasons this never happened, however a rough draft of the plot of the 5th movie was posted by Greg in 2009 on BZP and here as well (Anywhere else to read treatment for 5th bionicle film?)

The film would have seen Mata Nui and friends traveling to the northern half of Bara Magna to the Valley of the Maze. Along the way they fight the Element Lords, shapeshifting robots, they find a guy buried under rocks, a defected Skrall tags along, and it ends with Mata Nui, Ackar, and Kiina landing on Bota Magna- and there are dinosaurs there. Pretty fun stuff.

So today, after being bothered by not being able to know what the characters would have looked like for the umpteenth time, I took matters into my OWN hands and decided to start a thread where I sketch ideas for theoretical 2010 sets that could have been, basing it off of what we know as to how they could have looked like. 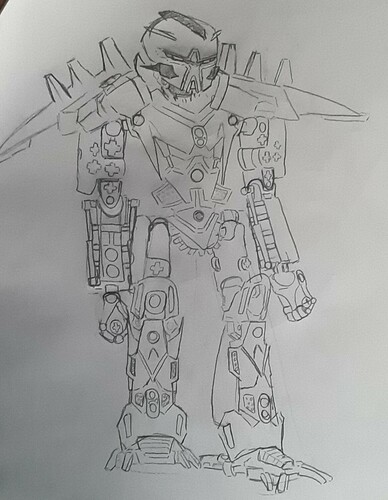 As you can see this is a rough sketch. I’ll have the weapons drawn in a later post but this is a take on what the main character could have looked like. I do know that the armor on the upper arms/legs are keetorange, the torso armor piece and Stronius armor on the shoulders are keetorange, and those new armor add-ons you see on the legs are probably keetorange with black legs underneath (giving him a look where he has black “skin” covered with yellow/gold armor)

I apologize, I wish I was a digital artist but I gotta invest in a tablet.

As for the design process for the armor parts. 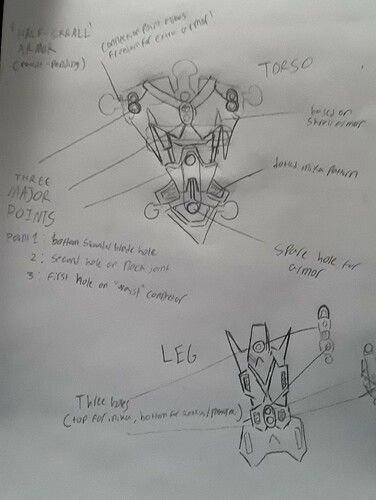 The movie treatment mentions how the characters are decked out in Skrall armor since the last movie. Now the easy thing would be to just slap the skrall armor piece everywhere, but these are being designed as if they were “new sets” from that time period. As such, I made new parts that combine the Skrall aesthetic with others from throughout the line, creating a new torso armor piece and a new leg add on. I have ideas for more unique parts I’m drafting. I also know next to nothing on 3D printing but I’d love to make these someday if possible lol.

Hope you guys are at the very least interested.

So what are you trying to do. Draw or build that

Nice idea, good luck with this.

I wish I was a digital artist but I gotta invest in a tablet.

I use an app called Ibis Paint X that’s really good for illustration and it’s free to use. I would clear the white in the sketch layer and then color in another layer underneath. Great concept btw

I got a friend that uses that, might look into trying it out. Thanks!

It looks pretty cool. I’ll be interested to see more of what you’re working on.

I’d like to add to this thread daily but I doubt I’ll be able to unfortunately. Won’t stop me from trying as much as I can though.

You’ll notice that Mata Nui is lacking weapons. The “treatment” for B5 has no mention of Click which means he’s probably like dead or chilling at the Mega Village or something. Unless they were gonna write him in at some point provided the movie would actually be made.

Point is I gave him the Sword because 1: the Scarab Shield looks dumb and impractical and 2: He uses the Sword more anyway so it makes the most sense.

Now as many of you should know, every single wave of BIONICLE has at least like one or two new weapon molds (excluding the Stars of course, but that’s due in part to budget limitations.) To make it a little easier, I conceived a new “universal” weapon piece that the characters would use to build their elemental weapons, so not only do they have a running theme with the weapons that make them look like part of a group, but it encourages customization and variety. Mocists would have loved it. 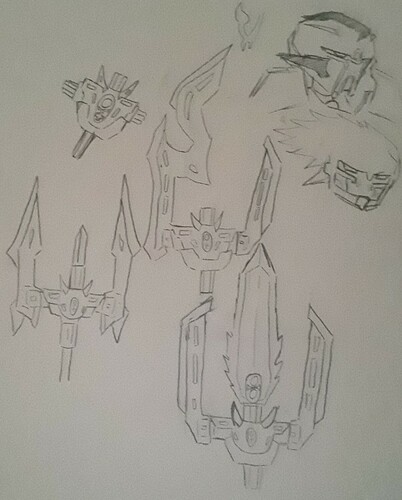 The base part here is based on the scarab shield part’s handle bit and carries some of the aesthetic from it as well. Mata-Nui’s builds his obnoxious large sword, Kiina’s makes the end of a trident, Ackar a sword, etc. Ackar’s sword is rough but when I finalize it it’ll look something like a flame slowly becoming a true sword towards the top. I think I’m also gonna use this on the Skrall character mentioned in the treatment as well. I believe that the plan was for him, along with the main three characters, were planned to probably be the summer 2010 sets so that part would probably release in that wave. Some characters that I think weren’t like “Oris” won’t have that part (I’ll elaborate in a later post.)

very cool, sometimes not knowing what they looked like bugs me too when i reread the movie treatment

i was wondering why i was linked to this thread then realized that was my thread u linked too asking about the movie treatment; yaaaaa, people acknowledge me!

We share a struggle lol, but it’s good not being alone in this

I sure hope Click isn’t dead, he’s too important a character!

Though, I’m not quite sticking as closely to details in the treatment, such as Tera and Likus being Glatorian or Mata Nui and co. using Skrall armor. I know that might bug some people but rough movie scripts tend to change a lot, especially since it’s a toy company and I’d assume there would be changes in set design to appeal to kids more. I feel like Lego (or whoever) would have wanted the comic relief to not take up a canister set spotlight. As for the Skrall armor… something about that just feels like it wouldn’t have happened in their set designs.