Greg, when you wrote “Barbed Broadsword” (in Dark Mirror for instance), did you mean a broadsword in the sense of a type of basket-hilted sword with a broad double-edged blade? Or did you mean a two-handed claymore? The term “claymore” is also used sometimes about a Scottish variant of the basket-hilted sword, by the way, and the other type of claymore (pictured below on the right) is also of Scottish origin. Just some history for ya all! 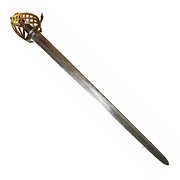 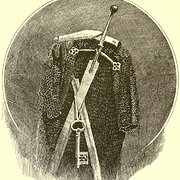 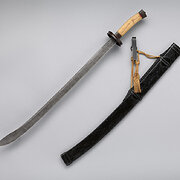 I know it has those curved spikes on each side. I assume those are flat?

With what effort you did to study this, I applaud you. However, this is Bionicle we’re talking about. Even their “regular” sized swords are more broad then a real life broad sword. The closest I’ve seen to what you are asking is a drawing (although I think someone has made a model) loosely fitting the Chinese broadsword pictured above.
https://vignette.wikia.nocookie.net/villains/images/6/6d/Tuyet_color_with_broad_broadsword.jpg/revision/latest?cb=20171120093009
A black blade like that from Tuma also seems to be a popular choice for MOC creators.

The thing is, that drawing doesn’t feature a proper broadsword to my understanding. All kinds of “broadswords” I know of are double-edged. My question isn’t of how broad it is, however. It’s more of the length and whether it is the kind of “broadsword” with a basket hilt

I’ve always loved that drawing though. I saw a shapeways/Thingiverse model with both sides barbed toot that I really love! https://www.thingiverse.com/thing:3396988 I think it would be extra cool with the basket hilt though

I like this design, but keep in mind that Tuyet’s sword does more damage when you pull the sword out of the body, than when you thrust it into something. 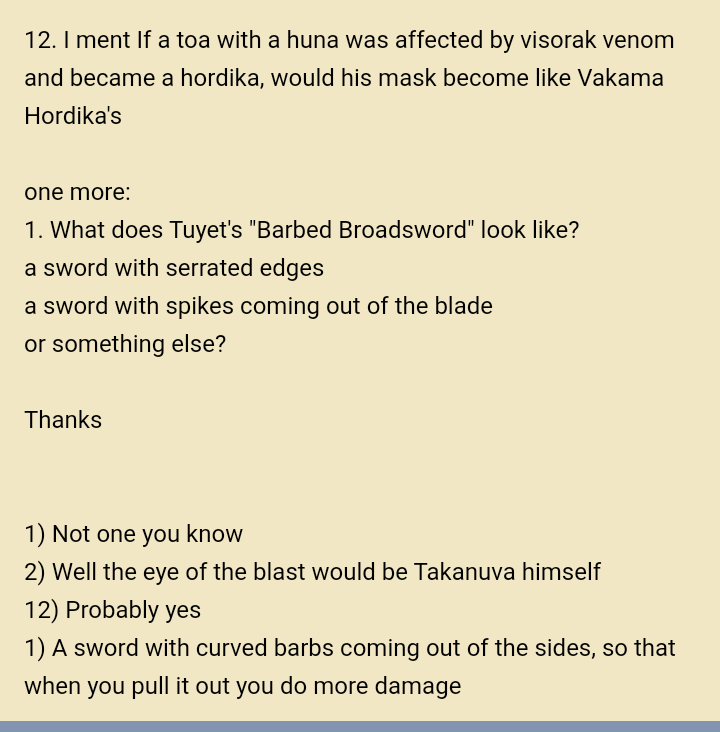 I personally am just going to be making a spiked zweihander, or possibly an executioner’s sword. I think it’s things like this that we should take our own creative liberties with.

Are you completely sure about this one? I’m pretty sure that the term ‘claymore’ refers the Scottish version of a b*stard sword, usually an English or German blade with a Scottish hilt, traditionally with downward swept quillions. I’m not totally sure, I could be wrong.

Technically the term ‘broadsword’ could apply to several different swords, although I think traditionally it’s what a double-edged basket-hilted sword would be called. tbh I’ve never once in my life heard of the Chinese variant.

So does the one I linked. It has the curved spiked. All I want to know was whether he meant basked hilted or claymore. Both are doubled bladed, both had broad blades.
@Solar_Claptrap There doesn’t exist any one definition of what “broadsword” is. In fact, historically it was never used as a term while any of these weapons were actively in use. Btw, yes, I am 100% sure. Wikipedia states that “claymore” is a term that can and has both been used to describe the Scottish version of a two handed medieval sword and a term for a basket-hilted sword of Scottish origin. And “claymore” in general is sometime called “broadsword” by people today. Both kinds. In addition, “broadsword” is also a term used for the basket-hilted sword, which is basically a rapier with a flat, broad blades with two edges. It’s all three things - with the basket hilted kind apparently being the one mostly referred to as a “broadsword”.

The problem is, if you want to make a wiki for BIONICLE in a different language, you have no idea to call items like these where there are multiple definitions. We do not have a Danish term for “broadsword”. Well, we have huggert which is the basket hilted kind, but claymore is just called claymore I think. Not “bredsværd.” And neither is the huggert. Huggert is just the only translation of the word “broadsword” I’ve seen in Danish dictionaries.

Btw, I believe Tuyet is one of the canon contests, isn’t she?

Very well then. On this matter I believe we as a community have power to decide when the competition for her appearance comes around. As she is likely just a Metru build, after her mask would leave 3 more allowed custom pieces, which could easily be used to create a sword w/ hilt or even two separate parts. Unless if it went the Tahu Stars route with Nuva shoulder armor.

“claymore” is a term that can and has both been used to describe the Scottish version of a two handed medieval sword and a term for a basket-hilted sword of Scottish origin.

Thanks for clarifying. I misunderstood in the OP.

sorry if I came across as rude/condescending, I can kinda get carried away when I talk about weapons

Btw, I believe Tuyet is one of the canon contests, isn’t she?

Yes, I assumed that was why you were making this post … A canonization contest doesn’t mean you shouldn’t take creative liberties.

I love weapon and armour designs, so as cool as Bionicle is it’s also pretty frustrating with its very creative uses of terms like Lewa’s Air “Katana” or Air “Saber”.

Personally, just based on the common fantasy understanding of it, I imagined Tuyet’s Barbed Broadsword as being a straight double-edged sword with a broad, barbed blade, but I agree it would be good to get some more info if possible.

That being said, if we have a Tuyet Canon Contest, it might be cool to just leave that detail up to interpretation so as to allow more creative freedom.

I’d think that it would be most like the two-handed broadsword (It reminds me most of what we’ve seen in most of the sets).