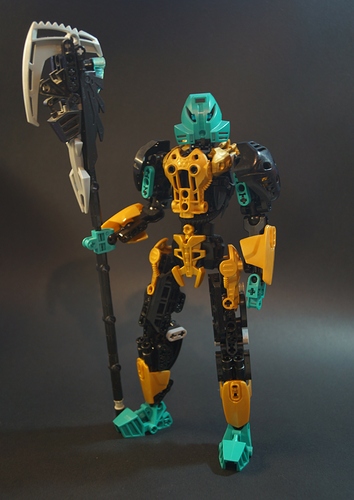 Bellator, a former Glatorian imbued with minor lightning powers following the Ignika’s actions forming New Spherus Magna.
She wears an adapted Kanohi Kakama that she can make limited use of, and wields a bladed hammer that generates a concussive field upon impact.

Bellator was known as an explorer, warrior, and curious soul. She, along with a handful of Toa, took it upon themselves to explore the wreckage of the Great Spirit Robot. 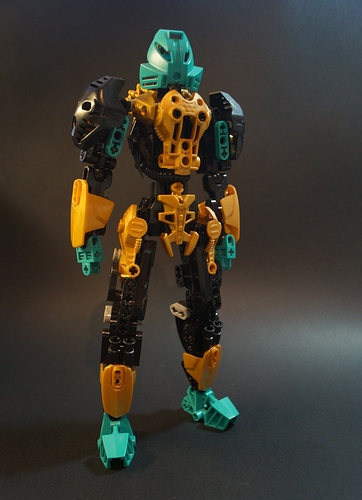 She updated her armour to use Protodermis following her exploration of old Great-Being sites, and forged it into colours that demonstrated her lack of affiliation. 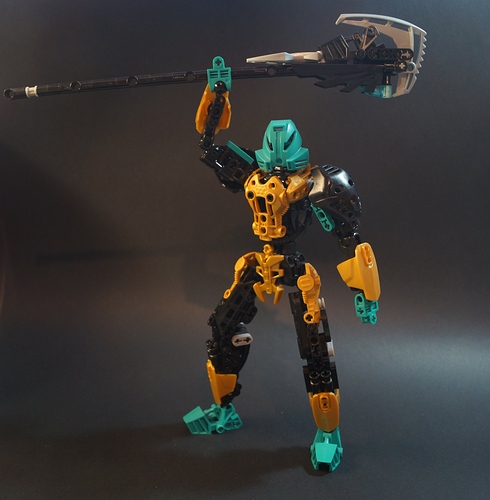 DSC07955 (2).JPG3264×3329 778 KB
With her hammer, she is a force to be reckoned with. Again salvaged from Great-Being technology, it features a gravity-based concussive generator in the head which enables it to shatter most weak armour, and disrupt clusters of smaller enemies.

While generally a loner, she has worked with a small Toa team in the past, and is more than happy to take the lead in combat. 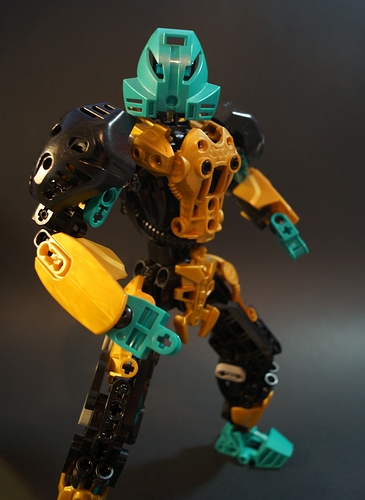 DSC07962 (2).JPG3264×4471 1.05 MB
Here we see her in a fighting pose. She’s inherently a close-quarters fighter, both with and without her hammer. She originally fought with small knives, but they were easily broken, being made of bone. 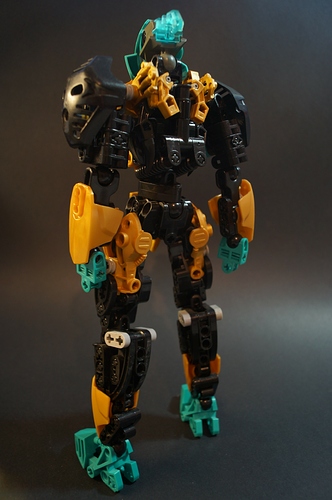 DSC07960 (2).JPG3264×4912 1.24 MB
Here we see her back, which is relatively plain. I was happy to leave this area mostly black, given that most of the parts back here don’t come in gold. Of course, given that the armour itself is not merely gold, but also black, this doesn’t mean she is inherently exposed back here.

The handful of grey highlights are again to demonstrate the ‘hand-forged’ nature of the armour, and that small elements would still be forged from steel/iron naturally available on New Spherus Magna.

This is amazing, it’s not everyday that someone uses the elusive teal on a moc. Aside from that, the build is just outstanding.

This is amazing, it’s not everyday that someone uses the elusive teal on a moc. Aside from that, the build is just outstanding.

That’s about the sum total of the teal I have that isn’t on displayed sets, so I figured it’d have to be a tertiary colour

Honestly it makes it look like her face, hands, upper arms, and feet are parts of her body that aren’t armored. It looks really cool.

This is a really well built MOC. My only complaint is that the characters lacks uniqueness: there isn’t a feature that isn’t quite common.

Shut up and take my money.

Turquoise and gold has never worked so well.

I absolutely ADORE this color scheme. The teal and the gold go so well together. Wish I had some teal lol

I like the color choice. It’s not everyday you see a MOC that combines turquoise and gold.

The design itself is pretty stellar as well, particularly the torso and arms.

From someone who knows Latin, hearing that name being used to sound edgy feels very weird…
(also, if it’s female, shouldn’t it be Bellatrix? I guess it doesn’t matter though.)

But aside from that, really nice use of teal! I also really like the main structure of the MOC; looks solid and seems like there’s a lot of potential in it for customization and adding stuff to it.

I love the color scheme. The build is also very impressive.

From someone who knows Latin, hearing that name being used to sound edgy feels very weird…
(also, if it’s female, shouldn’t it be Bellatrix? I guess it doesn’t matter though.)

Wasn’t really trying to sound edgy, just some very basic google-translate level Latin because naming is not my strong point. shrug
No idea about what it should or shouldn’t be, grammar-wise, but I was figuring that most of the Glatorian names were Latin-based, so misusing a Latin word wouldn’t be inappropriate

That’s some nice color distribution you’ve got there. Cool MOC.

The use of teal is amazing.

The design of the figure is great; nice hammer!

I love the colour scheme, and the backstory and build are great.

Thanks all, glad the colours have been well received