In a time before time, there existed a world called Spherus Magna created by individuals known as Great Beings. Spherus Magna was inhabited by Agori, Glatorian and Skrall, divided into Tribes (Fire, Water, Ice, Jungle, Sand and Rock) which were led by the six Element Lords. Spherus Magna was ruled in peace for many years. However, upon the discovery of a strange substance that was capable of either changing or destroying living things, the Element Lords went to war in order to decide who would get to claim ownership of this substance. Seeing the destruction that this war would cause if left unchecked, the Great Beings began to seek a solution to avoid Spherus Magna’s destruction. One of the Great Beings proposed an uprising solution, in which beings similar to the current inhabitants would encourage a revolt against the Element Lords before the war escalated too far. New beings were created; the Toa (similar to Glatorian and Skrall) would be warriors who uphold a peaceful system, and the Matoran (similar to Agori) would be hardworking people who prefer a peaceful setting. After the Toa and Matoran spoke to the people of the six Tribes, together they overthrew the Element Lords and founded the Nuva Council, as to preserve the peace between the Tribes without the use of absolute rulers.
Yet, in the shadows there were beings that had existed before the creation of Toa and Matoran. Of these beings, some were scheming to conquer. And at the center of this plot was an ancient and powerful artifact: The Biocron… 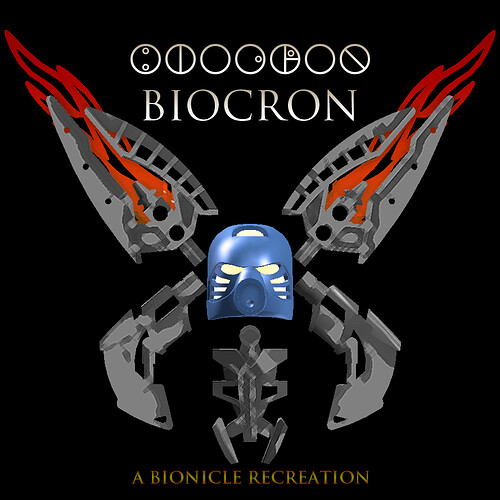 The Biocron.jpg889×889 296 KB
If interested, look for Biocron in the Lego Creations section to view models of the characters.

Branar walked through the passage, every so often looking behind him. He already knew that nobody had followed him, but he wasn’t looking to see if he had been.
“Looking for me?” said a voice. Branar quickly spun around, sword at the ready. An orange Glatorian stepped out of the shadows.
“You know I’m not fond of anyone from the Iron Tribe Telluris, especially you,” Branar said as he lowered his weapon.
“You have an update?”
“Onua doesn’t know anything about the supplies. But, Tuma is becoming more suspicious of their origin,” Branar said as he leaned against the wall. “The real issue is that Stronius has started disappearing every once in a while, and then showing up the next day,”
“So he’s reporting to someone outside of the Tribe?” asked Telluris, although he was probably talking to himself, “Return to your Tribe, I’ll deal with this new turn of events.”
“And I’ll stay out of it,” said Branar, who quickly started to run back the way he came. After the Skrall left, the shadows surrounding Telluris suddenly grew darker, as if light had been cut off from the world. A pair of bright red eyes appeared out of nowhere, seeming to tower over the Glatorian.
“Everything is going exactly as I planned,” said a voice that echoed, “The Mighty Tuma is a fool. He doesn’t even suspect his fellow Skrall of betrayal. But, if the Toa learn of this, the plot will never succeed.”
“Leave Stronius to me,” said Telluris, drawing his weapon. “If he or anyone else poses a threat to the plan, I’ll make them disappear.”
“Don’t fail, for your Tribe’s sake,” said the voice. The eyes vanished, and the shadows returned to normal. Telluris then ran out of the passage. Once outside, he let out a loud whistle. Suddenly, a flying insect-like creature flew towards him. Telluris leaped off the cliff, and then the creature swooped down and grabbed hold of him. On this creature, a harness of sorts connected to the Glatorian’s back. The duo flew off into the Night.

First off, I like the premise of this, it seems well thought out.

I’m not gonna say anything else until we get a full story, but I have high hopes =3

First off, I like the premise of this, it seems well thought out.

So I just looked up “Biocron” on Google, and it apparently means; A human in a tedious and repetitive job. How’s that for a coincidence? LOL!