BIONICLE has already been released and the story is a reboot rather then a continuation of the original story. The sets are the Toa, Villagers known as Protectors, the Mask Maker, the evil Skull Spiders, and Skull army(summer sets). Do you have any favorites so far, if so who, please comment and tell me who you like and why.

Toa: Gali and Tahu, Gali because this version of Gali actually looks feminine, the trident/axe… thing looks great. Tahu because of personal bias

Protectors: Jungle because he has the max amount of articulation, I like his color scheme and that bow

Toa: Gali and Tahu, Gali because this version of Gali actually looks feminine, the trident/axe… thing looks great. Tahu because of personal bias

I personally like Tahu more because of the swords I mean look at them LOOK AT THEM. They’re huge! https://youtu.be/XKyXNGhQwn0?t=11m38s

Personally, I really like Gali and the Protector of Jungle a lot. Gali has the best build; PoJ has the best weapon.

Personally, I really like Gali and the Protector of Jungle a lot. Gali has the best build; PoJ has the best weapon.

I like Onua’s claws mostly because of how good they look, the protectors for me, were ok. It was mainly the mask that bothered me it was the same for every protector. There was no Identity to them beyond color scheme and for me that stunk.

I love them as well,though I haven’t gotten Gali yet. Also Kopakas Adrenaline mode ski.

Toa: Onua and Pohatu, Onua because his broad shoulders and stubby limbs capture his strength though also because of how involved and unique his build is. Pohatu because, though he may be the simplest and shortest of the Toa, I think this suits him, considering he and Onua were the smaller of the two, and his light armoring invokes some sort of runner feel. Not to mention some design choices such as the spikes and the placement of the armor give him an outlander vibe, and the various placements of his Stormerangs add to his playability.

Skull Villains: I like the appearance they gave Skull Warrior, the placement of his armor (or what lack of it there is) really pulls off the decayed look the best out of the bunch.

Skull Villains: I like the appearance they gave Skull Warrior, the placement of his armor (or what lack of it there is) really pulls off the decayed look the best out of the bunch.

I agree the skull warrior is my top pick for the whole robotic decay feel, yet I can feel more of that in the Skull Grinder mostly due to his mask and small horns

I don’t particularly like CCBS thus I didn’t actually buy any because I don’t want any more CCBS parts that I 'aint gonna use but they are admittedly innovative and nice looking.

Was never a fan of red Bonkles, but Tahu just looks epic. Like… Godly epic. Mah fav.
Kopaka is ironically my least fav since I always loved the white Bonkles. But he just looks…bland.

I would say Skull Basher.
Due to him looking cool and he has the best class representation out of all of them.

Lord of skull spiders is my favorite. The function is great, as well as the color scheme.

I don’t have any yet; I’ll have Onua and Protector of Earth next week, and I’ll give my thoughts then.

Toa: Gali and Kopaka. Gali looks great in both mermaid and giant-axe-wielder forms, and her mask is probably my favorite. Plus, unlike Tahu and to some extent Kopaka, she doesn’t overdo it on the armor to justify some price tag. Elegant, balanced, and therefore my favorite. Kopaka is my favorite of the $20 sets, mainly because he manages his armor layout much better than Tahu (who looks like he was stretched too much, IMO) and isn’t as ridiculously proportioned as Onua. He manages to look bulky and bundled up without sacrificing too much articulation anywhere except for his knees. Tahu and Onua are my least favorite because of the aforementioned reasons.

Protectors: I like the PoF and PoI for their appearance, even if they are somewhat lacking in articulation, and the PoJ for his weapon. The PoS is okay, mainly for his ability to pull off a “Say hello to my little friend!” pose, but if the choice was between him and the PoJ I’d choose the latter. The PoW can’t pull off any good poses on land but looks fine in water, which isn’t much help since I don’t display my sets in water. Still, the PoW would make an excellent piece of decoration in a fish tank. PoE is my least favorite because he simply tries too hard to be different, and sacrifices a lot in the process. His star drill is iffy compared to the weapons of other protectors, the throwing daggers are pointless, and besides the gatling gun on his chest, he doesn’t have much going for him appearance-wise. No verdict on the Mask Maker yet.

Villains: LoSS is nice as a homage to the rahi sets of '01, but isn’t as good in the appearance and display category. As for the summer skull villains, I’m planning on getting all of them when they come out, but the main ones that I’m excited for are Skull Grinder and Skull Warrior, because their masks simply look awesome.

gulp … Pohatu is my favorite. He is the simplest and shortest but I think he looks cool. I like how the new mask looks like it filters the sand out of the air so he can breath. Also I like the hole “waste-lander” vibe. My second favorite toa is gali because I like the legs and the colors.

My favorite protector is the protector of earth. He has a great color scheme imo and I like his construction. Loss is cool. I like the skull villains more than I think a lot of other people do. My favorite is warrior because he looks more like a skeleton than the others do. The others look more like demons to me (especially grinder).

One more thing I want to say is I don’t like the twenty dollar toa. Don’t take that the the wrong way, because they are great sets. I just think if they were all fifteen dollar sets they would all have silver instead of half of them having gold and look more like a team.

The others look more like demons to me (especially grinder). 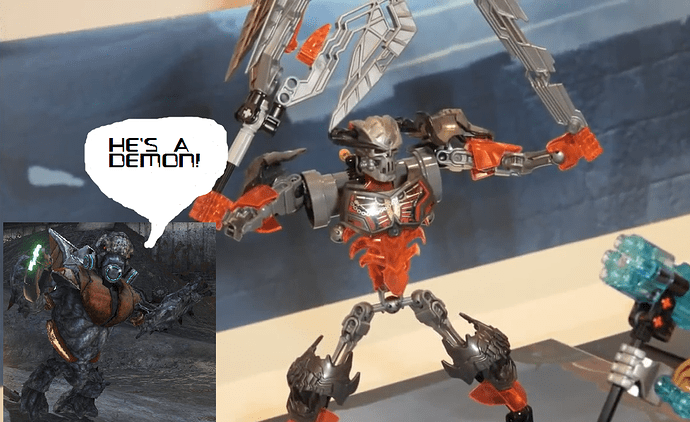 I’ve been waiting to use this picture

We went over this already. He’s AZOG THE TERMINATORRRRRRR.

About sets that I like, my favorites so far are Tahu and Kopaka, for proportions and color schemes, and other various reasons. Lot of people don’t like Kopaka with gold, but I think it’s fantastic. I am very glad with gold on Kopaka, it’s so neat. His shield is on a weak side, but acceptable.
Then, I like Gali. This new blue is adorable, trans blue adds water feel and yellow adds a submarine mood.
Onua is interesting, he have a unique build, but I would like his thighs to be wider. His upper torso is just too big and hips are so narrow. Looks not very natural to me. Also, his arms seem to be weak looking to me.
Lewa is fun. He’s a little squarish, which is nice and reminds me of classic robots. I like Keetongu orange on him, but I hate his neck articulation, it’s really lacking.
Then comes Pohatu. He’s so basic as he possibly could be. Very short, it makes him look out of place, like this team is made of five heroes, but he really wants to be also in. I like his color though, it’s nice. Don’t like his weapons.
Spikes are cool, and it’s nice that this set comes with extra pair of it; I’ve placed it on his other arm and it is making him look better to me.

Protectors are cool, but it would be nice to have more variety of masks in 2016.
Most of them have very narrow shoulders and I don’t like that. I prefer protector of fire, because at least he looks beefy, not narrow. Would be good if they were something in between.

Lord of spiders. I have never seen it live, but the set looks pretty nice to me. I don’t like two things here: printed face, spider’s size - it is so small, not serious at all; I wanted to buy it, but it’s out of scale to me, so I pass that.