EDIT: Topic has been archived due to massive amount of posts. Please continue the discussion on the new G2 topic here.

Since we’re not expecting anymore “leaks” of sorts anymore, with the advent of finalized pictures, we’re gonna start a new topic here to discuss only the finalized images and anything not containing a watermark.

A brief request: Whenever new images do surface, please don’t spam them all over the topic. I’d greatly appreciate it if you all linked them instead. It’s easier to view and navigate the topic that way. Thank you, and happy discussing!

This topic is obviously enough for discussion regarding the Bionicle 2016 storyline and sets. We encourage discussion and even some friendly debate from time to time. However, a lot in this topic is very easily seen as clutter.

Because of that, I’d like to impart a few things to you all.

Please stop asking for updates. If you were away and there was a new piece of news, either check our channel, PM a member, or check Reddit. That post is nothing but clutter for something you can look up yourself.

BE CIVIL. My gosh, I don’t know how many times I’ve had to say this on the boards, but just because you have an opinion doesn’t mean you can shut others down because of theirs. You are ALL allowed to voice your own opinions. However, do not do so as though yours is better than others, or act as though someone else s opinion shouldn’t not have been said at all. I’ve spoken about my opinions, and people disagreed. That’s fine. And if you want to discuss an opinion, that is fine as well. Just be CIVIL.

Don’t go off topic. Just please don’t. It’s spam. We have a lot of topics for different subjects, and if one doesn’t exist then you can make one for that discussion.

Please flag offending posts. That alerts us to problems so we can handle it. It’s really, really helpful.

Use proper grammar. It’s in our rules, please use proper spelling and grammar to be better understood.

Please read the rules. They’re how we keep these Message Boards a fun and enjoyable place for everyone.

Thank you, and keep enjoying the discussion guys.

However, that’s really why I’m making this post - while the discussion was fine and the posts have been moved, this topic was not the place for that discussion to be held. It was then classified as “off-topic.”

This has been a constant issue with many topics, most certainly this one in particular. If you guys have noticed, we’ve been issuing several warnings throughout the last two weeks.

This is your final warning. Any at length, off-topic discussion in this topic will from here on out be followed by a 24 hour suspension.

I think it’s interesting that the Toa don’t have glowing eyes. Seems a bit odd, and makes me think these aren’t quite 100% finalized.

Did you really just post a first? Wowjustwow
Anyway, to brickset!

I can only hope that this doesn’t explode like the Leak topic.

So, leak season over? Finally.
Now, do we have any confirmed story?

How about the offical box art pictures? We’re still waiting for them

I want in hand pics,

The part circled in red is what I found odd about her build. How did they manage to make that leg connection?

Alright, so a quick analysis.

Tahu: Tahu actually contained a lot more trans-colored pieces this time around. It gives Tahu a really nice fire-filled aesthetic that we missed last year. In fact, it looks like he has more trans orange than red on this set.

Also, that trans-red and gold mask is beautiful. And the silver parts of Tahu’s mask looks blended to me. Same goes with the rest of the Toa. Could we have awesome Metruoran-esque masks? 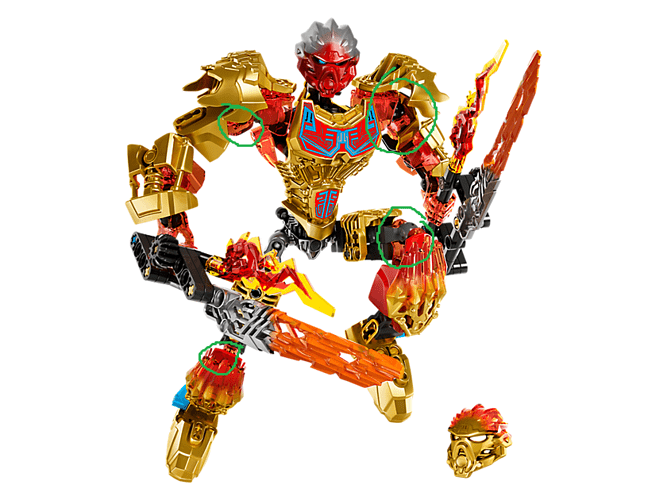 Gali: I still am on the seat on this one. Regardless, she has some interesting parts of her build. 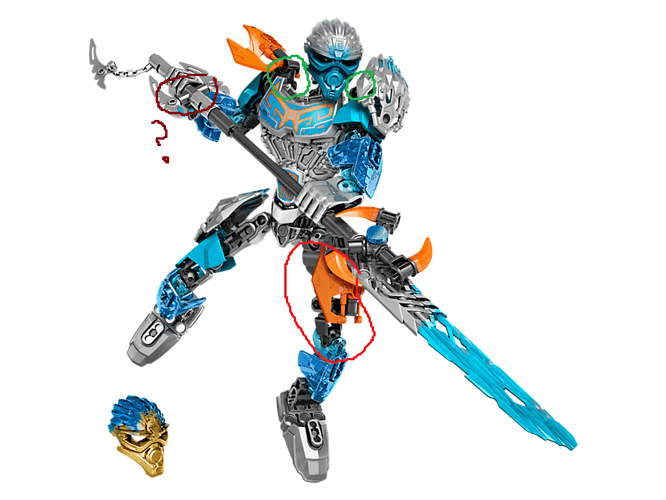 Gali Analysis 1.png840×630 295 KB
The part circled in red is what I found odd about her build. How did they manage to make that leg connection?
The green parts are areas I found to be gappy. Perhaps this is where the shooters will lay down so she can fire them as she swims with the fish?
The part circled in brown is a piece I am not sure of. Is that a new piece, or is it an obscure piece I’ve never seen before?

Other analysis pictures I’ll be doing will follow after this.

That’s a Bionicle hand piece, connected to the vorox armour, which then clips onto a ball joint on the leg. Also, yeah she and I’m assuming many of the other Toa are gappy in order to allow the combinations to work a lot more smoothly. And yeah, that’s a new piece

I really like the creatures; it’s interesting how they can have similar builds yet look unique.
though it might have something to do with the colors, at least in the Melum and Terak

I think it’s interesting that the Toa don’t have glowing eyes.

some of them seem to, so maybe it just has to do with the angle of the masks?

How did they manage to make that leg connection?

It’s just a CCBS bone with an extender. The Skrall Armor is attached via a Mata Hand

Is that a new piece, or is it an obscure piece I’ve never seen before?

Yes, but it appears to be Kylo Ren’s lightsaber piece.

some of them seem to, so maybe it jsut has to do with the angle of the masks?

Perhaps, but if these are finalized then that seems like an odd choice on the Graphic Designers’ parts.

Perhaps, but if these are finalized then that seems like an odd choice on the Graphic Designers’ parts.

Well they didn’t use photoshop for their eyes this time which I can appreciate. So we can see how they really look behind the masks.

BTW if anyone wants to see Kopaka’s finalized image, it’s available in the brickset database. It does now look clear that he has an ammo pack underneath his thigh.

Just a friendly reminder to NOT re-post the pictures in your posts, guys! Please!

We want to keep down clutter!

Well this pretty much explains everything.

Oh my god I’m freaking out about the combos for Pohatu, Onua, and Lewa