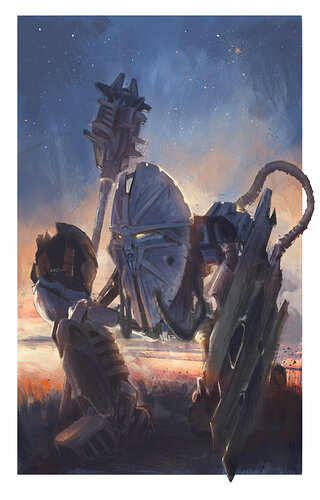 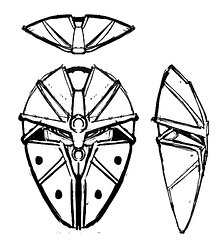 Thank you for stopping by to read this topic.

I originally drew this concept of a Helryx back in 2015. With the conclusion of the MOC portion of the Helryx contest, I’ve concluded that my old mask concept did not suit the new Helryx so I looked to design a new Mask of Psychometry.

As stated in the linked caption, the initial inspiration for my first iteration came from Helryx’s background as the leader of the Order of Mata Nui so I looked to Axonn’s and Brutaka;s masks as well as pre-Colombian headdresses for inspiration.

For the first round of iterations, I approached several different visual motifs to help define the silhouette. I looked at Khing’s and Galva’s take on the Mask of Psychometry as their masks were prominently used in the MOC portion as well as re-using the headdress shape from my original. Also played more with the idea of the mask with a “satellite” affixed to the front. Some members of the community also expressed interest in a more hammerhead-shape mask. I also looked to Voriki’s and Makooti’s masks in a hope to bring their mask to canon.

Initial Mask Concepts - Round One 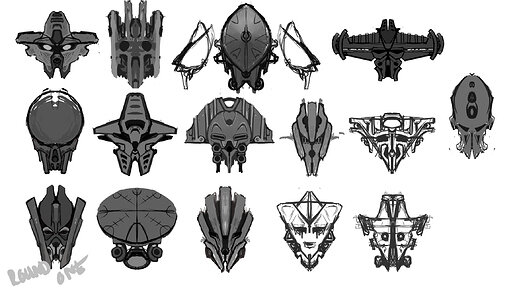 With input from several Discord groups, I narrowed it down to three to continue using as bases for more iterations. 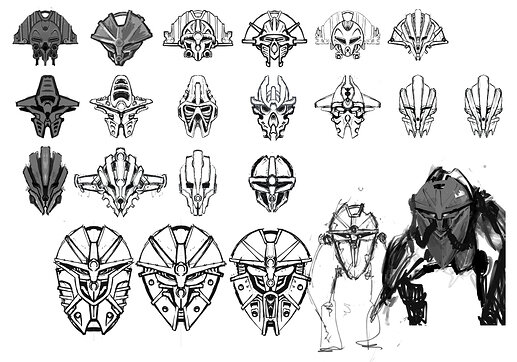 The conclusion of Round Two was that people liked the Voriki-inspired mask and the original iteration. With deliberation, I declined to continue with Voriki with apprehension that it would be too nostalgia-baity. At this point, a week has passed and I would need to move on if I hoped to create an illustration in time for the contest

A spur-of-the-moment decision had me look back to Helryx’s description and tackle the inspiration from there. If Helryx was so frail, what could she have don to alleviate that perceived weakness? Looking back to my original concept, I begin thinking about the Vahi. What if her mask was incomplete, what if there’s a second half? Two quick sketches and I was willing to continue with this idea. 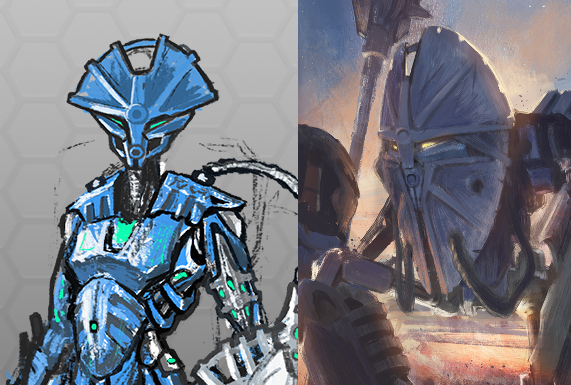 Why carry a shield with a face like that?
Just kidding, I really like this! It has a mystic feel to it.

Ooh, I like this take. Feels like 2001, but with an even more strongly tribal vibe; very fitting

I presume you do Concept work/Digital illustration for a living, because this is some absolutely professional grade work. The mask development concepts are especially superb, they remind me much of what I would see in concept art books from a larger game studio title. What brushes do you use for your linework? The composition of the full-body piece is also top notch to say the least!

The decision to go with such a large mask definitely is an interesting one. I really admire that you were willing to take your piece in that direction as opposed to sticking with a more conventional shape, I think it works really well with the winning MOC.

Definitely one of my favorites =) Best of luck in the contest!

This is. This is stunning me. WOW!

Pardon me, I need to pick my jaw up off the floor.

I presume you do Concept work/Digital illustration for a living, because this is some absolutely professional grade work.

For real, do you? At the very least, what’s your history with art and what do you do now? Literally every single one of these masks is stunning, and the final design is so beyond unique!

reminds me of the Forest Spirit from Princess Mononoke.

For real though, I love this take on the character. The giant mask feels primitive and mysterious. If I didn’t have a dog in this fight, you’d have my vote sir.

What a great squat.

It’s got wonderful coloration and background, looking like a museum painting, but…

I know some people like it, but it’s just too off-putting to me.

I voted for this one just cause that face design is so intriguing.

Thanks for the high praise, folks

I presume you do Concept work/Digital illustration for a living, because this is some absolutely professional grade work.

For real, do you? At the very least, what’s your history with art and what do you do now? Literally every single one of these masks is stunning, and the final design is so beyond unique!

I’ve been drawing art for a long time and studied for animation/illustration. Not in the industry though, just working a regular job.

What brushes do you use for your linework? The composition of the full-body piece is also top notch to say the least!

I used Clip Studio for the piece, the lineart brush I used was called “bit husky.” Not sure where I got it but I assume this is the link

And for the illustration, I used set “Expressive Strokes” from Daub Brushes

I know some people like it, but it’s just too off-putting to me.

I knew it was gonna be an unconventional take from what people would expect, but sometimes you gotta dare and just do it and who knows, maybe it could inspire others, but it won’t unless it’s out there.

I love how much this looks like an old ceremonial mask or something. It really fits the original island-dweller aesthetic that Bionicle began with.