Right at the last minute, here is my entry for the Meet the Maker contest, depicting Artakha as he arrives in the Core Processor chamber in “Reign of Shadows”. Seemed an appropriate scene to take inspiration from as that’s the first look any of the characters get at him.

I’ll provide some more background information on the piece in an update later on, as I am currently running late for work right now!

UPDATE (4th November 2020): As the polls are now open, seems like a good time to finally be adding that background information I promised, if anyone’s interested that is.

Starting with the runes on the body, I knew I didn’t want them covering the whole body because I didn’t want them to overpower the design. I laid them out over his chest and one arm (which is how I’ve always pictured them) because I liked the idea of introducing a bit of asymmetry to the design. I originally wanted them to match the colour of the mask so as to better integrate it into the colour scheme, then I figured it would be a bit of a coincidence for him to have had runes on his body that just so happen to match the mask he won. I like the idea of the mask not matching his body per se. I don’t think it clashes, really, so it all seems to work out

I made the runes up as I drew them on. I like the idea of them being unique to Artakha, unseen anywhere else in the story and a mystery known only to him (and possibly the Great Beings?)

As for the Mask of Creation, my primary idea was to take the G2 design back to G1 - a sort of “how would it have looked?” kind of idea. I compared the masks of the Toa Mata to those of the Toa Masters and found that, though most of them retain the key visual cues of the originals to keep them recognisable, they’re actually more different than they are similar, so I knew I had room to take liberties even within this framework. Hence the face section sharing the same outline as the G2 mask, while the upper portion (while vaguely similar) is very different.

Again, I made up many of the face details up as I drew them in, random shapes and designs to represent cultures and lands of the MU unseen in the story (as there emphasized textareemphasized text many).

I wanted a mix of BIONICLE symbols both new and familiar, hence the Three Virtues symbol front-&-centre of the forehead, Matoran symbols above it, with the same picture of Mata Nui’s face as the one seen on the side of the Great Telescope (I didn’t want to just reuse the “vetruvian man” style symbol that the Mask of Life features) and above that, representing the “heavens” from which he descended, the symbol for Bara Magna as well. I like to think the inclusion of the GT and BM symbols (one being built by the GB and the other being their homeworld) imply his immense age, given that he’s been around since before MN was even fully activated/built.

I was also looking for a way to include the Red Star, given its importance to the GSR. Fortunately, as I was looking up a reference picture of MN’s face on the GT, I also saw how it represented the Red Star, so I turned one of the stars I’d already drawn on the mask’s cheek into that.

As for the rest of the forehead section, the different coloured jewels represent each of the primary and secondary elements (even Shadow, as the mask predates the turn of the Makuta). You’ll also spot the Matoran symbol for creation (from MNOG2) nestled between the jewels for Light and Shadow. The other symbols are actually easter eggs subtly referencing other LEGO lines related or connected to BIONICLE in some way. The small F-shaped-looking one is a nod to Christian Faber (inspired by the Faber Files logo). A couple of them curve up into the left top fin of the mask (our right) - these were inspired by BIONICLE’s predecessors Slizers and Roboriders, and the entire fin is inspired by the Technic building system.

I liked the idea of getting a bit meta and referencing the different LEGO building systems, not least because the base MOC is a fusion of them. I also thought it was fitting for theme of creation to make an allusion to LEGO itself in the design (plus I liked how Makuta’s dialogue at the end of MNOG about coming out of and returning to nothing is in reference to building things out of LEGO and taking them apart again). As such, the fin between the Technic fin and the Matoran fin is inspired by Lego System bricks, and the mask’s right fin (our left) is inspired by CCBS.

The final fin features a direct reference to the G2 universe. With G2 implying a connection to G1 via the two halves of the Mask of Time, I thought it would be fun for G1 to retroactively do the same, so we have Okotan letters spelling out Ekimu’s name (I emphasized textwasemphasized text going to leave you to translate it yourself but you probably already have) along with the Nuva/Uniter symbols and the symbols for Ekimu and the Elemental Creatures.

I think that just about covers the broad strokes of my thought process going into this. Hope you found that little ramble interesting

Oh, and please VOTE! Thank you. 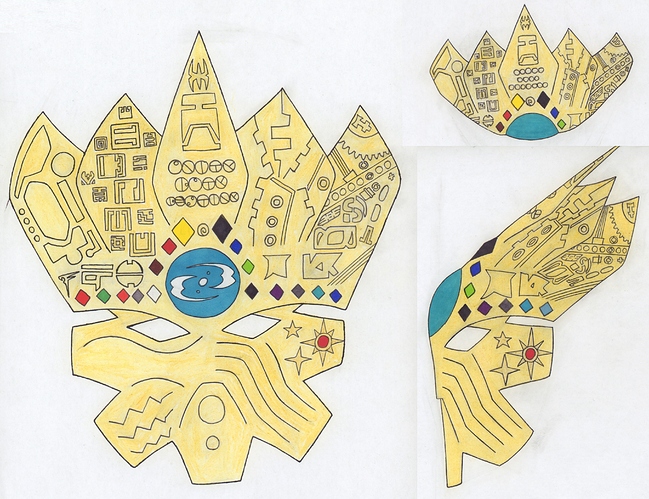 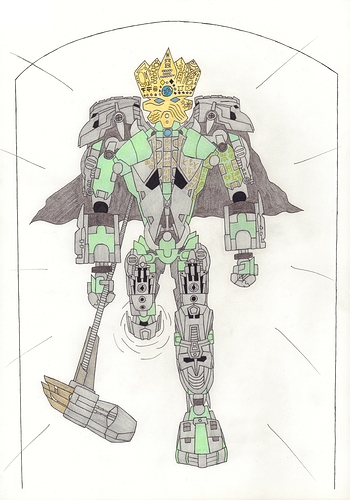 Hope you like it and my Mask of Creation design. Thank you and GOOD LUCK to all other entrants!

I like the mask, is the leg supposed to be bend back? Cause it looks like its missing a leg but Overall good job

Yeah, he’s mid-step through the portal - hence the distortion lines around that leg. They’re meant to be around his ankle, not visible from this angle. I see what you mean though - didn’t leave myself enough time to perfect that, just had to get the design across.

A mask that represents all cultures of the universe it is indeed!! This has got to be my favourite representation of the mask of creation - my own attempt at it seems shoddy compared to yours! This is incredible!

Oh wow! Thank you! I never expected a reaction like that! I’ll check yours out when I get home

Had a look a few hours ago - really great job! Really impressed with all the lighting detail, that’s something I’ve never been very good at. Wouldn’t call it “shoddy” in the least