I like Bionicle and I like chess. Over the past couple weeks I’ve felt inspired to make chess-inspired Bionicle mocs. So that’s exactly what I did. 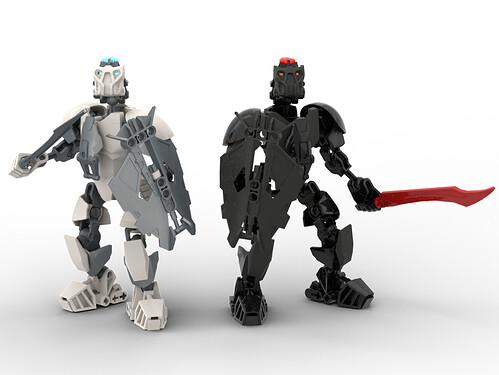 The Pawns1280×960 126 KB
The pawns are the weakest pieces in chess. They can only move one square forward at a time (except on their first move, in which they have the option of moving two squares forward) and have the odd distinction of being the only piece that does not capture in the same way it moves; they can only capture one square forward diagonally. They make up for their weakness by their numbers and can promote to a piece of greater value if they make it to the back rank.
Seeing as you are meant to have 8 pawns of each color, these figures are designed to be incredibly simple, wearing small CCBS armor and wielding the most basic tools imaginable. The only real tricks to their construction is the head: Studio trickery is required for the render, but this method discovered by JangBricks in 2011 will suffice in real life. A curious coincidence is that because there on 8 pawns on each side of the board and there are 8 different Krana types, you could give every pawn its own face (A pawns could have the Su, B pawns could have the Xa, etc.). 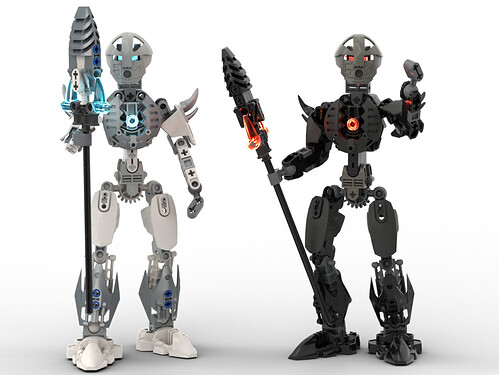 The Bishops1280×960 168 KB
The bishops can move any number of squares in any diagonal direction until they are either blocked by or capture another piece. The consequence of this is that a bishop can only ever see half of the board. A bishop pair, often called the light- and dark-square bishops after the squares they can see, is a force to be reckoned with, especially once both come alive.
I knew I was probably going to resort to using the Metru build for one of these pieces, so while designing the bishops I figured I’d get it out of the way now. There’s really not all that much to say about these guys, but I really like the staves I made for them. These take inspiration from the crosiers carried by Catholic bishops but aren’t meant to reference any specific person or denomination in particular. I just think they look cool. 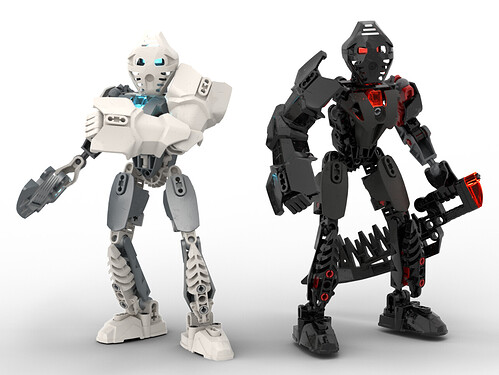 The Knights1280×960 166 KB
The knights are weird pieces in more ways than one. Apart from being the most visually recognizable piece on a standard chess board, they have a most unusual movement pattern: 2 squares in any cardinal direction and 1 square perpendicular, or vice versa (making it the only piece that can attack a Queen without being attacked back). What’s more, the knights have the distinction of jumping over other pieces, potentially making them monsters if left unchecked.
I do wish I could’ve made horse-like mocs, but they would’ve been too big to work with when everything is assembled (sticking horse ears on and calling it a day would’ve been cheating), so I settled on making these knights bigger and better pawns. Probably my least favorite out of this whole collection. 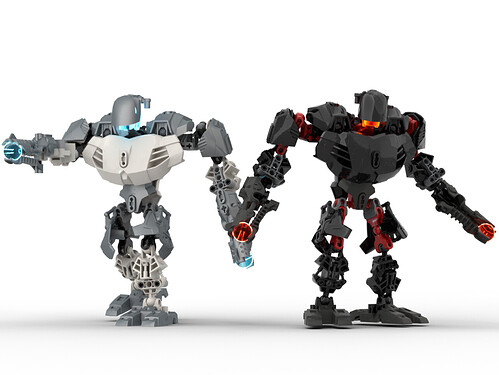 The Rooks1280×960 140 KB
The rooks are one of the more powerful pieces in the game, able to move as many squares as they desire in any cardinal direction until they either are blocked by or capture another piece.
As the rooks are typically represented by turrets or castles in standard sets, I wanted these figures to be much larger than the others, like they’re walls that are difficult to break through. I use Stormer XL feet, Vahki legs, and Onua 2015’s torso to really hammer home that the rooks are supposed to be hulks. The rooks are easily my second favorites out of this collection.

Please ignore that one of the black rook’s legs is backwards. This is a recurring glitch with Studio that doesn’t mirror these parts correctly and I didn’t notice until after the render was already completed. My bad. 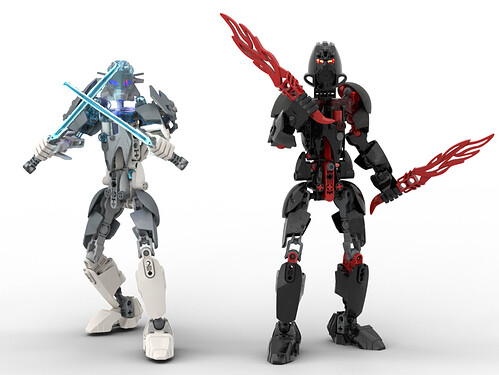 The Queens1280×960 159 KB
The queens are the most powerful piece on the board, able to move as many squares as they desire in any direction until they either are blocked by or capture another piece. As such, it is a good idea to save her for when she is needed rather than bring her out too early, as your opponent will probably take any chance they can afford to harass her. Of course, while it’s usually a good idea to keep the queen safe, she is just as expendable as everyone else and games can be and have been won without her.
The queens were by far the trickiest to design as I am neither good at making feminine bodies nor titan-sized ones. I considered modeling these two after the Queens of Keves and Agnus from Xenoblade Chronicles 3 (link contains spoilers), but ultimately I repurposed Lariska’s torso for them. The arms came easily enough but it took me longer than I’d like to admit before I had my eureka moment with designing the legs, at which point everything else made sense. 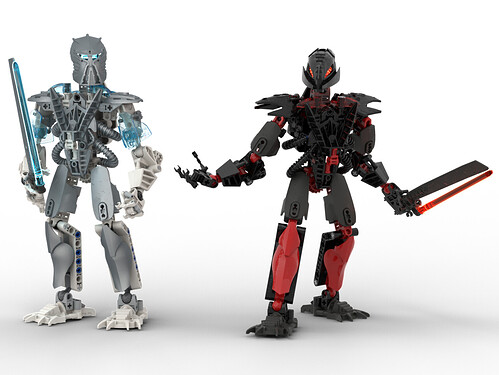 The Kings1280×960 173 KB
No army is complete without its leader. The kings are the most important piece in any player’s army. He can only move one square at a time, but his safety is absolutely paramount. If he is in check, that is being attacked, you must do something to protect him (moving him out of the way, capturing or blocking the attacker with another piece, etc.). If you cannot save the king, you are in a state of checkmate and have lost the game.
These two are easily my favorite MOCs in this series. The legs are, once again, repurposed from Lariska and the torso is based on Hydraxon’s, even down to the tubes, but even so I’m quite happy with how these turned out. The trickiest part was attaching the Skrall armor to the black king’s shoulder to contrast the white king’s Matoro Mahri armor but even then these figures came together much easier than the queens.
I didn’t really intend for these to invoke Mata Nui and Makuta, but that’s what happens when you use these masks in tandem, I suppose.

To wrap things up, no chess set is complete without a board. 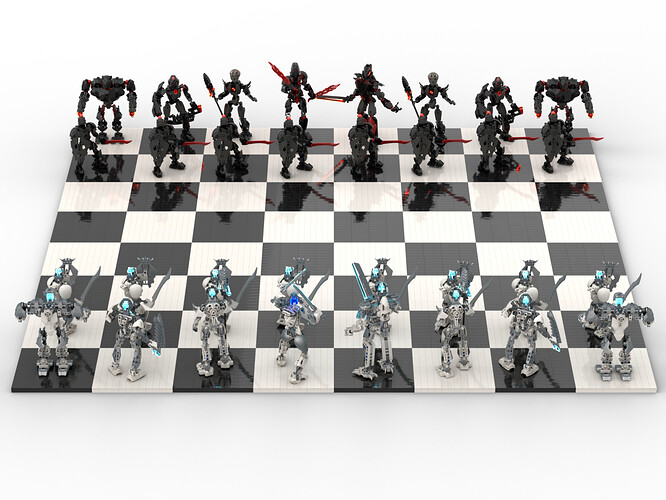 The Board1600×1200 345 KB
I have little to no System MOCcing experience so I constructed the board using the simplest, most rudimentary techniques possible. Each square is an area of 24x24 studs and every four squares takes up one 48x48 baseplate. Suffice to say, this is a really big board (I was actually kind of scared to render something this big).
30 Likes
MooCowsRock September 18, 2022, 2:57am #2
InChandyWeTrust:

This describes me pretty well, too. =P

This looks like an awesome undertaking, born from a great concept. I’ll agree immediately that the knights are my least favorite, as I’ve always associated some notable measure of agility with the piece and this design doesn’t really match that–it’s relatively generic and not particularly well-defined. I definitely see the problem with making horse-ish things instead, though.

As for the rest, the pawns are, well, pretty much what I’d expect; I like the thin aspect of the bishops (the staves and hands are great!); the rooks are very thematic, though it’s weird to see them with limbs given their usual cylindrical shape is pretty parsimonious feature-wise; I really like the queens, particularly their height and litheness; and the kings are, fittingly, the best of the bunch to my eyes. The detailed torso kind of evokes lavish accoutrements, and they just look very solid.

Fantastic work overall! I wish I could play a game with these.

the rooks are very thematic, though it’s weird to see them with limbs given their usual cylindrical shape is pretty parsimonious feature-wise

Honestly, fair, but I think it’d be even weirder to try to make a Bionicle MOC without limbs. Also I had no idea parsimonious was even a word until today.

Neat, reminds me of Jang’s Battle for
Kydea mocs from back in the day.

I have little to no System MOCcing experience so I constructed the board using the simplest, most rudimentary techniques possible.

this makes me curious as to what a “complex” BIONICLE-stylized chessboard would be like. Most chessboards I’ve played are either simple fields or boxes with the board on one side, but I know LEGO has put out more stylized chessboards in the past. I wonder if you could fit the Nuva Symbols representing the different pieces’ starting position into a 24x24 mosaic?

That was actually what inspired me to begin this project in the first place.

really cool build, it would be pretty cool to see it in some others scales

I wonder if you could fit the Nuva Symbols representing the different pieces’ starting position into a 24x24 mosaic?

You probably could. There are 6 Nuva symbols and 48 is divisible by 6, so I suppose making a board with those patterns is possible.

Also, the Nuva symbols themselves are 8x8 pixels, and 24 is divisible by 8, so you could easily make each square a Nuva symbol.

Pretty nice. While the Names are weird to me (as the chess figures have different names here) the models based on them are pretty cool.

These are what the pieces are known as in English. What are they called where you’re from?

What are they called where you’re from?