As shown in @TrolloToa 's post here: Somewhere in the DC Universe there's this tablet with an image of the Toa Mata on it. Could it be possible that the Bionicle and DC universe both coexist in the same dimension? Just... Really far apart in space. Both franchises have a multiverse, so maybe they have the SAME multiverse of parallel realities. Sucks to be in Earth-2149

So what other franchises could co-exist with DC and Bionicle?
While highly unlikely I was thinking maybe the Great Beings could also be the "creators" of the Transformers mentioned in Age of Extinction(after leaving Spherus Magna). 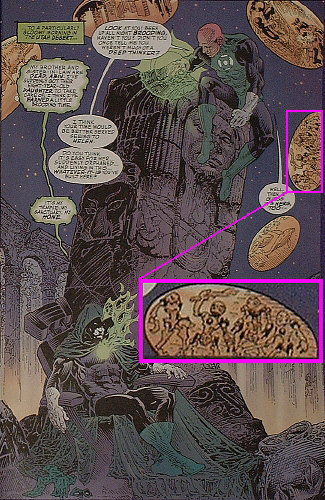 This can't exactly be canonically proven, but I always imagined that all the original stuff that was in Lego sets (DC Comics and Marvel get their own respective universes) all happened somewhere in the same universe/world. Meaning, that Minifigures could potentially find Spherus Magna, or Toa could find the planet that houses all the stuff that takes place on an earth-like planet.

Idk, it just helps me process stories. Oh, and that thing about Bionicle existing in the same universe as DC makes me think that Minifigures and Humans could potentially co-exist in the same universe, with Humans on Earth n' stuff, and Minifigs on... their planet. This has gotten kinda long winded.

pretty sure if ur a basic/lvl2 user u can do it. Just new users that're lvl1 cant

I've written some Tumblr posts about this...basically, my theory was that this comic was Pre-New 52, so they were a part of the post-Crisis Multiverse. Bionicle's last serial was released June 2011 and then Flashpoint took place September 2011. Basically, Bionicle "ended" because Flash rewrote the multiverse.

Also, there were several theorized Earth-Bonkle counterparts because of the pre-New 53 universe:

Velika, formerly part of an alien super scientist race escapes from an exploding planet in a metal spaceship and finds a new home in which he tries to disguise himself and dwell as a normal inhabitant there, is Earth-Bonkle's Superman.

Takanuva, possessor of an ancient powerful artifact made by a guardian of the universe that only works on users that are chosen but gives him unlimited light-based powers is Earth-Bonkle's Green Lantern.

Helryx, a no-nonsense leader of a secret government agency dedicated to working behind the scenes and making sure the heroes are sent in the right direction and also keep them in line is Earth-Bonkle's Amanda Waller.

Lariska, a bounty-hunter always in search of money and has no powers to speak of but still a pretty formidable foe who you don't know is on the side of evil or good is Earth-Bonkle's Catwoman.

I'm not sure if I would enjoy having the Great Beings be the creators of the Transformers. Why? Well there are two versions to how Transformers were created. One is that Primus created them to help fight Unicron, or that the evil Quintessons built them as commercial products. I don't think the Great Beings are five-headed, tentacled, egotistical aliens.

But yeah, this is interesting. With the advent of The Lego Movie, we have discovered that all Lego themes exist in the same universe, just separated by boundaries.

Which means that Lego Marvel and Lego DC and Lego BIONICLE all coexist, and links the three themes? How many times does New York need to get blown to smithereens within those first two themes? XD

yes but how not what level to be on

This topic is now closed. New replies are no longer allowed.