Tren Krom ist not a given option, but here it is
https://board.ttvchannel.com/t/next-bionicle-canon-contest-you-decide/55119/375

I find myself with a similar predicament. As Varian’s weapons are stated to be elbow-mounted, I thought of a design for a custom piece for elbow attachment. While I know that it can be pulled off with regular builds, it seems to be fairly restrictive as most custom designs for an elbow attachment would appear bulky, or just straight out not be attached to the elbow at all. But I guess it comes down to how others feel about what it looks like.

(I apologize if I’m rehashing an old discussion)

My thought is that, based on the description, the Gold-Skinned Being is not biomechanical in appearance: “Towering 12 feet high, with gleaming golden skin, powerful muscles, and piercing green eyes, it regarded the assembled Skakdi with the benevolent gaze of a creator. Only the vaguely reptilian cast of its face took away from its stunning appearance.”

Maybe the Gold-Skinned Being should be an art contest only? Because trying to realize this character through a MOC/existing Bionicle pieces which are aesthetically designed for biomechanical characters, would probably be ineffective in realizing this description. An artist trying to base their design off the MOC would have to be faithful to a biomechanical-looking amalgamation of Bionicle parts, rather than focusing on trying to create a statuesque muscular gold-skinned entity.

Also, since there has been virtually no canonical description of Marendar’s nature or appearance, I think doing a Canon Contest of the character is a bad idea because rather than realizing visually a character from the written canon, the contest would be writing the character from scratch through making those creative decisions (what does Marendar look like, what are its weaponry/means of attack, etc).

Currently, the list is set in stone. However, TTV may look into a second list after the initial canon contests are over.

It is nowhere to be said on BS01 or in books (I’ve cheked) that Golden-Skinned Being is purely organical. Aslo, we are not restricted to use only G1 Bionicle parts, so, for example, It would be pretty nice MOC that uses G1 “bones” and system armor, in my own opinion. You can also check this post of mine about Golden-Skinned Being.

While I understand your concerns, the fact that it has skin doesn’t mean it shouldn’t be bio-mechanical. Quite a few characters and rahi were described as having skin, which is something that should be taken for granted as we’re talking about biomechanical characters. The Zyglak have a contagious skin condition and the golden-skinned being is comprised of one Zyglak.

I’m fine with a Marendar contest, especially since descriptions have been provided for the character. It’s up to TTV to provide those descriptions when the contest begins and hopefully enforce them to a reasonable degree while allowing liberties to be taken.

How did you get ahold of this model? I don’t see it on Galva’s thingiverse page.

I’ve found it on reddit, in Galva’s parts pack. Ahd modified it slightly.

Maybe the Gold-Skinned Being should be an art contest only? Because trying to realize this character through a MOC/existing Bionicle pieces which are aesthetically designed for biomechanical characters, would probably be ineffective in realizing this description. An artist trying to base their design off the MOC would have to be faithful to a biomechanical-looking amalgamation of Bionicle parts, rather than focusing on trying to create a statuesque muscular gold-skinned entity.

If it’s supposed to not look Biomechanical, we could very easily use CCBS parts, which look a lot more smooth when compared to the G1 Technic parts. So I see no reason why the Gold-Skinned Being should be a art contest only.
Hearing the description, the first thought that came into my mind was that this piece would work really well for a MOC of that chracter.

I think this piece would also work quite well. Since the golden-skinned being is a combination of various biomechanical beings, it’s perfectly reasonable to not have it just be an art contest. 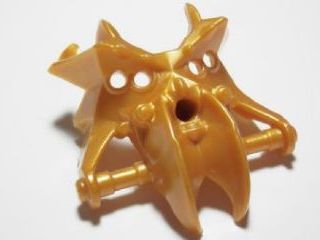 If it’s supposed to not look Biomechanical, we could very easily use CCBS parts

I agree with this. I’m not usually a fan of CCBS, but if one character from these contests had to use CCBS parts, it would definitely be the gsb.

I imagine a build where the blades are attached to an assembly on the upper-arm with a double-joint allowing the blade to be angled.

I don’t know why I did this diagram, but I regret it and now you all can too! (The ‘orange’ joint would likely be waaaaay smaller) 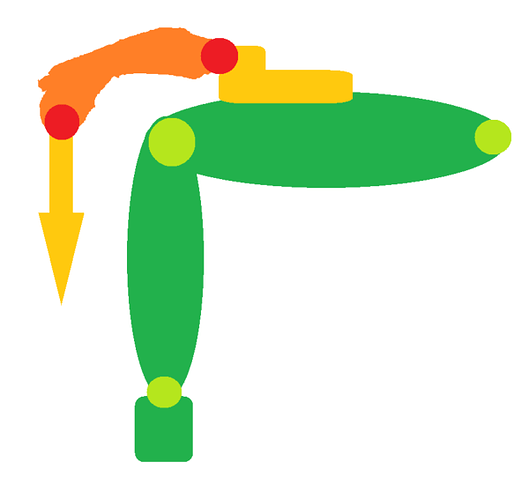 Also, a thought: if G1 had continued for a few more years, it seems likely that CCBS would have been incorporated as another evolution akin to the 2006 sets.

Also, a thought: if G1 had continued for a few more years, it seems likely that CCBS would have been incorporated as another evolution akin to the 2006 sets.

That would probably have happened inevitably. Hero Factory also started out by using the G1/Technic system, but transitioned into CCBS the following year. The G1 molds were very expensive to produce and very early 2000’s-ish, so they would have probably been replaced by CCBS (or something similar to it) either way.

Exactly my point, this design doesn’t even have the blade be elbow-mounted.

I would say that that’s one of the limitations of set design, then.

In canon, they sprout from her elbows. There’s no way to do that, unless you make the moc very big, so they’re simply adjacent to the elbows on the set (or moc, in this case)

Well there are some ways, but very few, which is constraining.

Perhaps I should have clarified, with a double-joint it would allow the blades on the model to be angled as if they were elbow mounted.

If you could pull it off so that it doesn’t look too large or out of place, I’d be happy to see it.

Are people allowed come up with brainstorming topics and link them here or no?

I think this would be quite beneficial for certain characters such as Artakha, the golden-skinned being, and Marendar.