Toxica is the name of the first of the warriors following Makuta Reaper. She love’s poison’s and there effects, so thanks to the self proclaimed Wife of Reaper, Toxica was given the dark element of poison and she was also given the mask of Acid. 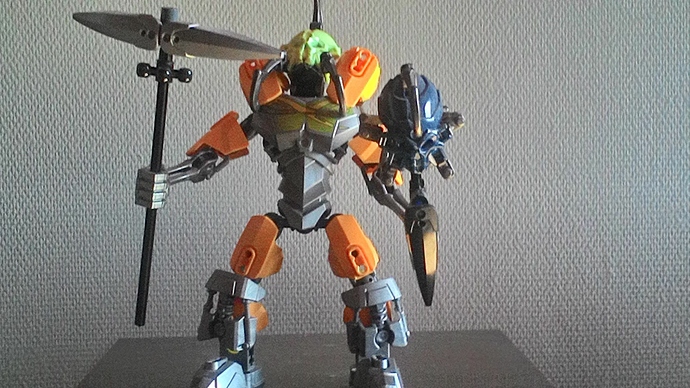 Toxica prefer simple weapons and armor and so she wields a normal pickaxe as her main weapon, but she also have the skull scepter with it she can control any one or creature of a specific element depending on what color the skull spider on the scepter has example blue give’s her power over Ice and water Villagers/warriors as well as Rahi, though the control is not perfect as she can not use her mask power as the scepter take’s aloot of control to use. 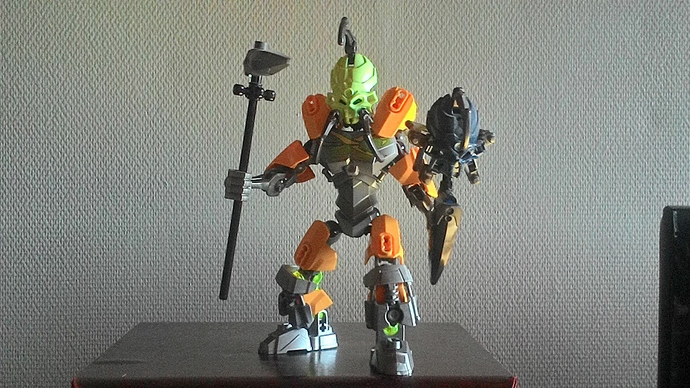 She is seen as the weakest of her kind but she is the one with most selfcontrol as she always has to keep herself from killing her prey as her main jobb is to get information about where to find the great mask of control. 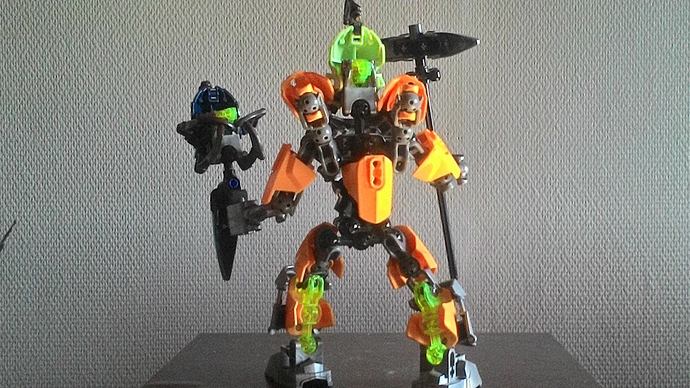 also nice job on this.

Nice. Simple, but it works. Also, is that brown or orange armor?

Looks like keet-orange to me. Nice and simple moc dude.

My favorite part is the Skull Spider weapon. Is that weird to anyone else?

I used the orange piece’s from lewa because they remind me of radiation for some resun, and the green/yellow piece’s are from Pohatu as they always gave me a feel or toxic or radiation as well.

Oh and resun for her arms being like they are is because she tried out her mask of acid on them and melted away the armor and skin that where there befor.

How does that skull spider weapon work, does he launch it at his enemies?

No it is more of a hypnotic trance she puts enemies in think mask of control but restrikted.
Though in order for it to work she needs a skull spider attached to the scepter, though she can lunch the skull spider at a warrior or Toa after they lost there mask though then they fall under the skull spider queens control insted, but if she changes spider to lets say the metal one she can control Fire and earth Toa or Warriors/villagers and Rahi.