It’s been a week since the end of BIONICLE Reiterated. In the finale, there were three MOCs that I built to go against the Toa in the final chapter for my re-written G2 story. In this topic I’ll be taking a deep dive into each one. First off: 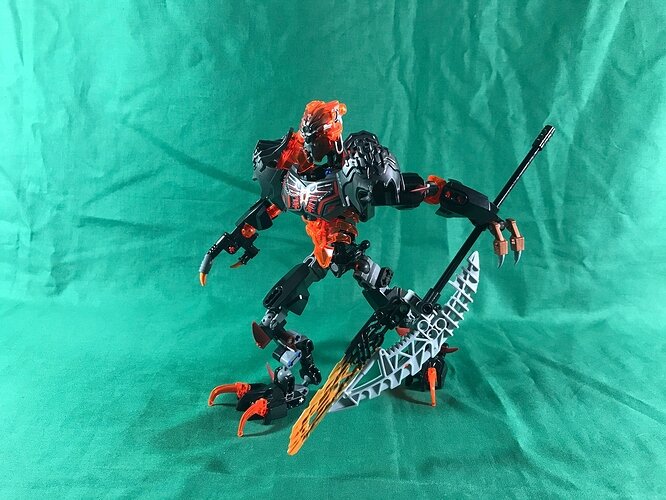 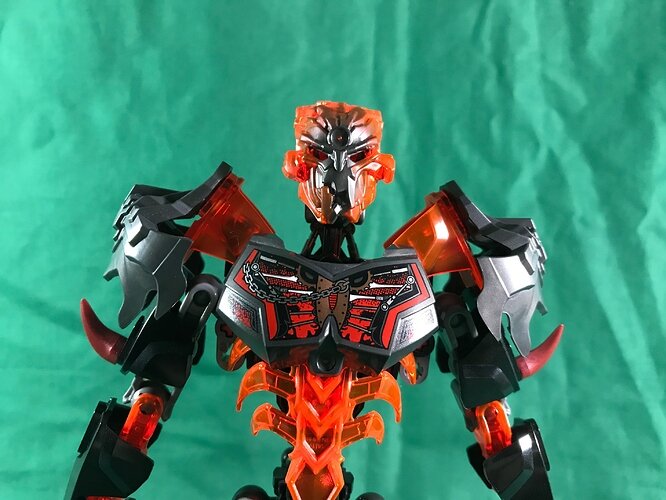 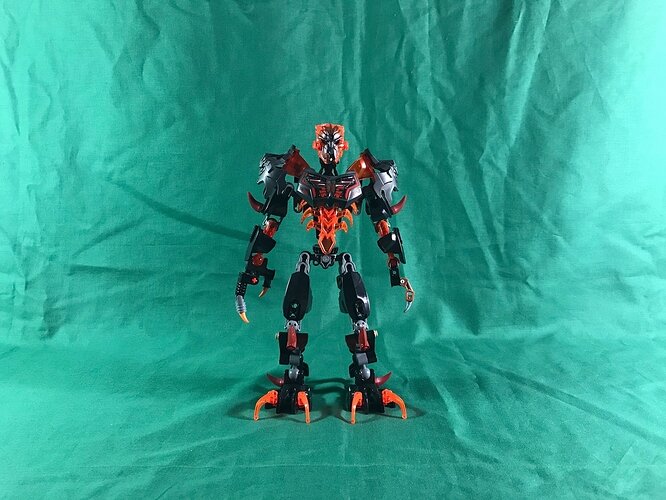 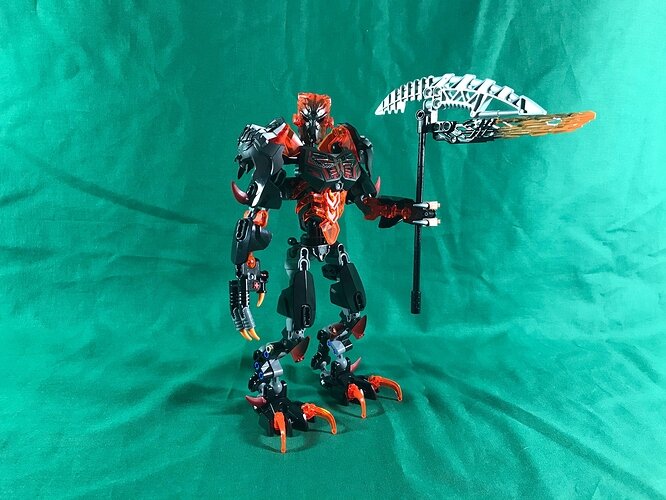 At the end of BIONICLE Reiterated: Season 2, Makuta’s grand plan was unveiled: trick Umarak into wearing the Mask of Control so a connection would be formed between the two. With the connection established, Makuta possessed Umarak’s body, and this MOC is the result.

A main reason it exists and I decided on moving the story that direction is because of the red/gunmetal Mask of Shadows that came included with Ekimu the Mask Maker in 2016. It served no story purpose whatsoever in G2 proper, so this was a way to make it relevant. This is the most simplistic and complicated MOC of the bunch because it’s not really a MOC. It’s Umarak the Hunter but with a red pallet swap and new hands and shoulder pads. His weapon is new, a shadow scythe that can change position to better attack his opponents. What better weapon to give the Lord of Darkness than the weapon of the Grim Reaper himself?

Next is AHKMOU: TOA OF SHADOW 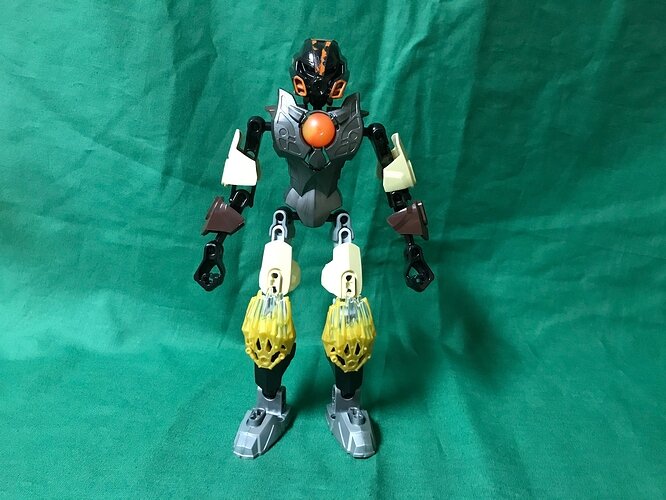 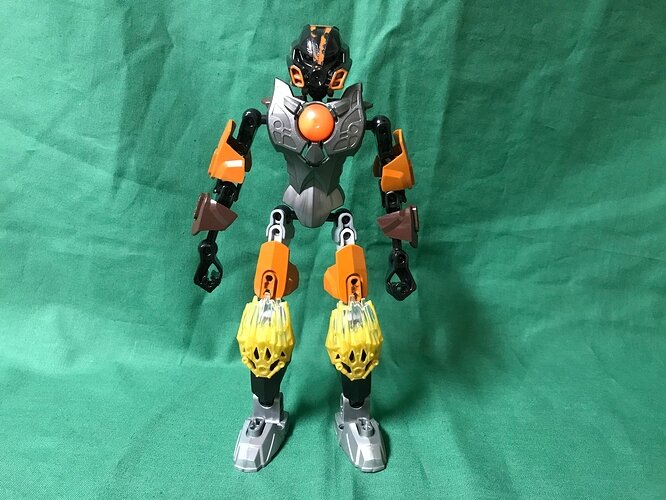 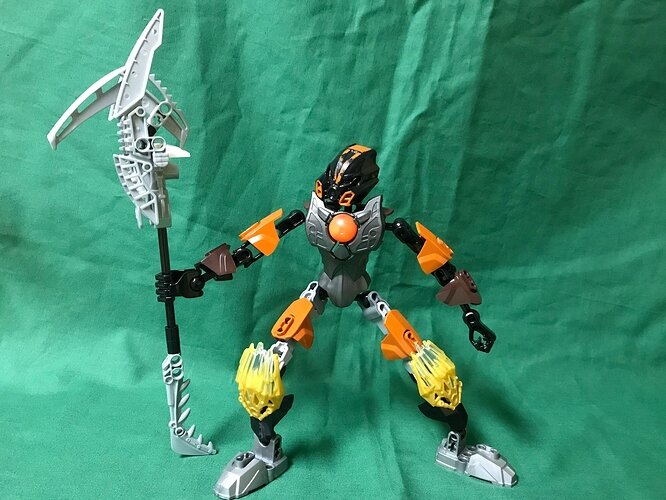 A G2 version of Ahkmou was something that I didn’t originally plan on doing, but once the idea came to me it wouldn’t leave. Ever since learning that the original set concept for '08 Takanuva was a Shadow Toa Ahkmou, I felt a tiny bit cheated and wished we’d gotten that instead. So, why waste the opportunity to do it now?

Ahkmou’s Toa form for the longest time had a brighter color armor plate (first image), intended to match with Pohatu Uniter. However, I got the wrong shade of armor off of Bricklink and when ordering new pieces, decided to switch to the burnt orange from Pohatu Master. This better matched the color scheme of his mask anyway, a Pohatu Master mask that I taped certain spots over and painted black. Some of the paint bled through the tape, adding to the infected Kanohi look I was going for. Had this set been in actual production, it would have had the back and waist gear functions that Ekimu the Mask Maker had, but for my purposes, I didn’t feel like actually adding those on. His weapon is a trident, spear… thing. Basically cobbled together from various G1 pieces that I thought looked cool.

Finally we have The Lord of Skull Spiders 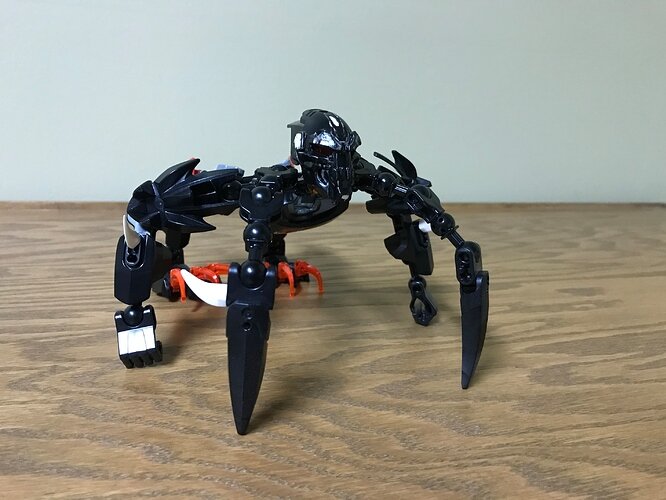 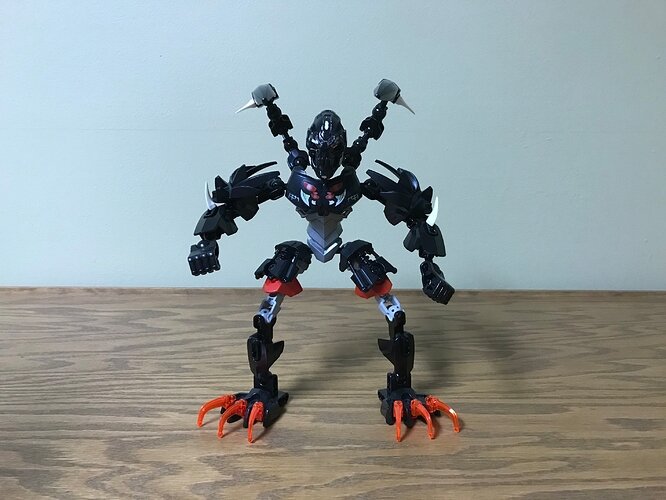 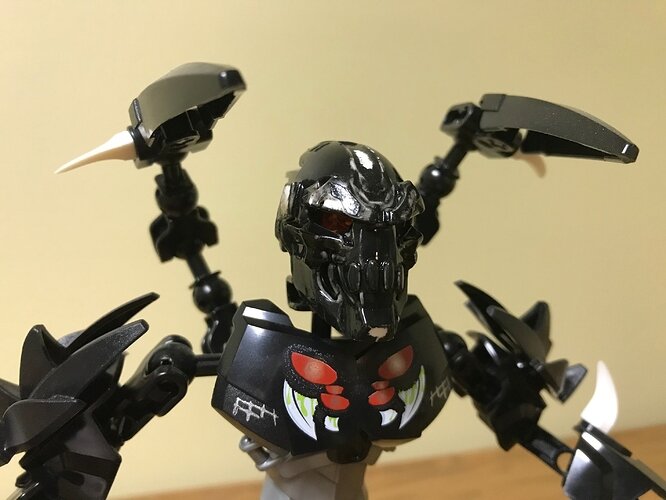 When adding Ahkmou to the list of threats in the finale, he needed a partner to go with him so the Toa wouldn’t just gang up on him. Initial concept sketches I did had an extra set of arms or legs sprouting from his back, so instead of creating yet another new character, I figured why not give LoSS a new, cooler body?

When doing this, it remained important that he’d be able to convert back to his spider roots, which would give an extra reason for the back-arms to exist besides being “cool”. An actual mask was required, and the original idea was to have a black painted Skull Spider act as the mask, but when browsing Bricklink I stumbled on Witch Doctor’s mask from Hero Factory, and knew that it was perfect. A coat of paint later with some white bone still visible, LoSS now had an unsettling new appearance. Had the set been put into production, the arms would’ve been connected to a gear box similar to Skull Slicer.

Never been big on MOCing, I’m quite proud with how these three turned out. As sets that could’ve appeared in 2017, I think it would’ve been a cool final wave (alongside Titan Makuta and Toa Ekimu) to send the story off with a bang. Alas, that’s not what happened. Still, LEGO always provides enough pieces for endless entertainment and imagination no matter your age.

Wow they look cool, really liked that Ahkmou, and you made Lord of Skull Spiders look scary.

Well, these are, um… Unique.

Makuta is by far the most impressive out of the group, and that’s primarily because he’s a colour swapped Umarak with one Lava Beast hand. The colour swap really works however, but the staff/scythe is severely lacking and very barebones.

Poha- I mean Ahkmou, is a CCBS skeleton with armour.
…That’s about it.
The weapon is a step up from Makuta’s.

The Lord of Skull Spiders is pretty unrecognizable as the Lord of Skull Spiders - I get fanon retelling but I think the whole point of Reiterated is “G2 Done Right” so I have room for gripes. The colour scheme has very limited trans neon orange whereas the limbs of the original feature it heavily. The added light bluish grey limbs and the silver torso armour also throw it off further, but what I really can’t understand is why the face is the chest, and the actual face is a humanoid skull?

What I really liked about the LoSS is how the G2 designers were able to add a chest armour with print as an actual face to the set, coupled with added mandibles to give it depth. There’s a lot of good set design neglected in G2 and especially with some of the underrated sets. Here, however, that design element is thrown out the window in favour of a painted Hero Factory skull - something I don’t understand how the Lord of Skull Spiders could have considering he’s a spider.

Then I looked at your written description of the figure:[quote=“prentice1215, post:1, topic:51313”]
When doing this, it remained important that he’d be able to convert back to his spider roots, which would give an extra reason for the back-arms to exist besides being “cool”. An actual mask was required, and the original idea was to have a black painted Skull Spider act as the mask, but when browsing Bricklink I stumbled on Witch Doctor’s mask from Hero Factory, and knew that it was perfect. A coat of paint later with some white bone still visible, LoSS now had an unsettling new appearance.
[/quote]

I have to agree, it’s very unsettling.

Overall, three MOCs that probably line up perfect in the animated headcanon you’ve illustrated through Reiterated, but in terms of the characters they’re representing I think they fall a bit short. They’re all very simple and could benefit greatly for custom limbs or torso - or heck, even both. Plain ol’ CCBS limbs with armour slapped on isn’t very “upgrade-y” to the original and G2 often found some way to break up the monotony of design with unique armour pieces or flat-out breaking the mold by attaching extensions to give new depth or bulk to certain pieces, especially in the first wave.

If you were to go back and redo these MOCs at any point, I’d focus heavily on building customized torsos and limbs - and make the LoSS more of a spider-monster and less of a man.

I used the official sets as reference when writing this, and I own both Umarak and the LoSS.