And you guess it what I’m going to show ya, here we have, The Sleepy Giant itself, Onua, Master of Earth (2.0 version)! 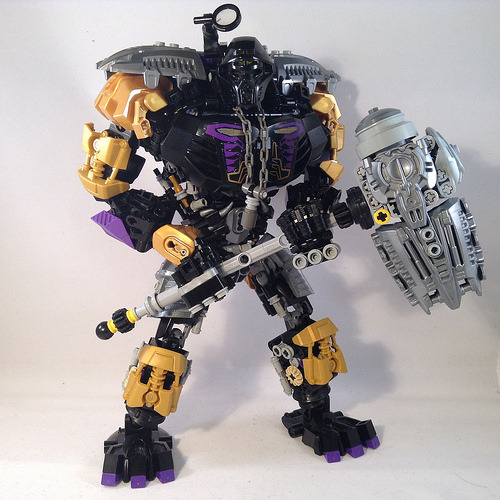 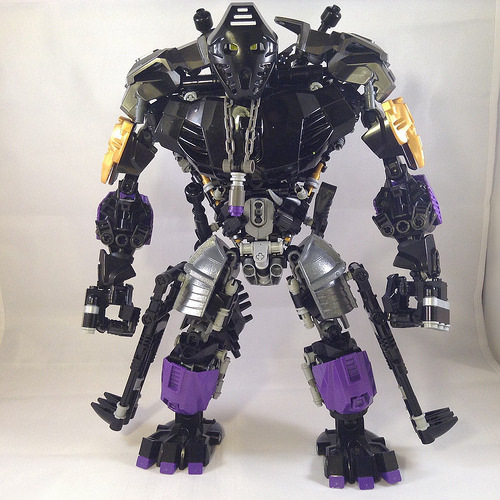 So, how should I say about sleepy philospoher hulk here? Well, obviously, he has a lot of details on everywhere. He’s a bit bulkier, especially the trapezius area are a bit bulkier than previous version of my revamped Onua.
Well, there are no tools and weapons also. I removed quake breakers, pickaxe, club (weapon type), and those claws also. Now it has a hammer, an EARTHQUAKE HAMMER! Good Mata Nui, good thing is that I have built it quickly so it didn’t take like IT’S OVER 9 000(!) minutes, hours, days or years

Obviously, I’m really happy that this is much better than the pre-redesign version of Onua. I have seen some people revamping their Onua into silver or gold, and I mean the armor add-on parts, those new vahki armor parts. Honestly, they’re not bad, but I found out that they’re a bit boring in my taste. I think with gold and silver makes Onua so catchy looking Toa. Overall, I’m happy that I didn’t have to build the torso build this year, that would be pain in a butt.

I concur. The other Toa were good, but this…

Yay Onua finally got to do leg day!

Seriously though, it looks fantastic, and you fixed the issues I had with the official version.

Wow!
This might be the one I like the best.
Very nice proportions and overall design.
Amazing job!

This is my favorite of your revamps. It feels the most different, and it really pulls off the Onua Character. The hammer is also incredibly nice. Overall, I really dig this.

I gotta agree with everyone else. It’s fantastic!

No I like this, looks great, he still looks kinda hunchbacked (that’s a good thing)

That’s pretty schway, if I had ta’ say.

By Mata Nui! This is perfection.

Onua revamp: wishes that it was the official set

It’s these types of MOCs that make me feel bad about myself.

it was indeed a bit skinny in official version of it.

@Ventum
Thank you very much! The hammer was almost frustrating to build

I wishe also if it was built like that way, but I wasted so much parts

@AidanBionicle1
Thank you! And is that suppouse to be a riddle like, more like Onua or the others?