This Self MOC is a cyborg shark. It goes along the lines of General Grievous. In his arsenal, Sharky Sparky holds 2 large tridents, one in his hand, and one on his back. Also on his back, there is a large flamethrower. To symbolize my pet dog, Odie, with this MOC I made a bird called Odysseus (Cool name for Odie).

(In the flamethrower, those rubber bands are only to keep the dragon head from falling more often. They are not imperative.

(and yes, that is a custom large cape) 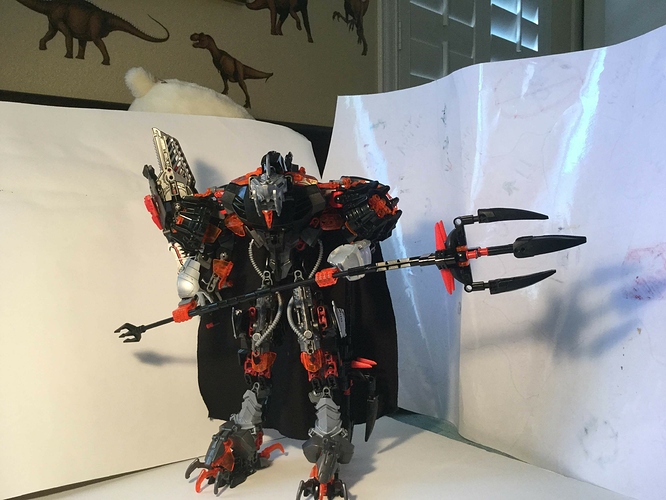 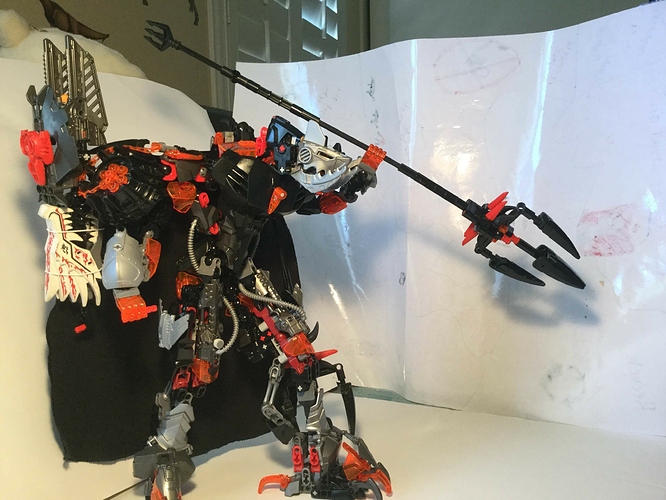 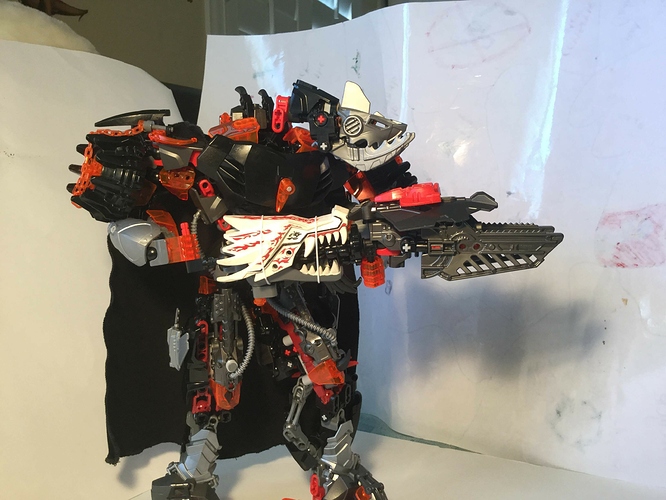 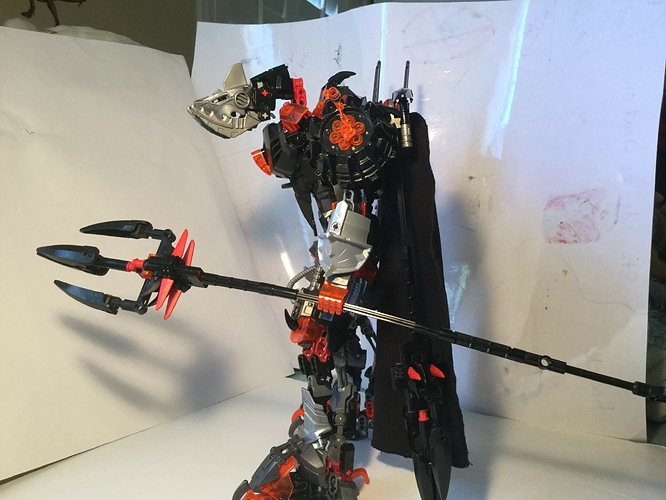 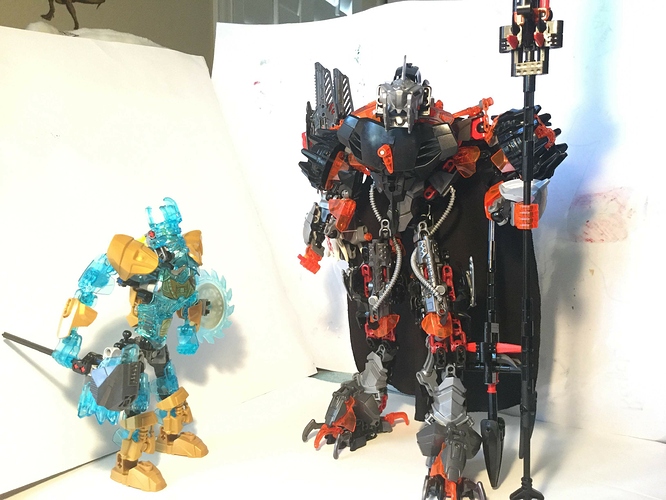 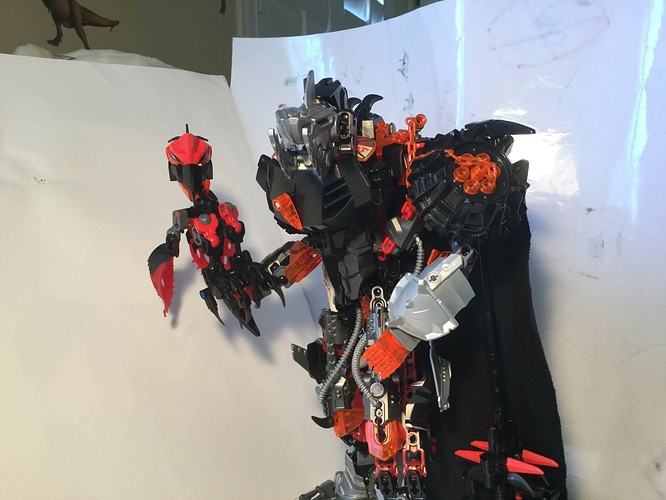 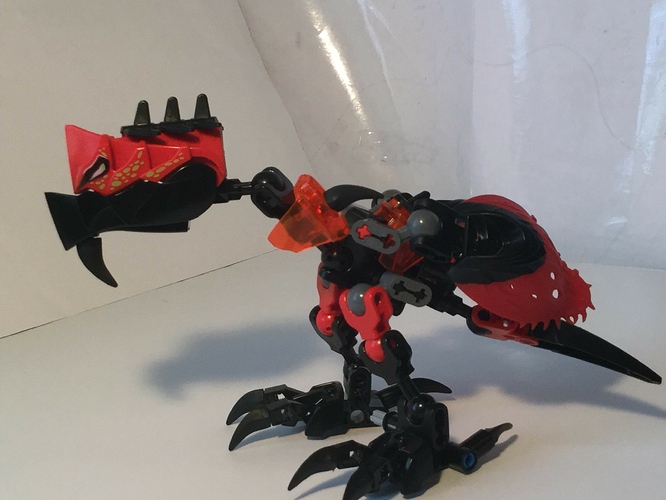 My MOC is ultimately on the side of good, but the black in its color scheme symbolizes its imperfections.

Story: Sharky Sparky was a general under the reign of Makuta, who was brainwashed into serving him. Makuta made him a cyborg so he could easily vanquish toa. He was a feared hunter traveling everywhere in pursuit of the them. When the toa banished Makuta, he was freed from the curse. Now on the side of good, Sharky Sparky works as the guardian of the mask of control and (when Ekimu isn’t there) the mask of creation.

Well this is a mess. But the bird’s good tho. Those arms and hands are unfit for that body.

I would agree that the tubes kind of make it look a little messy, and there is a lot going on. And about the arms and hands, in what way? Too big? Too small? Disproportionate? Doesn’t fit character? I’m curious to know.

he’s a mess, but good none the less(well that rhymed)…

STUPID AND SIMPLE IN DEPTH CHARACTER ANALYSIS ONLY BASED ON APPEARANCE TIME!

This character represents that sharks are the worst and we should start to actually do something about them or they will take over the world.

Yeah, it is messy, there is a large amount of stuff going on. I’d blame the tubes, and the back trident. Gotta admit I’d have to agree. I will probably change it to make it look more clean.

I made a toa sized version of him! 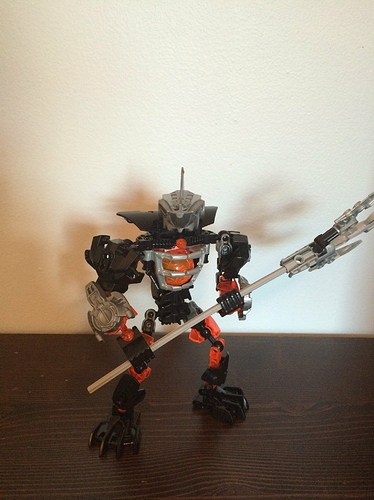 Wow! That’s awesome! What you did with the chest is especially creative!

This falls in line with all the edgy deviant art OCs out there.

Now, not to say it is a bad MOC…but pretty darn edgy.

“He lives on the edge of the edgiest edge, on an edge in that edge, covered in edgy spikes, and surrounded by clouds of edginess. His armor is covered in spikes, knives, and two huge speakers on his shoulders, blasting ‘I am… all of me’ on loop. He is so edgy, that he will kill you, even if he likes you. Because he doesn’t.”

To that I’d agree. There are many things going on. I’ll see what I can do about that.

I like it! The little dude he’s got is also pretty cute

I love this guy. First off he’s a shark man and ya’ll know that’s my thing. Also, j just dig his colors and overall look. He looks sick and I am exited to see future iterations.

Edgy and messy but like it it still on the side of good mocs, but seriously it is kinda messy but ithe looks pretty good

Well I’m back again, and I have made many revamps to my initial creation (the one you see here). Well now, I have pretty much fixed a few of the issues some people had with it. (Mainly the messiness). I will probably be posting the pictures this weekend but I’m not sure so don’t count on that.

and how did you get your hands on an expensive fabric, plush fur is £70 a meter

the bird just looks like a revamp of the tunnler beast

It actually shares very little with tunneller beast, other than the head and colours…