Almost forgot before the day ended. Oct 11th is the 10 year anniversary of Bionicle: Web of Shadows, the 3rd Bionicle movie.

We have recorded a coverage, and it’s up on Vessel for a week (for those with early access). For those that remembered, what did you guys think of the film? Lemme know below!

Never saw it. Granted I think I did when I was 8 or something and I thought Vakama was scary.

when I was younger I understood why vakama turned, honestly I still understand why he turned, so I don’t hate the movie like other people do

I think it was a good movie, but some bits were a bit off.
I just remember it being enjoyable to an extent, but it was too similar to SW3 for me

Maybe I’ll need to re-watch it

I think it’s pretty garbage for all the reasons outlined in the coverage.

That being said, Young-Nak really enjoyed it so I guess it did its job well.

Story was contrived at points, but characters were fleshed out despite many actions being out of character. By far some of the best action in any of the bionicle films, and the arguably the best villains we saw in the movies (since only going off the movies leaves Teridax as a boring villain). That being said, the movie really wasn’t that good. All the characters aside the toa and Roodaka felt underdeveloped (and this was the case with many of the toa as well) and despite the darker tone, many elements made no sense with the established characters. Overall I give this film a “average” rating. While not great, it has some good scenes and Roodaka is a cool villan for sure. But I wouldn’t go out of my way to re-watch it anytime soon.

And on a side note, the movie did a lousy job of explaining the timeline. I was so confused when I first saw it.

The film tried to be Star Wars too much.
It wasn’t that bad, but not that good either. 2005 was not that good year to me generally.

I haven’t seen the movie in a long while, but I do remember Keentongu’s baby face… I still have nightmares because of it.

The only of the trilogy imo that is still enjoyable is the second, so yeah.

While I did enjoy this film when I was younger, it has kinda aged in some aspects after watching it recently. My main issue was that a lot of the characters felt underdeveloped, particularly the Toa Hordika, as the film didn’t really go in depth with how they’d interact with their sudden changes. Not to mention we don’t even learn much about them through their struggles to face this new burden. I also felt that the characters developed to quickly at times, like Vakama who went from overconfident one scene, to hopeless the next, then enraged right after. The villains were fairly decent, having clear motives and some personality, though we really didn’t learn much about who they were and how they became the people they’d end up being.

Aside from the characters, I felt that the animation and effects had their golden moments 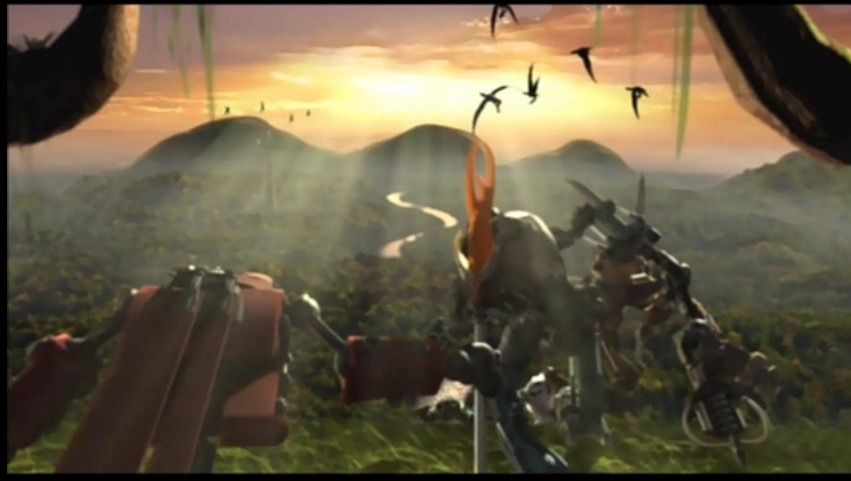 This particular scene looks beautiful, the lights, shadows, and grandiose scale really making it stand out.

Another aspect of this film that really outshines the previous two were the fight scenes, feeling a lot more climactic and well choreographed than ones prior. Plus we get to see all the characters abilities in full use, even the villains.

I forced my parents to buy our first DVD player so I could watch this movie. 8D Tbh, I’ve never liked it that much, but I look back on it fondly because of that.

you and I agree on a lot of things.

The arms! THE ARMS!

I remember watching it when I was young.
It was well…pretty bad.
I was hoping that Vakama becomes something like a lone wolf.
He believes that he doesn’t need help and thinks he can finish the job all by himself.

I’ve said it before.
Onewa. Should. Have. Turned. Evil.

I mean, it’s not a BAD film, but it certainly isn’t the best. The action was great alongside of some good characters and memorable scenes. (Like Keetongu killing Sidorak by smashing him.)

anyways I think web of shadows is the worst of the bionicle movies although 2005’s story didn’t help it. I find it to be boring at times and the pacing is a bit odd. It’s not all bad though the action is great and one moment I particularly like is when matua is climbing the tower trying to convince vakama to help the toa.
Edit woops I forgot about legend reborn when I said that web of shadows was the worst. It’s not. legend reborn was the worst.