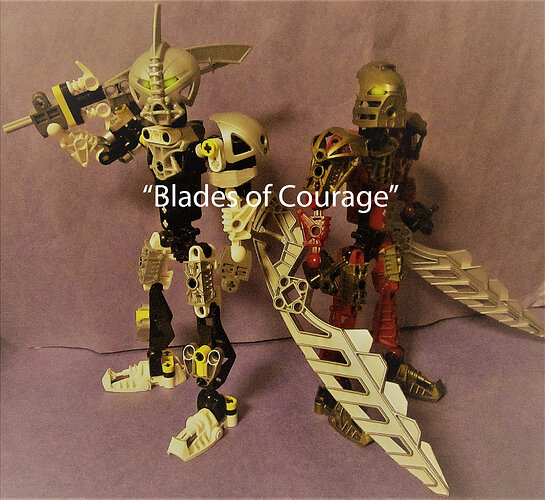 Lhikan smiled briefly underneath his mask at the sight of Seihu’s sword and put one of his Greatswords back to wield the other.

Seihu was nervous. When he sparred with Lhikan as a Matoran he used a practice sword instead of an actual sword.

Seihu reluctantly nodded and ran to Lhikan with his sword. He attempted to strike, but Lhikan swiftly and with little effort moved away and swatted Seihu’s sword away.
Seihu looked to where the sword fell, but Lhikan held the sharp end of his Greatsword to Seihu’s neck.
Seihu looked down at the sword with every part of his body stunned, except his eyes.
“You struck out of fear.” Lhikan reprimanded, “Fear has no place in a swordsman’s hands.”
Lhikan lowered his sword from Seihu’s face.
“Again.” Seihu did it again twice again, failing.

When Lhikan struck, Seihu used his sword mostly for defense. Until in one move, Seihu tried to strike, but Lhikan swiftly evaded, knocked Seihu’s sword away, and hit him with the flat side of his Greatsword.

Seihu was reclining on the ground when Lhikan looked at him and then pointed to Seihu’s sword.

“How do you expect to wield such a weapon when fearful hands barely hold it? Are these the same hands that courageously challenged that Rahkshi, and the same ones who held their own against Iswo and I during your training as a Matoran? The same hands were used to beat Gladiator? WHY HAS THAT CHANGED, SEIHU?”
“Toa Lhikan, I DON’T WANT TO KILL ANYBODY, especially with this weapon!” Seihu screamed. “I almost killed Hulgon once as a Matoran, and was set up because of Burosa and Sterok, I don’t want anything to do with a life where I would have to kill!”

Lhikan sighed and looked away.
Seihu looked up,
“Lhikan?”
“It is part of the Toa code not to kill, I agree with it wholeheartedly. But sadly, you can’t take that mindset with you all the time to battle.
The Toa tool chose you whether you liked it or not, but remember this Seihu, our duty as Toa isn’t to kill but to seek and bring out justice even when it may be scary.
Seihu, behind every swordsman, lies a courageous spirit that is extended by the sword.”

Lhikan walked back with Seihu’s sword and put it down in front of him.
” It is with this sword or any other weapon, you must cut away every fear you have and use it for Mata Nui’s justice.”

Seihu looks down at the sword contemplating and somewhat shaken, then he grips the sword with a newfound robustness and stands up

Breathing heavily, before screaming at the top of his lungs, Seihu scared away every fear he had.

Lhikan challenged him, “Come!”
Seihu charged with his sword and Lhikan ran towards Seihu with his greatswords. Seihu started taking the training seriously without hesitation while honoring Lhikan.

Seihu and Lhikan clashed swords for over 10 minutes. Seihu mastering his fear, combined effectively used both offense and defensive sword skills, while Lhikan fought like the seasoned veteran he was.

The sparring session ended with Seihu standing in front of the flat edge of one of Lhikan’s Greatswords and with the blade of his sword a little less than an inch from Lhikans neck, while Lhikan had one of his Greatswords inches close to Seihu’s upper chest.
Lhikan glanced down at Seihu’s blade and chuckled.
“I knew you could do it, Seihu. Well done.”
Seihu lowered his sword and stepped back feeling like he accomplished something. Not because he won or anything – it was a draw– but because he mastered his fear through the use of his sword, the Photo-Smiter. Lhikan and Seihu shook hands after their training.