Bo, Second of a group of nine Krana-wearing creations.

Whilst I had a few ideas in mind for a few Kranas, I had no idea what would fit Bo, other than a water setting. I also wanted to use a few of the rarer colours that the Krana come in, as I am a sucker for rare colours.

I chose to go with metal-blue, and as blue is reminiscent of water, to me, I eventually realised this would be a good opportunity to use Bo. Seeing how metal blue is used in only few different pieces, I added Pearl Gold. I think the two colours look nicely together, but do feel free to disagree.

I recently discovered how I could use Kraata as fingers, and as it turns out, probably by design, Kraata used in Rahkshi sets actually come in the same six colours that the Krana-Kal do! Only difference is that Kraata fade into another colour. This allowed me to give Bo, the creation, Kraata-fingers. Something I’m happy about.

Anywho, I forgot to reinforce the leg-foot connection, meaning the poor thing is extremely unstable, something I’ll have to fix later. I also removed the prints on Uniter Tahu’s chest, which worked out quite horribly. If anyone has any tips on removing prints, please do tell.

As usual, click on the pictures for their correct size & angle. 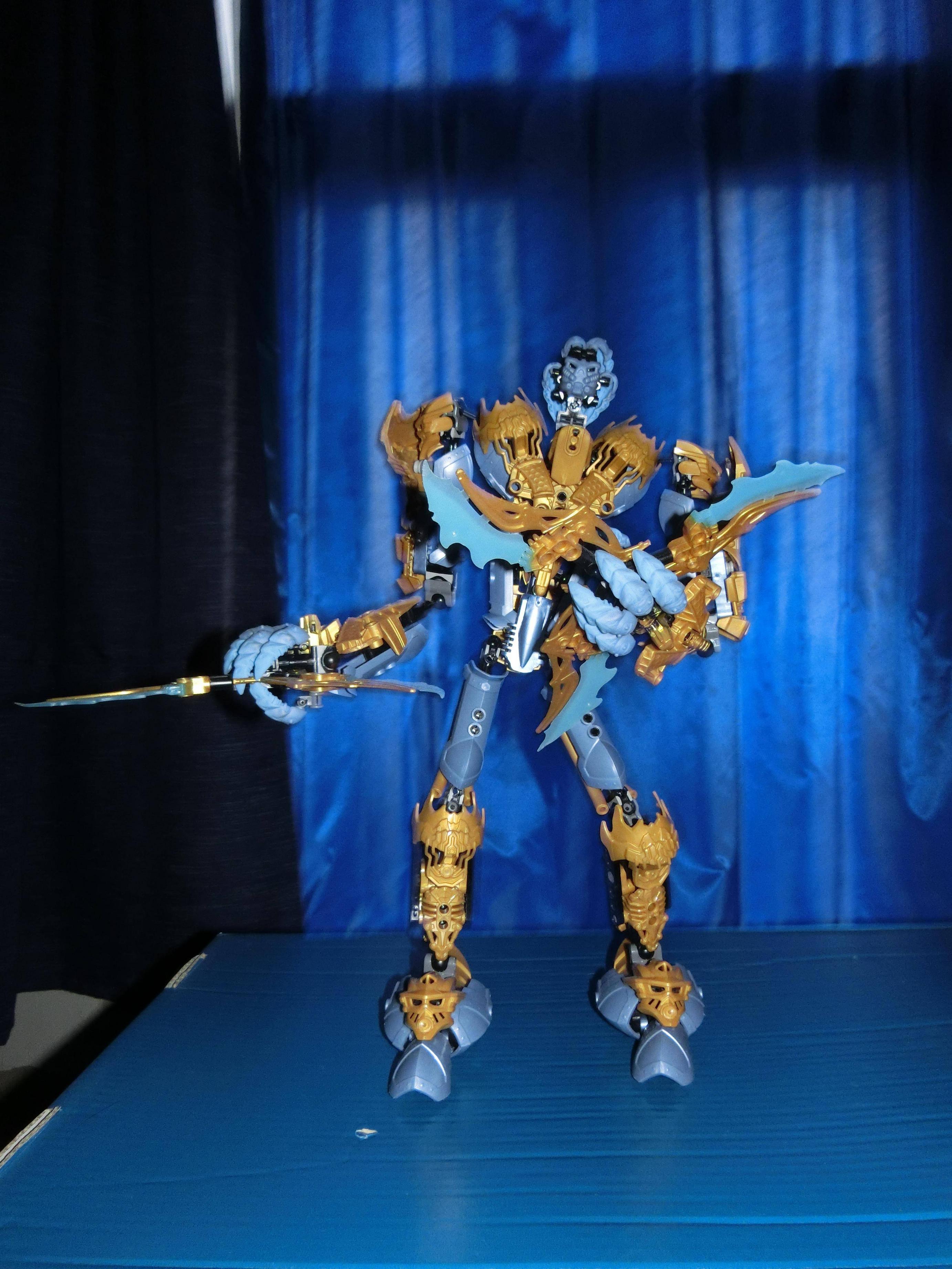 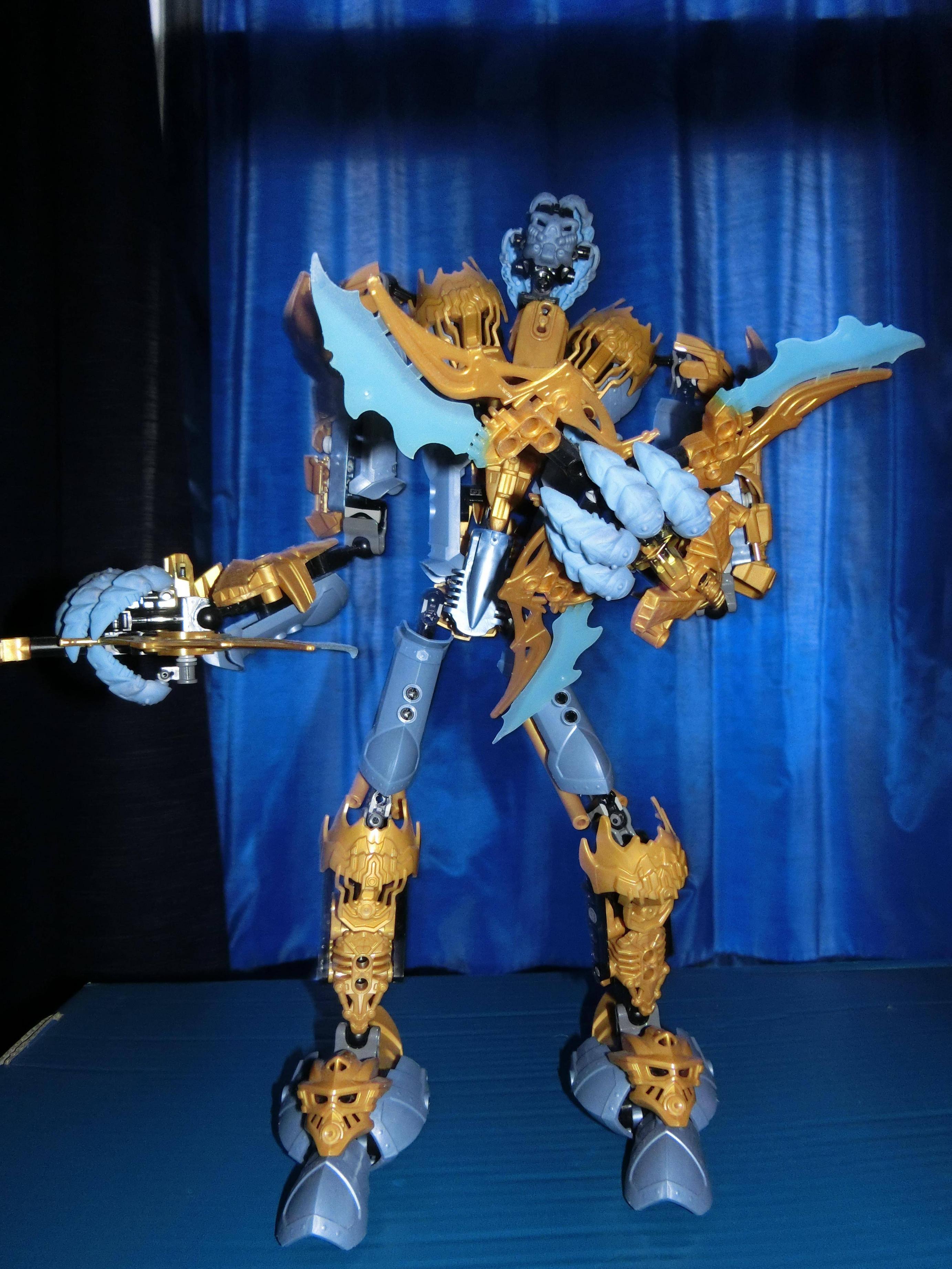 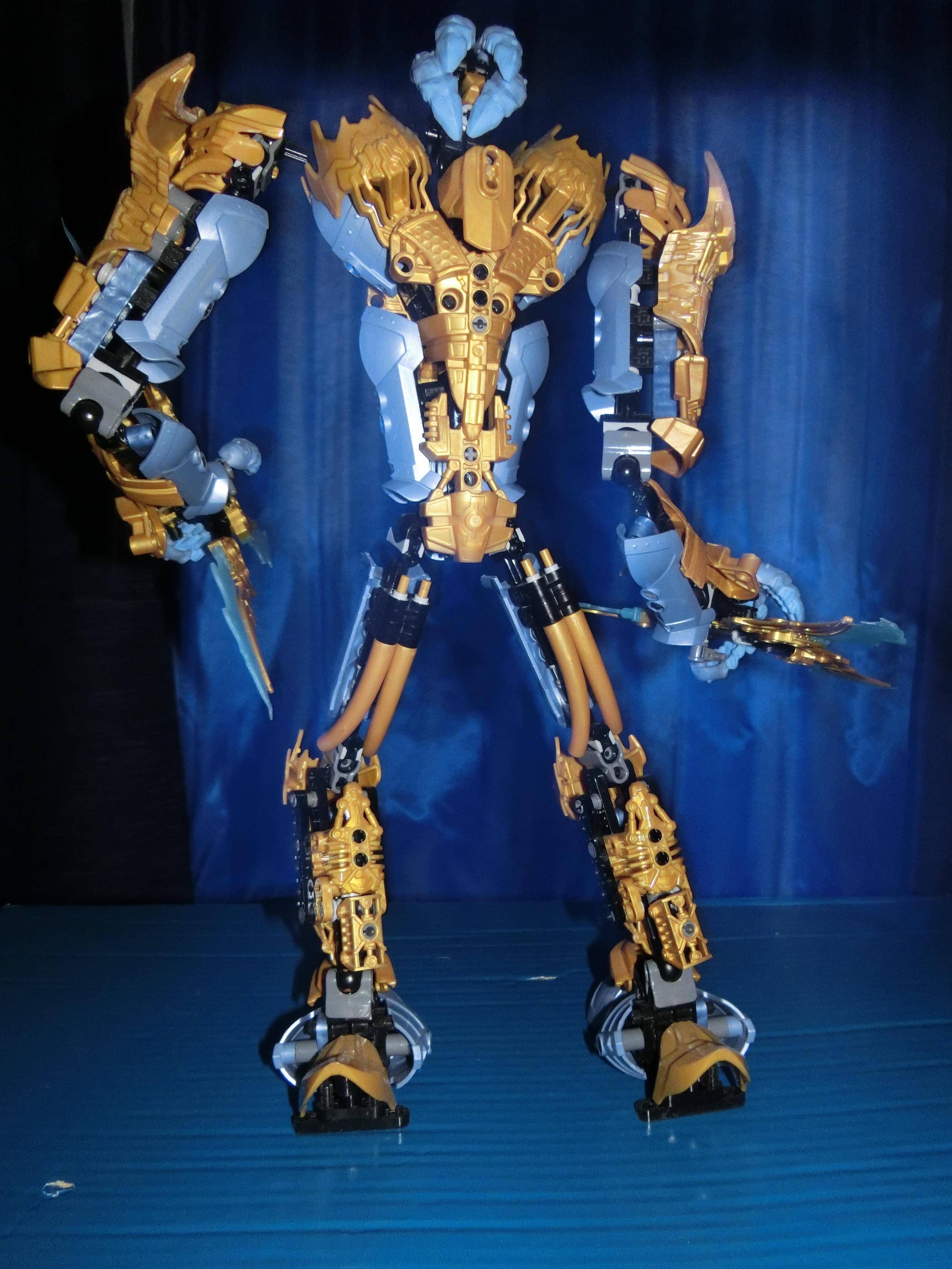 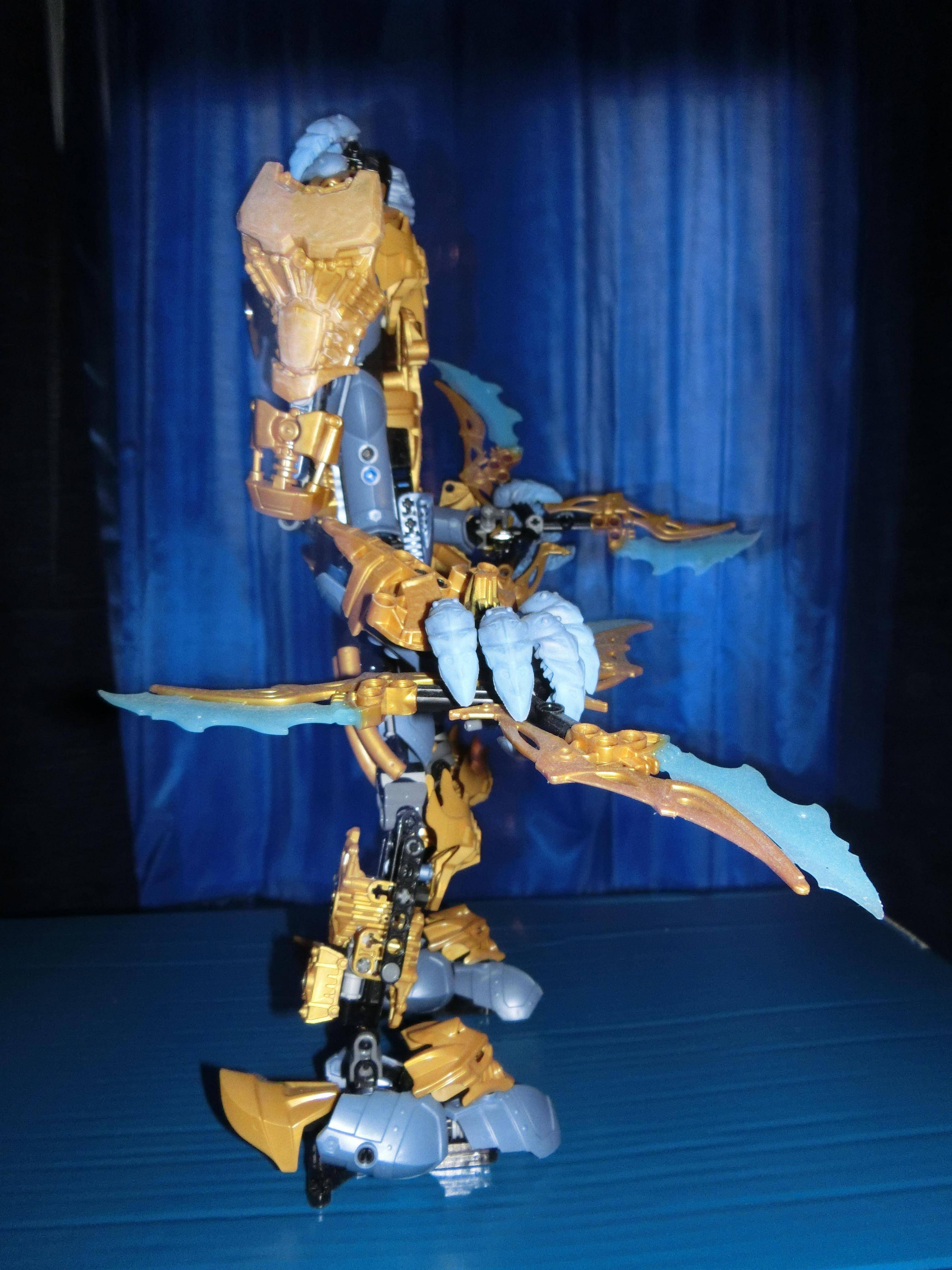 I have never seen Kraata hair before.

I have never seen Kraata hair before.

It works fine, though I think they work way better as fingerclaws.

That looks fiittng for a water-based character.

The thighs are way too thin for a guy this massive.

Do you mean as in it doesn’t fit looks-wise, or that it means he’ll be unstable?

Proprtion wise he looks awkward. The rest of his body has a good thickness but the thighs are too thin.

His legs are a bit skinny, but I love some of the parts usage (krataa fingers!)

The feet and neck are a little awkward. I would suggest restructuring both. The upper body and hands are good though.

This guy killed one too many Guurahks…

A very nice colour scheme, excellent layering, and texture consistency, but the build is decent at most. Nothing too bad, just some proportion tweaking and awkward points as mentioned by other users

Awesome. The ideea to build a team of Krana wearing-creatures is awesome. Please, can you do How To to them after you finish all of them?

So from what I can tell, most people advise for the thighs to be thicker and the neck to be… different. The feet will definitely need to be reworked as Bo is extremely unstable. I’m planning to connect pistons from the feet to the lower leg, like has been done to later titan sets of G1.

Thanks for all the feedback so far!

can you do How To to them after you finish all of them?

Honestly, I’d rather not take them apart aside for improvements. I did build them (to the extent possible) in LDD so if I find a way to upload .lxf files, I think I could just use that upload button at the top of the reply menu, maybe I could send you that.

Those hands look better than they probably should given the parts usage, and it’s a bit skinny,
But you made a complex build that doesn’t look cluttered, props.

Clicking on the following link will start the download of the .lxf file of Bo.

Alright, so because LDD is missing a TON of parts, I’ve replaced every part in this creation that is unknown to LDD by other pieces and gave those pieces the Bright Bluish Green colour, #107.

This means every Bright Bluish Green piece is actually a placeholder for a different piece. Now if you take a look at the pictures you might be able to figure out which piece corresponds to which, but if not, do tell.

Thank you very much! Hope you can send me LDD files from the rest too!

I’ll send you Ca as well. Especially the upper arm has many parts, the rahkshi shell and holder to name a few, that aren’t known to LDD. I’ve kept the torso and limb pieces separate.

Just ask if anything is unclear.

I am not open the from now.
Thanks very very much! Soon I will have a youtube channel. It’s OK if I will use this Mocs in some of my videos?

Sure, just mention my username. Also, if you have further questions perhaps it’s better if you send me a private message as this topic is becoming a private conversation now.