On the latest TTV Podcast, Exx sounded like he was having trouble coming up with ideas for how to bring the Toa Minifigure designs to life, so I did some part sourcing. While the torsos, legs, arms, and even the faces could be achieved using decals, the same can’t be said for the helmets. These designs seem to require new molds entirely. But Lego already has some pieces that, with some modification, would be the perfect fit for the Toa minifigs. 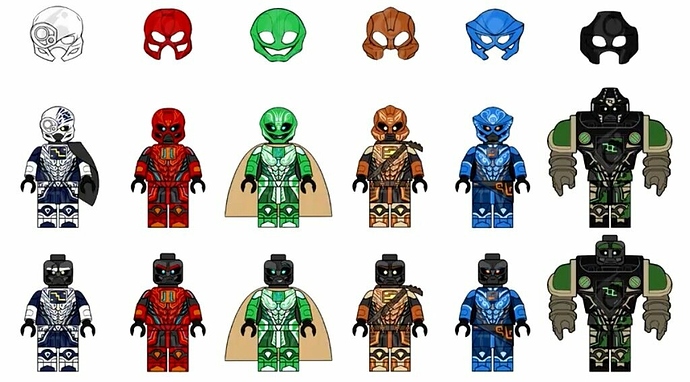 Unfortunately, I couldn’t find anything that resembles Kopaka’s helmet. His helmet would need to be a completely new mold. Tahu was also tricky. However, I was able to find a solution, though it’s a stretch. 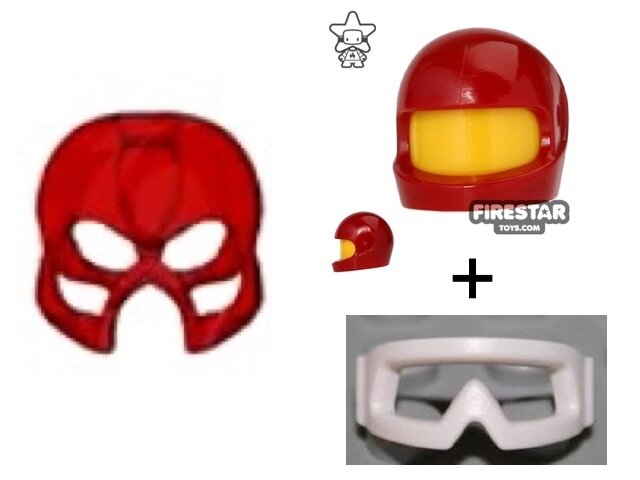 Painting a Star Wars Hoth visor and putting it on a basic red helmet would look fairly decent, although not ideal.
Lewa on the other hand wouldn’t need any new mold. Lego has a piece that looks nearly identical to the official helmet design. There is also a head that looks just like Lewa’s face design. 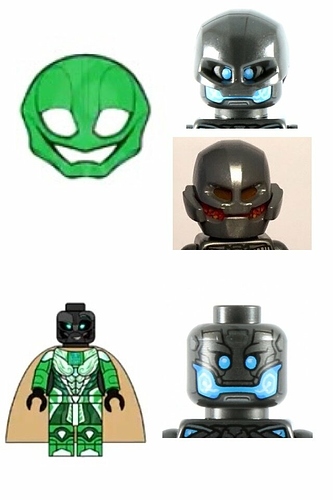 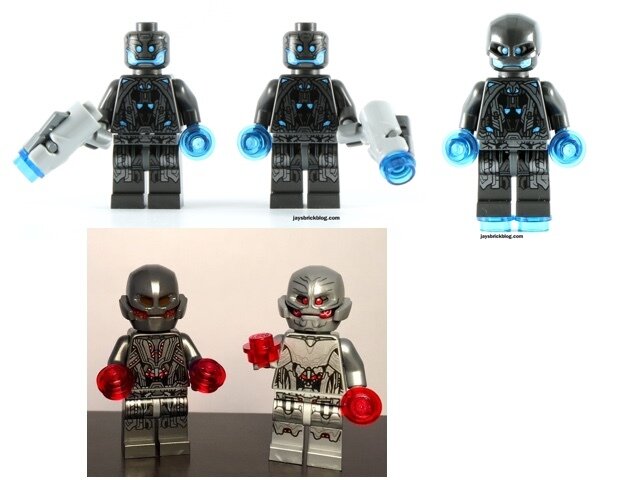 The Lego Marvel Ultron Guards have heads that are identical to the design. They even have the Miru smile! One of the guard figures has a helmet, (top right.) An Ultron figure has the same helmet, plus a bottom part that the guard doesn’t have. I can’t decide which better matches the Lewa figure; Helmet with Bottom, or Helmet without Bottom. Either way it looks great. It just needs a green paint job, no modifications necessary! Another option could be the Flash’s cowl, but that would require you to cut or sand off the lightning bolts.

Pohatu has a couple different options. They aren’t perfect, but they’re close. The major difference is these helmets lack the eye holes in favor of an open face. 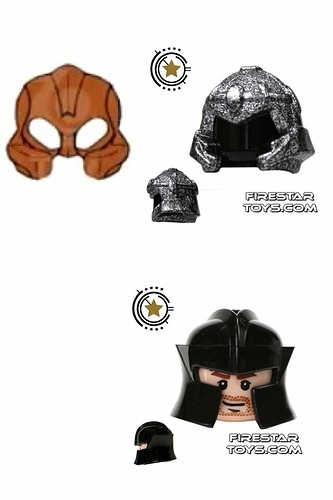 In particular, the Troll helmet (top) resembles Pohatu’s helmet. The Scorpion helmet is probably too curvy, but it’s still an option. Pohatu also has a shoulder guard. I flipped a satchel around and it looked a lot like the armor, (bottom.) The standard Lego shoulder armor piece works too after you’ve cut half of it off. Here’s an example on my custom Cloud minifigure:
(Click to see full picture.)

Gail’s helmet reminded me of the spider helmets from Chima. If you were to cut or shave off the teeth and paint the whole thing blue, one of these helmets would look great on a Gali minifig. 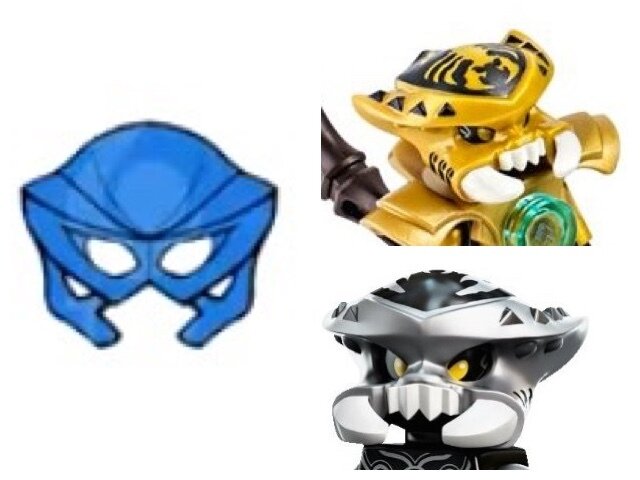 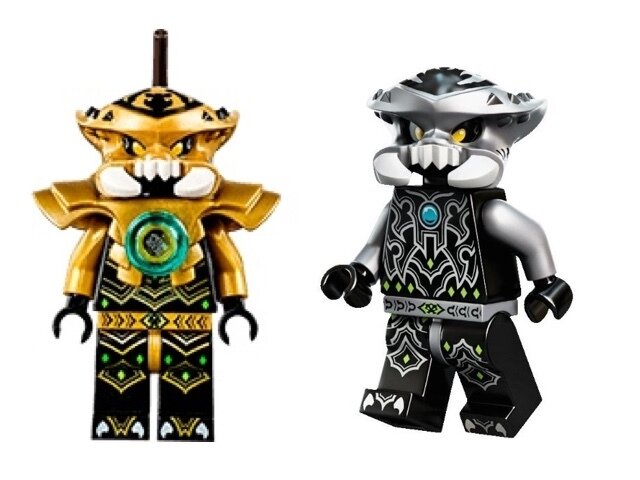 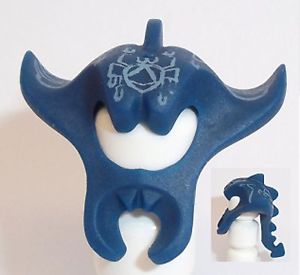 Finally, Onua. Lego doesn’t have anything that would fit him, but Brick Warriors does. Brick Warriors is a third party online business. They sell Lego compatible parts which are the same quality as real Lego. I have ordered parts from them in the past, and when thinking of ideas for these figures they came to mind. Brick Warriors has a “Tribal Mask” piece which looks close to Onua’s. It’s not perfect, but I think it would work.
(Click to see full picture.)

Chima also offers a head that resembles the Onua design. Gorzan, (from the gorilla tribe,) has a double-sided face which might look good on Onua. That’s just an idea though, it could easily be achieved using a decal or a custom print.

So those are my Toa Minifigure ideas. What do you guys think? If you have ideas of your own please share them, especially for Kopaka. I came up with these because it’s difficult to design and create new Lego molds, and to help out Exx with bringing these designs to life!

You know that Pohatu’s shoulder piece is already a piece, right? It’s from the Ninjago Skybound figures.
As a whole, I don’t like the idea of cutting pieces, but these parts you suggested could be alright substitutes.

But cutting pieces is heresy

I actually didn’t know that! I didn’t get any of the Skybound sets so I had no idea. Thank you for telling me. I made the Cloud minifig in 2014 so that piece wasn’t even around yet.

or we could just 3D print the custom parts we need, paint them, get the proper printing on them, and not have to cut anything

These are some good ideas. I really like Lewa, Onua, and pohatu. I may try to take a troll helmet and add a facemask, to see how that looks.[quote=“Leoxander, post:3, topic:35455, full:true”]
But cutting pieces is heresy
[/quote] Not if its done right

Another option for Pohatu is Bulk’s helmet from the Hero Factory Invasion from Below line. It might work well on him. 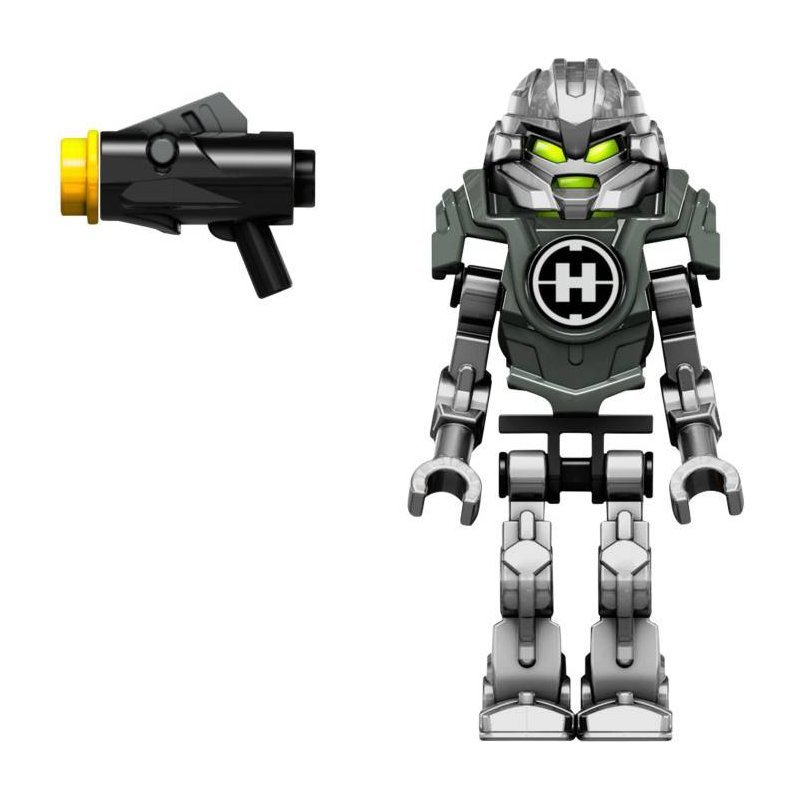 I just realized, the Nexo Knights helmets have hollow fins on the top. Those helmets could be used for Tahu instead of the standard helmet. 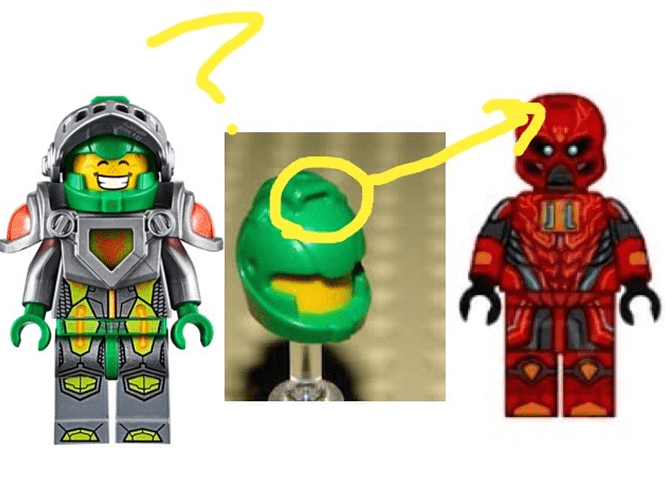 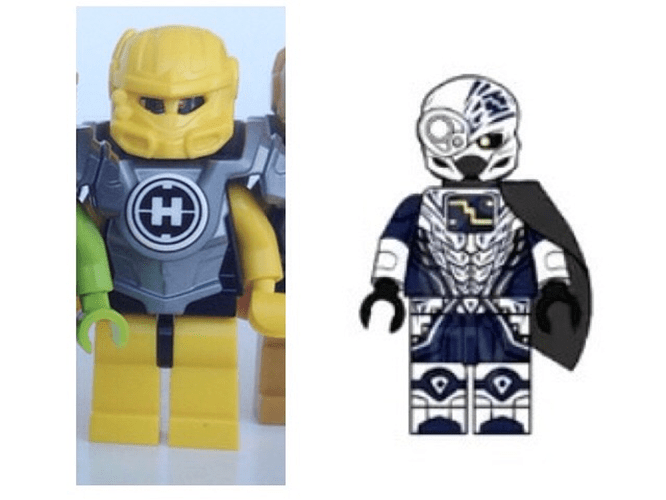 Just another thought for kopaka, the Lotr Rohan helmet could work, if the fin on the top was cut off and a scope was added. Also the gotg police guy’s helmet has some similar shapes.

Another idea for Lewa is the ant man helmet. It has many of the same shapes.

Bring out The green stuff.

Those masks are a little large on a minifigure though.

I guess you are right

It was a good idea though.

Yeah they look quite funny 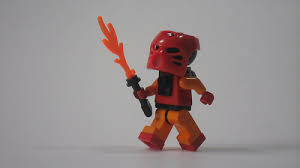 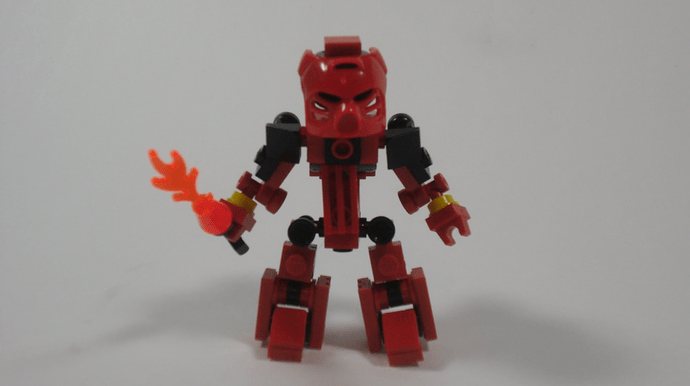 Try finding any of the parts to an 01 pen.