Canon Vs. Fanon: A Discussion

Today, we live in a world full of sequels, prequels, spinoffs, remakes, reboots, and goodness knows what else. There’s always the age-old question of “is this movie canon to that movie?” And the studios that make the movies are almost always able to answer that question by saying “Yes, this or that work is canon.”

But fans aren’t always satisfied with those answers.

The Star Wars fandom and the Harry Potter fandom leap readily to mind at this statement. Since Disney has ownership over the Star Wars property, they have officially declared the sequel trilogy as being 100% canon, as well as all the TV shows and spinoffs. But a lot of fans that disliked the sequel trilogy aren’t having it, saying that the sequels are a “disgrace to Star Wars” and that they shouldn’t be a part of the Star Wars universe. I’ve even heard a few people say that they don’t see the prequels as canon, since they apparently want the original trilogy and the original trilogy only to be canon.

And with Harry Potter, we find the case of the Cursed Child play. Despite critical acclaim, the play’s published script was widely panned by fans who said similar things: The Cursed Child didn’t do the characters right, it disrespected the lore, yada yada. J. K. Rowling openly declared that yes, The Cursed Child is canon, but she might as well have spoken to a brick wall. Harry Potter fans insist that the play isn’t canon. I even read one Amazon review where the reviewer was so angry at the book, they ripped their copy to shreds so that they wouldn’t be tempted to read it again.

So yeah. Even though the content creators, or the IP owners, technically have control over the canonicity of their works, their fans don’t always listen. Of course, there are some people (like myself) who do indeed accept that the Star Wars sequel trilogy and Harry Potter And The Cursed Child are canon. Perhaps part of it is because I actually really enjoyed those works, but the fact is still the same: I am in a minority.

But there is another case where the situation is…different? The case I’m referring to is with the live-action Transformers movies, specifically Bumblebee. For those of you who don’t know, Bumblebee was announced and developed as a prequel to the Michael Bay movies, and for a long time, that’s what it was marketed as. But then Hasbro and Paramount started to drop hints that it could actually be a reboot, and when the movie actually came out, it was a sort of half prequel-half reboot; a preboot, if you will. Then, some time after the movie came out, Hasbro said that Bumblebee was part of a new series of Transformers stories. A lot of people were overjoyed that Bumblebee was a “reboot,” because they’d wanted a Transformers movie reboot for quite some time. But the thing is, Hasbro and Paramount didn’t actually use the term “reboot.” If I recall correctly, their wording was “new storytelling universe,” which could mean a lot of things. It could mean a full-on reboot with no connection to the previous movies, it could mean an X-Men: First Class kind of deal, or it could be an extension of the universe that the previous movies established. Whatever the case, Hasbro has always been pretty open-ended with what they said about Bumblebee. And when a deal-maker leaves things open to interpretation, it’s entirely possible for people to read it in a more beneficial way that what will actually happen.

To be fair, the many Transformers fans that interpreted Hasbro’s announcement to mean that Bumblebee was a reboot weren’t 100% wrong. If the rumors are anything to go by, the Transformers movies in development will ignore the events of the first five movies that supposedly take place after Bumblebee.

But that kind of ties into my thesis: it’s that fandoms conform the canonicity of movies, books, games, and TV shows to what they want to be canon. Deep down, they don’t care what the “higher ups” say-they choose what they want to see as canon. It can be argued that that’s hypocritical-people will accept the studio’s statements that this work is canon, but they’ll disregard the studio’s statement that this other work is canon-but really, there’s nothing fundamentally wrong with having a “headcanon.” Like, you can have your own personal interpretation of how this or that movie connects with another movie. And if that helps you enjoy the movies you want to enjoy, well…then good on you.

That’s all I have to say.

Love is not canon. But it is only my opinion.
Every one has his or her own headcanon I do not accept that Helryx’s build.
But, if talking about headcanon forming process: I think that something is needed to be added to/removed from when

Tose are my thoughts.

Honestly; headcanons are super important. I don’t understand how people can just take Greg or whoever else’s word as gospel and never question how it could be better, even if it’s just ignoring that they said it.

(onto the part no-one asked for, feel free to not read any of this you won’t be missing out on anything

That’s all I have to say. 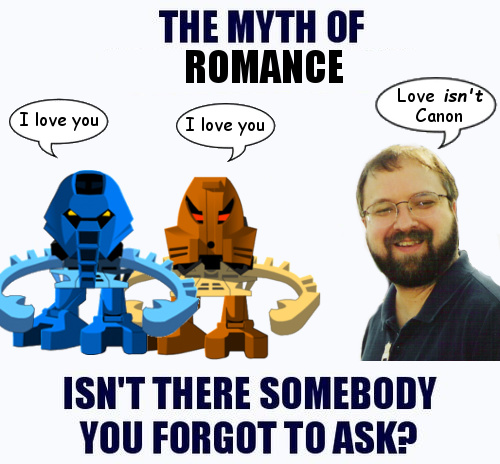 When it comes to canon discussions, what we are dealing with can be seen as authorial intent vs death of the author.

Back in the day, canon in works of fiction didn’t really matter. Watch a lot of classic Universal horror movies and most of them contradict each other, even the immediate sequels. The word “canon” wasn’t applied to fictional continuities until Sherlock Holmes came around, and even then it was an ironic term. I mean, who is going to care about the life of a made-up detective?

When discussing a work, authorial intent should be considered, since it is why and how a fictional world operates. When it comes to enjoyment of works, however, I feel people put too much stock in canon. Fans often view “non-canon” as synonymous with “worthless”. I disagree.

When the new Star Wars series came out, the old expanded universe was abandoned. This upset a lot of fans because they felt it rendered some of their favorite stories invalid. But guess what? They still exist. You can still enjoy them. I love the Thrawn trilogy and the Knights of the Old Republic games. They’re still great stories, being non-canon doesn’t erase that.

Or, take romance in BIONICLE. Love isn’t canon. It’s been that way for years, and that isn’t going to change. However, that wasn’t always set in stone, or at least not all writers got the memo. Whatever the case, romance got spilled in our franchise. Greg has the final say on G1 canon, but nothing he says should take away your personal enjoyment of non-canon things.

It contradicts with another part of canon

Did it contradict something else in canon? I’ve heard people say it was dumb because no one had done it before (in my own headcanon, it has been done before on occasion but this is the first time we see it), but I’ve never heard the argument that it directly contradicts something.

Well, I am actually not that good in Star Wars. But hey if that thing always was here, then why, WHY, wouldn’t they used iy on the death star?! And also wasn’t that huge cruiser having an outopilot to guide it, not a living human?! But I think it is a bit off subject. More close thing: Disney made Star Wars much worse then they were made before, so it is a good rason to exclude it from headcanon. And if you are enough big fan, you’ll probably find some contradictions.

WHY, wouldn’t they used iy on the death star?!

But hey if that thing always was here, then why, WHY, wouldn’t they used iy on the death star?

Because the Death Star was WAY bigger than the Star Destroyer, and it had to be destroyed by shooting a proton torpedo into that one exhaust port. If Holdo did that manuever on the Death Star, it would definitely cause damage to its exterior, but the main reactor? It’s a possibility, but not a 100% guarantee.

All they would’ve had to of done is take out the main weapon. Also consider that Holdo went through Snoke’s ship. We really don’t know how dangerous hyper space ramming is.

+if I recall correctly she desroyed all the Star Destroyers at once. Also, there is 1 more undeniable argument: they could have used it from the start! And 8th episode would have never happened! And the first Order too could have sacrificed 1 Star Destroyer and boom! All in all, such a concept destroys (and contradicts with) the whole “space battle” thing, so if something should not be added to the head canon - it is that scene. Am I too off topic? Stop me if so :).

You’re right. Let’s trust The BIONICLE Wiki on this one. 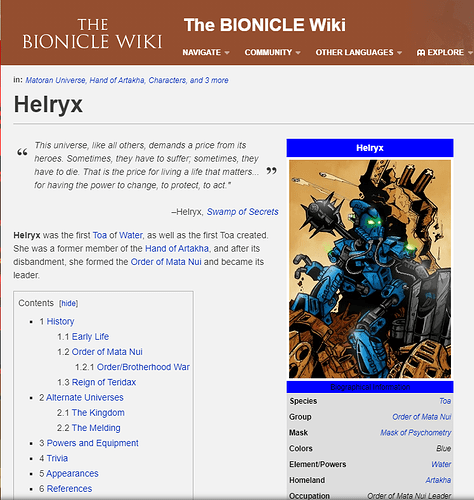 ok but uhh the bionicle wiki is not real

Why not? BS01 is most accurate source of Bionicle info. If it says it is canon, then it is canon (at least an official one). I personnaly do like the Helryx contest outcome.

I hope the rest of the canonization contests turn out as good as this one.

that’s cool and i have no problem with that

it just isn’t canon, and i don’t need to specify that it’s not canon to me just because gref sent an email that’s only two words long

It’s fine if you don’t like it, but saying it’s not canon is a bit silly. Greg approved it, he’s the only LEGO employee that’s still invested in G1’s story, so it’s canon. (though whether or not he even looked at it, I don’t know)

Look at Star Wars, for example. There have been a lot of dumb additions and retcons over the years. coughmidichlorianscough I don’t like them. I can choose to ignore them, but they’re still canon.