So we should probably talk about these… 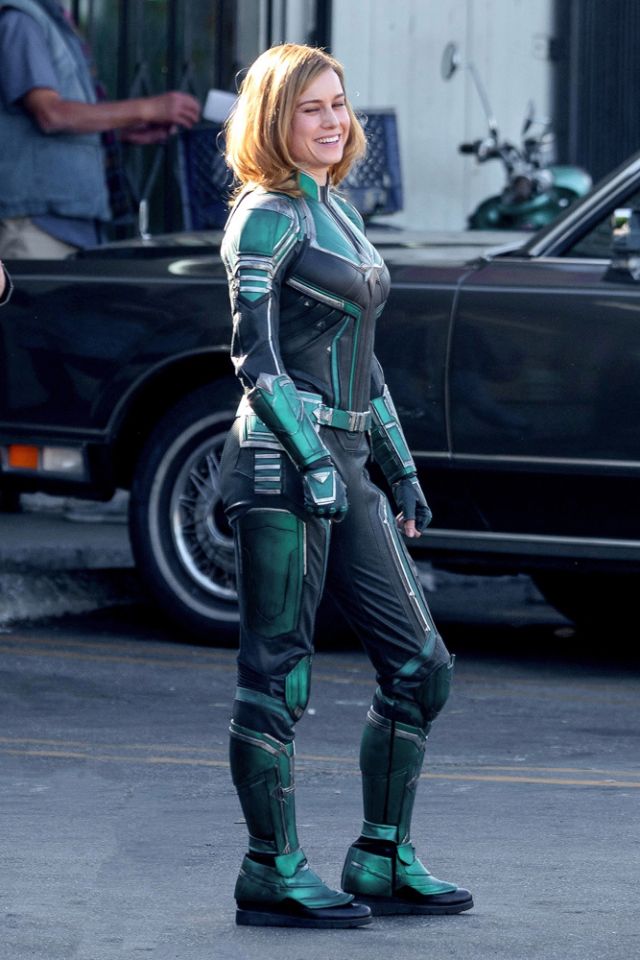 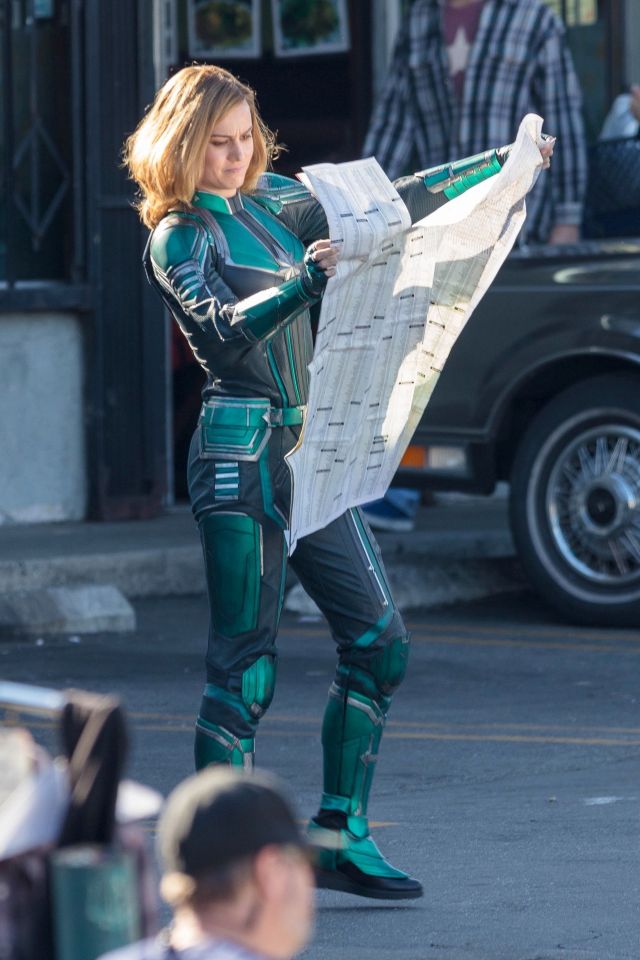 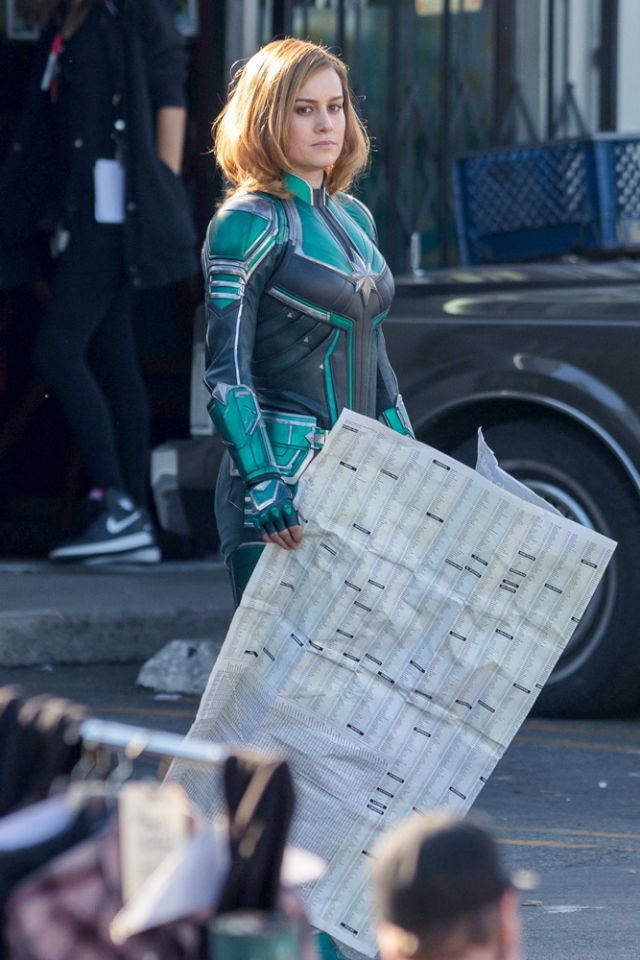 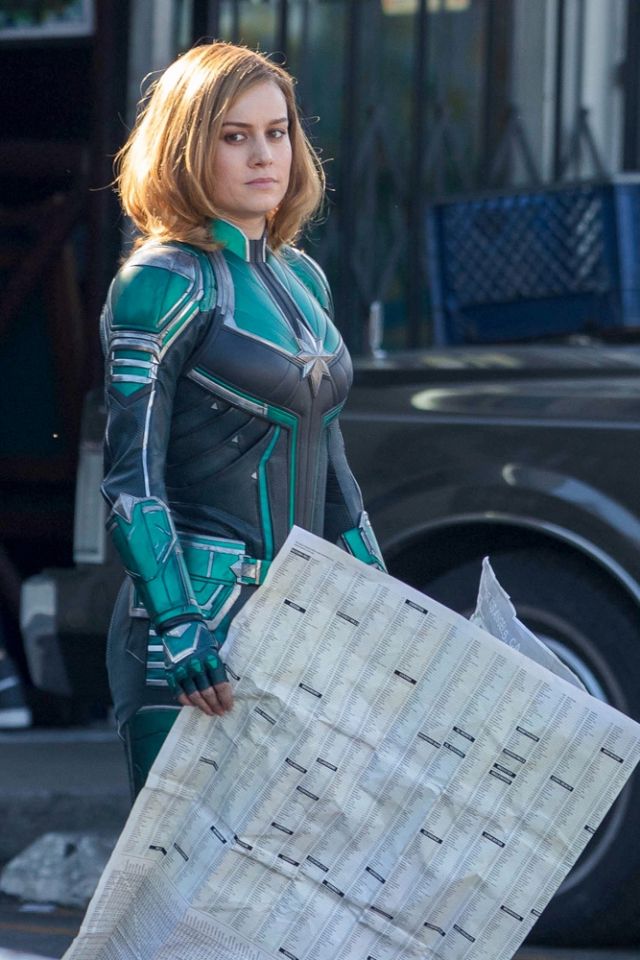 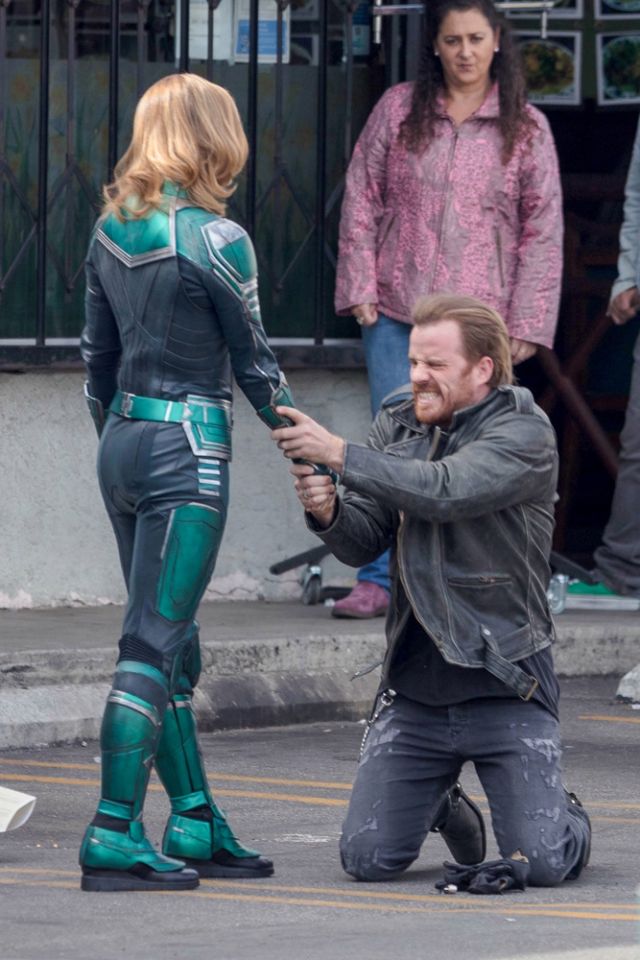 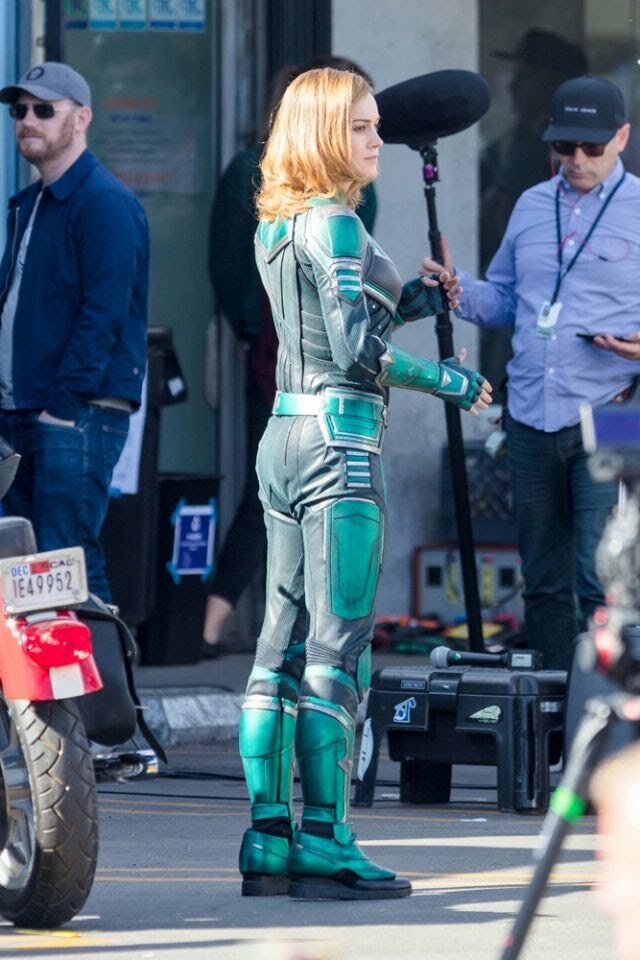 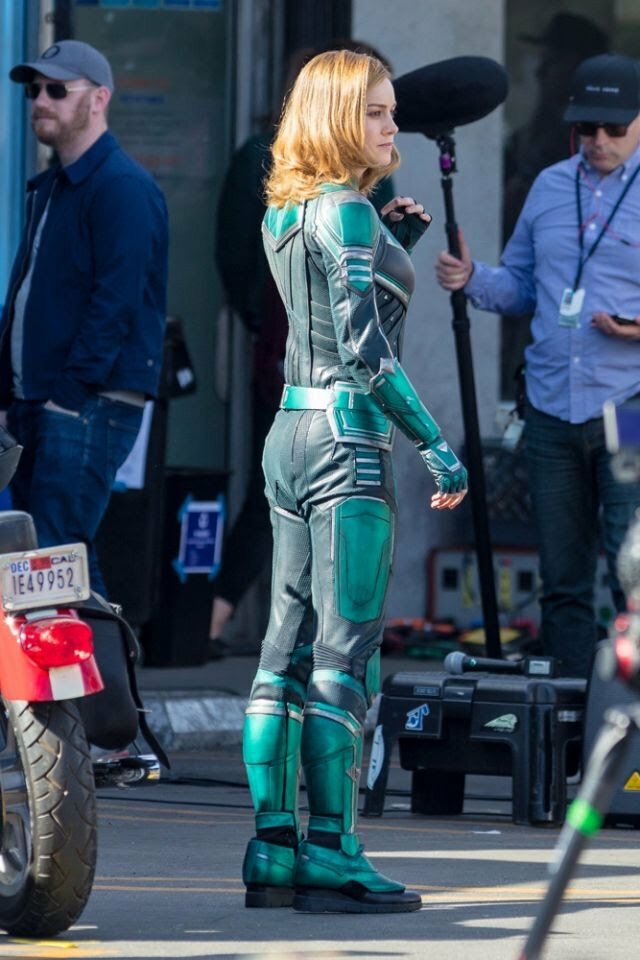 Like this’ll be the one she gets when she starts fighting with the kree, and the she’ll move on to her red and blue one.

I hope she doesn’t. That emerald green looks amazing! 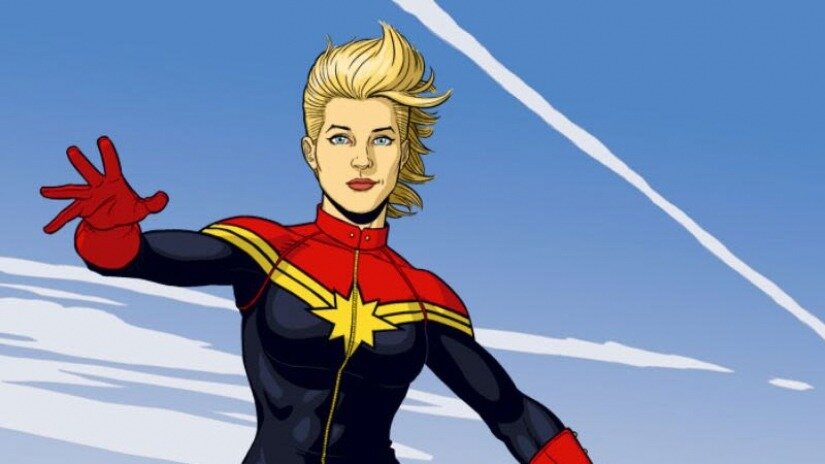 We do have more pictures of captain marvel 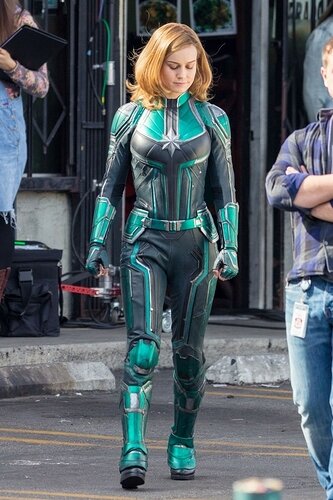 I think it’s too generic, nothing really stands out, like I said, the hip cloth piece would make it look better

let me photoshop something real quick 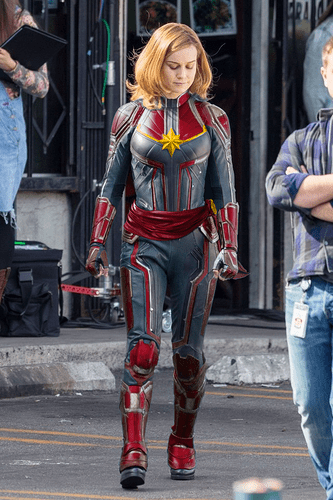 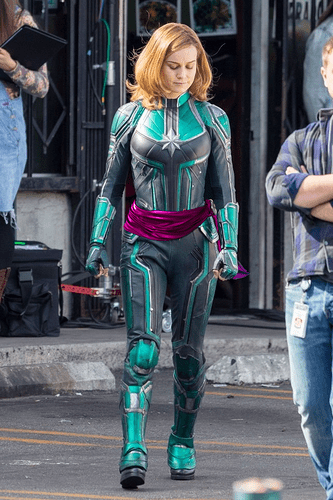 I love purple, but that pinkish violet color does not work IMO.

the hip cloth piece would make it look better

I do agree with you on that. but I think the tried to do it halfway with the belt 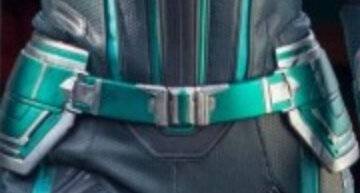 They’ll probably get to it eventually. Because every characters costume changes by the movie.

Am I the only one that thinks people are getting way to angry over a few behind the scenes photos? I think we should wait till an official picture or trailer before we make our our minds on this. Marvel have a pretty good track record when it comes to costumes. They’ve really only made one or two that I straight up haven’t liked.

I actually don’t mind the hip cloth being gone. Looks better without it.

Carol is in the movie so you never know

They’ll probably work their way towards the shorter hair for captain marvel, but remember: this is in the nineties, and in those pictures that’s a very nineties haircut.

Edit:
https://m.youtube.com/watch?v=pVxOVlm_lE8
So this came out… it’s pretty cool.

Anyone else think that she’s taken Mar Vell’s suit in those pictures?

We’ve seen concept art of her in the red and blue suit so we’re definitely getting it. 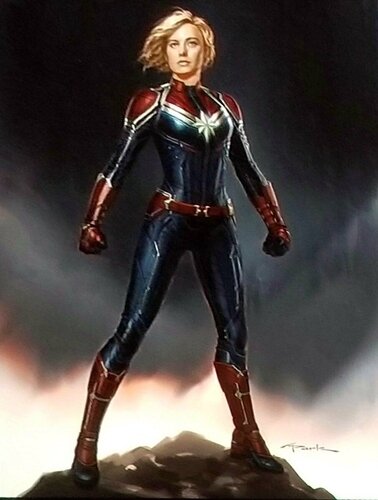 yeah that was actually an error, I made a couple of versions and copied the wrong one

I tried giving her the complementary color of that emerald green 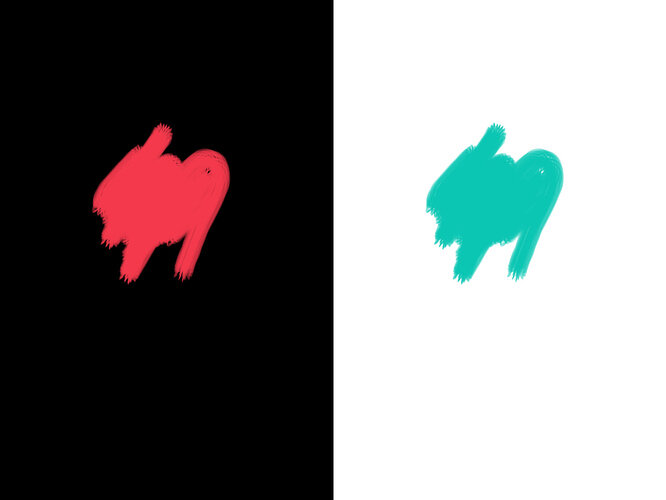 what color would you think would look better? 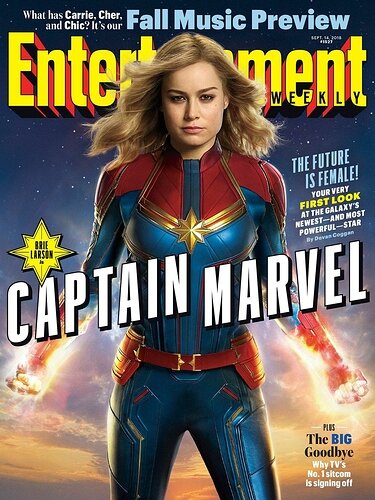 I really want it to be good, but I’m so worried they’re going to focus gender politics over a good story. Don’t get me wrong, politics don’t always hurt a film, but when they are more important than story and characters, that’s when I have a problem. Also, I hope they don’t base Captain Marvel’s character off of the new one, I’m not a huge fan or the new Captain Marvel, hopefully they base her off a more Mrs. Marvel personality.
At least we’ll have Fury and Colson to carry the film if it goes bad.

What’s the difference in personality?

There’s an article that talks about her struggling with being human and Kree, her Kree side being an emotionless warrior and her human side getting in the way of that, if that helps at all.

Well, I don’t like the new Captain Marvel. She always came across as very antagonistic, and almost masculine (or maybe that’s the hair). I want her to be more friendly like she was a Mrs. Marvel. Thats just my opinion. Also, that new backstory sounds like some good character motivation. But it looks like they’re already marketing it off of politics due to the “Future is Female” quote, oh boy.