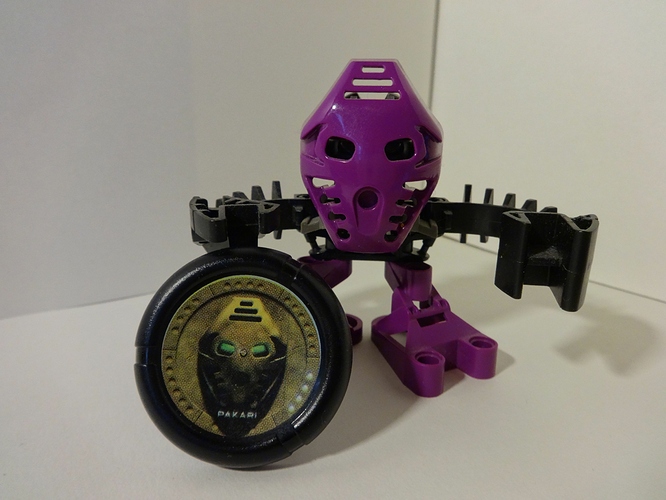 Onepu is an Onu-Matoran from Bionicle G1 who was the captain of the ussalry, Whenua’s aid, and a kolhii player.

Minor note: This set was distributed for free at McDonald’s with the purchase of a happy meal when it released.

So I got this guy back in 2014 because I didn’t get him back when these were at McDonalds (all I got was Hewkii and Kongu). This one, along with Macku (who I also bought later on), stuck out to me and I had to get them. But enough backstory, let’s get into this review.

Obviously these are all going to be my opinions.

Pros:
- The color scheme is perfect. This is one of the few sets where you can say the color scheme is perfect. The only colors you see here are Black, purple, and dark grey.
- The functions. This set has two functions. One of them is a disc throwing arm where you put the disc in the fork like hand, pull it back a little, and let the disc fly. It’s a pretty cool function, just be careful you don’t lose the disc. Also the disc can be stored on his back thanks to a little addition on the back of the head (I didn’t know about that until I watched ElJay’s review of the McToran…yup).
- It’s small and compact. This helps the set a lot. The set is sturdy because of all the pin connections, it makes for easy storage, it helps sell that these guys are weaker than the toa, and it makes them look adorable.
- Awesome re-colors. This set comes with a purple Pakari… Simply amazing.
- It was free when it was released. Yeah, you had to buy a happy meal at McDonald’s, but you were paying for the meal, not the toy.
- This can be combined with the others to form combiners. The Matoran Kaita and the Matoran Nui look cool in the art and I have managed to build a matoran Kaita. Definitely a pro. And they are easy to build.

Cons:
- Little articulation. Due to the small size of the set, it doesn’t have much articulation. The arms can move back and forth a little and the legs can spin around in their sockets. Also the head cannot move.
- These were hard to get. You had to go to McDonald’s and buy a happy meal to get these guys. And even then it was random which one you would get. And don’t even get me started on how un-healthy McDonald’s food is. I know this isn’t relevant anymore, but it’s still worth a mention.
- The eyes could have been colored. Seriously Lego? You couldn’t color the eyes so at least they would look somewhat normal?
- It’s easy to lose this little guy. While I praised the set for it size, it also works against it. if you’re like me, you most likely took your matoran a part and lost the pieces over the years. Also it is very easy to lose the disc.
- The disc could fall off of the head. Yeah, the storage system on the head is not perfect.

Do I recommend this set? Yes. It is a great retro set to own and you probably won’t be losing it if you can go online and order it all by yourself. Plus these are cool to have around. And the re-colors…that too.

And even then it was random which one you would get

Can’t you ask for which ones you want? I did that all the time when I had Happy Meals

Hmmm… you probably could, but I don’t know how each McDonald’s employee would react. While yours where nice, others may not have been.

The McToran were pretty neat, collectible little figures, Onepu being one of my favorites alongside Kongu and Hewkii. If I have the money I might consider buying a couple.

Gotta love the purple on this guy. Also worth noting is McDonalds distributed free “mini comics” when they were running this promotion. Basically in the comic all six Tohunga would combine to fight off a Nui Jaga that was terrorizing a village. Pretty cool huh?

These were hard to get