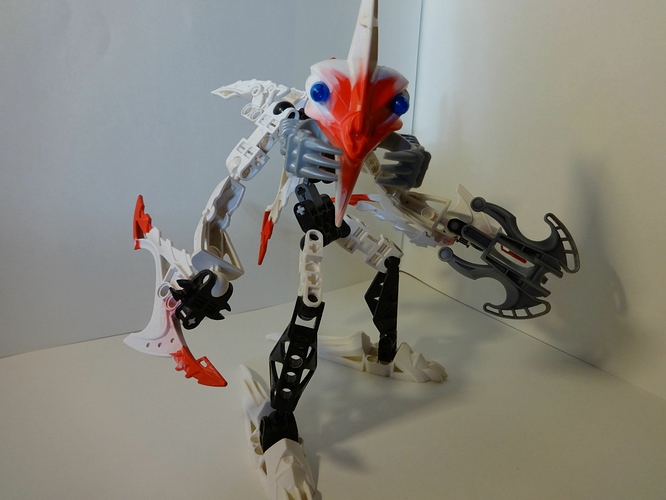 Pridak is one of the six Baraki warlords trapped in the pit. Once one of the leaders of the six kingdoms, he now stalks the pillars of salt and leads the Takea sharks.

I might as well stop making a complete fool of myself at the TTV live streams and do something productive. I’ve had this review planned back when I posted my reviews for Onepu and Orkahm, but I never got around to this guy. So basically in between my Orkahm and Solek reviews.

And yes, he is one of my favorite sets. A little bit ago I was able to rebuild him and it was awesome…but I couldn’t find the squid ammo…

Obviously these are going to be my opinions.

Pros:
- Pridak is menacing. My gosh this set looks menacing. It’s all the points and blades on this set. I would not want to run into Pridak alone in the ocean. Plus the red accents add on to this.
- The build is sublime. I love how Pridak has a custom torso. Originality and creativity is always welcome in Bionicle sets.
- Melded parts. This set comes with melded parts. The larger blades and head are white melded with red. It really adds on to that menacing look I mentioned earlier.
- His color scheme is perfect. This set is like Onepu, their color schemes are perfect. Pridak sticks to three colors: Red, white, and black. These are balanced nicely in the set. Also his eyes are perfect too. The blue eyes contrast with the red which allows you to see them excellently. And I can absolutely forgive the grey and silver pieces. They do not distract me from the main color scheme. Heck, even the red axles fit in with this set!
- The weapons fit perfectly. Seriously, the weapons look shark themed which is obviously what Pridak is based off of. This is also evident with the blade on his back. It fits in nicely as a dorsal fin.
- Articulation out the wazoo! The custom build really helps this set with articulation. This set can pull off so many poses. This is an amazing thing to see.
- New parts! We get Pridak’s head, the Baraki teeth, the shark blades, the marhitoran blades, Squid ammo, and the squid launcher. Some of the parts are even re-colors!
- Ammo storage for the win! Yes, we get ammo storage on the non launcher hand. Always lovely to see.

Cons:
- This set can flop around. Yeah, the custom torso build can work against the set too. I feel sorry for the person that gets the Pridak the lacks friction. Also you can easily knock this set and make him bend over.
- The blades make things a little messy. All the blades can get in your way or the sets way. It was bound to happen with the build the set has.
- The feet are too long. I feel the feet are way too long. They might make posing a little difficult and they make no sense if you were to walk with them. But I suppose they were meant for swimming given the theme and lore of the set. But! this is still a con.
- The squid launcher is janky. Yeah… the squid launcher barely works. You’re supposed to use your fingers to hold the launcher and pull back the squid to launch. I could never get this working as a kid.
- Some of the new parts have limited MOCing potential. Yeah, specialized heads have never gone down well in Bionicle. Also the melded parts limit themselves to color schemes that use red and white. And the squid launcher…do I need to say more?

Would I recommend this set?..what do you think the answer is? Of course I would! Yeah this set has cons, but they are minor in my opinion. But they still may irritate a casual Bionicle fan. Be ready if you decide to get this set if you are not used to complex sets.

Nice review! I myself really like Pridak and feel Lego did a great job at designing him.

Agreed. Besides Takadox of course.