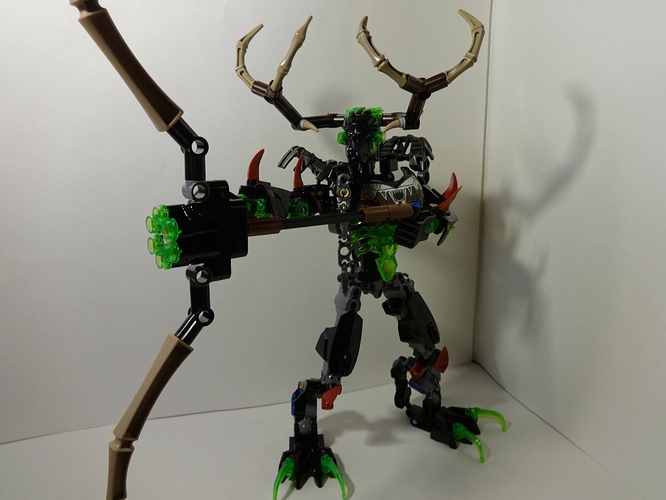 Holy Makuta, Lego must have been firing on all cylinders when they conceptualized this set. I just got this today and I am in love with this set. But enough of my rambling, let’s get into the pros and cons.

Obviously these are all going to be my opinions.

Pros:
- Umarak looks like a hunter. I think it is safe to say that Lego nailed the hunter look for Umarak. The spikes, the horns, the rib cage, the beast-style armor printing, the color scheme, the weapons, his armor, and the accessories all give off a seasoned hunter vibe. His bow is also a nice touch. Compared to Skull Warrior’s and Vizuna’s bows, it absolutely looks like a hunter’s bow (not to say it doesn’t already look like one). Also having a hook sword on the side of his leg is another amazing touch. It resembles a hunters knife which a hunter should have.
- The color scheme is 99.5% perfect. Umarak’s color scheme is amazing. Nearly everything is balanced in this set. I feel Lego knew what they wanted and made sure it was balanced enough to the best of their ability. But I will say there are some areas that are little problematic. The horns really only have that color there and there are blue pins and red axels, but will get back to that soon.
- The build. Umarak uses a combination of the Uniter build and the Skull Villain build as you saw in the photo. This, in my opinion, sells that Umarak is on the same side as the skulls from 2015. Also I like how the leg build is different the Uniters. It helps show that Umarak is different. Also the horns are nice. They make him look intimidating from a distance. And on a finishing note, jumping back to the legs, they kind of remind me of the Skull Grinder combiner from 2015.
- Re-colors that are awesome. You’ll have to forgive me if some of these parts I am about to mention appeared in Hero Factory (or prior lines). I didn’t collect HF sets (which is something I regret. Also I really only collect Bionicle sets). But from what I can tell, we get green skull warrior claws, a new chest plate, a brown axle connector, brownish-tan LOSS legs, solid maroon Bohrok eyes, brownish-tan teeth, Maroon fangs, a black protector blaster, and dark grey chain pieces. Again, I apologize if these have appeared in other sets or lines. If they have, ignore parts of this pro.
- New pieces. We get the new eye piece (in trans orange), smaller LOSS legs (which are probably referred to as horns), the legendary Mask of Control, and Umarak’s hunter mask.
- Extra stud storage? Umarak has a thing hanging off the hook sword holder that hold his extra studs. This may be stud storage and if it is, THANK YOU LEGO!
- This set has functions. The bow fires by turning the long axle, standard stuff. And Umarak can make use of the Uniter waist turning function…which I will get more into soon.

Cons:
- The horns. oh boy, they are big and they jut out. They’re kind of like Skull Basher’s horns. You knock them upward and Umarak’s mask will probably fall off. Also, they might make storage and posing on shelves a little tricky. Plus this is really the only place you see brownish-tan outside of his bow.
- The color scheme has some minor issues. Yes, there are red axles here and there. And they are noticeable. I don’t know why they used them when Gali, Uniter of water has black axels… AND THAT SET HAS ORANGE ARMOR… Plus there is a blue pin on Umarak’s back. And let’s not forget there is a tan pin connecting one of the chains to Umarak’s right shoulder pad. But jumping back to the actual color scheme though, while it is a “hunter color-scheme,” I feel some will take issue with the 5-way color scheme (Black, Maroon, Green, Brown, and Gunmetal).
- Free hanging parts. Umarak’s chains are free hanging and some people may not like that.
- The feet are a little limited in movement. While the leg build is pretty cool to see, it limits the articulation of his feet. It may causing posing problems for those trying to take a picture of him.
- The bow doesn’t have a gear. The bow is lacking a gear for the function of it. I am guessing this was a stylistic choice for the look of the bow, however.
- The Uniter torso function on Umarak is questionable. You could argue that Umarak needs to turn his body for his hook sword, fair enough. But what about his bow? You need to stand still to aim it.
- Umarak’s main weapon is a bow… While you may not consider this a con, some may find it utterly annoying and impractical. If there is one thing I have learned from fantasy games, it’s that you will have a bad time if you go up against a bunch of sword wielders with a bow. Plus Skull Grinder had a huge, mask-stealing staff… so yeah.
- Umarak has no shoulder pads if you build his shadow trap. Really Lego?
- Compared to the Mask of Creation, the Mask of Control is a little lack-luster. I feel the Mask of Control could have used more runes and I also feel it should have looked like it’s 2015 animations counterpart.

So do I recommend this set? YES. While this set does have issues, the pros outweigh them. Plus you get an awesome looking set…and another legendary mask. So yeah, go out and get this set.

Good review, Umarak is a pretty solid set and looks to be a major step up from the rather underwhelming Lord of Skull Spiders.

But what about his bow? You need to stand still to aim it.

If he was tracking a moving target he could aim his bow by swiveling his waist.

Good review. Umarak is by far my favorite set of this wave, there’s very little I can complain about with him. He just does so many things right.