Ok now, I know he isn’t exactly a moc and all and the description is probably terrible, he is one of my older and first uploads on deviantart, he is also surprisingly one of my more popular ones, people really seemed to like him. 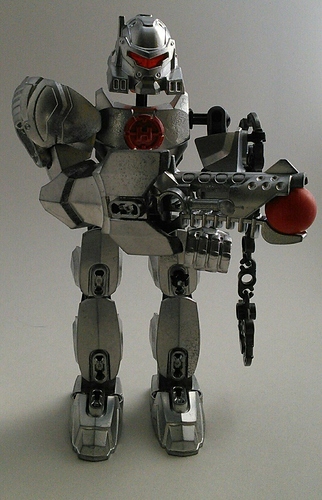 Chromeman was the 1000th hero made (ironically he was one of the first heroes mad/upgraded with the 4.0 upgrade before the breakout happened) he was made with an experimental metal that they had discovered on an unexplored planet. The metal was extremely lightweight and could reflect blaster shots and was highly conductive. He was made from the metal as a celebration for having made 1000 heroes and to test how the metal works on a hero. Because of how light the metal is he requires less energy to move so he doesn’t need a recharge as much. But he has to calculate how fast he runs and when to stop so he doesn’t run into stuff, how much force he has to put behind a jump or he will go flying and because of the metals conductivity even a small amount of electricity can shock/reboot him (the scientists are trying to develop away to use that to charge him).
Attitude: slightly pompou/vain, friendly, cheerful, outgoing, slighly reckless, comforting and he is very serious when it comes to a fight.
Attributes: He does not abide abuse of any kind toward another hero/rookie, citizens or creature and do anything he can do to stop it no matter the risk to himself.
Weapons. He carry’s one high power plasma cannon, one pair of hero cuffs, he can generate a small forcefield around himself for about one minute or less depending on how high his energy is (it takes up a lot of energy).

Well, it’s just Breakout Evo, but nice paint application! Would like to see a similar custom paint job on an original MOC!

Do you know about the speckled colours used in certain Knights Kingdom pieces? Seems it would work well with whatever you used to paint these pieces.

@Jack_Frost Ah ok, didn’t really know where to put it, thanks for changing, I’ll put me there for now.

@Huichelaar I might know of the peice and if I’m correct yeah I could see me going well.

@PakariNation99 Yeah he was a popular one, some people actually preferred some of his parts in that colour. I do tend to use my custom painted peices on my Mocs but I have had yet to have enough peices to spare to custom paint an entire moc without later regretting it, do want to do that though.

@Huichelaar That would be awesome! Thanks! (Also should I have just added this to the first reply? If so, oops.)

It’s multiple actually. I could send you a link to a list of 'em.