Welcome to BioChronicler's Chroniclered Character Discussions (quite a mouthful, isn't it? You can just call it BCCD). Today, I have chosen to discuss who this fellow named "The Shadowed One" is.

Ah, the Shadowed One. The leader of the Dark Hunters and one of the only characters to not have his name revealed (currently, only two people know his name: Ancient, and Greg Farshtey). So, who is this guy, and why is he so mysterious?

Well, for one thing, his alias sure sound intimidating. "The Shadowed One," as he prefers to be called, would give any Matoran a shiver up their bio-mechanical spines. Just look at this guy... He's looks pretty menacing. 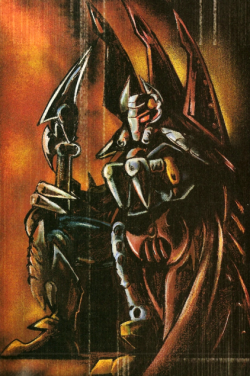 So, what exactly is his job? Well... He's the leader of the Dark Hunters. Most of his early life is foggy and unclear, so we don't know much about his origins except for the fact he created the band of mercenaries known as the Dark Hunters.

He played a crucial role throughout most of BIONICLE history. He was one of the reasons the Toa Mangai was formed (due to Turaga Dume not wanting a base for the Dark Hunters in Metru Nui). He was the one who paired Nidhiki along with Krekka (in which later he made a deal with Roodaka to mutate Nidhiki, so he could not betray them and go back to being a Toa). He also played a crucial role in the fan-faved book, Time Trap, in which he almost had the Kanohi Vahi in his possession. I won't explain any farther, because he has a huge history in place.

Anyways, The Shadowed One's role in the BIONICLE story is a major one, which is why I became so interested in the character. Unfortunatly, I never got Roodaka, so I could not build him. However, he still interested me, so I did my research, and I grew to like the character, even if I did not get to build him.

Which brings me to wanting to discuss this character. Since he is one of my favorites, I wanted to discuss this guy with you, the members of TTV Message Boards. What do you think about the Shadowed One? Is he your favorite character, or your least favorite? Discuss it here.

A big reason I like TSO is because he's not so much immoral as he is amoral. He doesn't do things because of petty agendas like Teridax. He does things for his own ambition. He allied with The Order because Teridax would get in the way of his monopoly. Sure, he didn't have the master plan or foresight that Terry had but he didn't need it. He's also the character we probably know the least about.

The Shadowed One always seemed like, the character that is going to get to the point where he can't survive. Either he gets to much power and is killed by the Order, because they perceive him as a threat, or he gets overly paranoid and kills himself.

The fact that we know so little about TSO is what sells it for me. No one except Greg now knows his name which really increases the mystery around this character. It's almost like that one guy in crime shows where the detective knows the crime boss exists, but he has no idea who he is in real life.

Come on, guys, we all know what TSO's name is: Krakalin.

No. His name is the Shadowed One and your going to like it.