This little guy was inspired by these worker bots one of Toalittleboehn’s characters made.
Check out kelratz for the links. 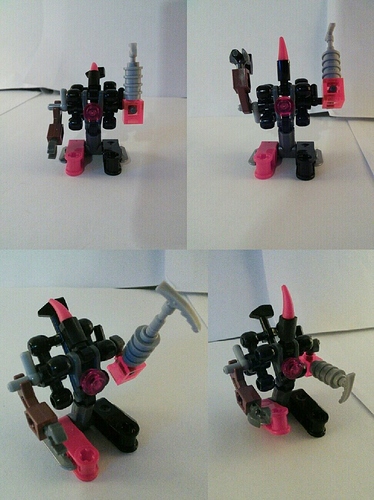 H3llo! 1 am Cl1mb0t or Cl1mb for short. 1 l0v3 2 cll1mb! Do u l1k3 2 cl1mb? U sh0uld 1t 1s amaz1ng! W3 sh0uld cl1mb 2gether! Y3s cl1imb… cl1mb… CL1MB! CL1MB! CLIMB! 3RR0R 3RR0R! Syst3m crash! R3b00t1ng, stand1ngby
Not again! This is the last time I let Kelratz try to program something. Oh well back onto the introduction!
This little fellow here was inspired by Toalittleboehn‘s Micro assistants. After seeing them I decided why not make one myself! At least that was until Kelratz managed to convince me to let him build and program it, as you can see it didn’t go to well, and I can’t get access to fix it seeing as how they were somehow put into admin access mode and Kelratz doesn’t know the code. They do run somewhat ok, they can walk and do what they were made for but sometimes crashes, as seen when they tried to introduce themselves, or glitches out and will get stuck repeating the same action or word until they get knocked out of it or crashes, as also shown by their introduction. As for their purpose, well… its to try to climb, anything, even if its not realistically climbable… shoulda seen that coming what with how Kelratz is, luckily they were actually made quite well in that design, they can climb almost as well as Kelratz, just slower and not as crazy. They are also surprisingly very knowledgeable about climbing, ranging from famous climbers, to proper climbing tips and survival skills, despite rarely using my electronics or reading, not that I have any climbing books,… at least I don’t think they use my computer much, maybe they’ reconnected to the Wi-Fi? Eh who knows.
Also luckily for them Kelratz made them extremely sturdily, seeing as how they’re a climbing bot its really helpful for if they fall, really I don’t know how strong he made them, I’ve seen them fall from some pretty crazy heights and come out with at worst their right arm loose.
Oh! And their voice is messed up, as shown whenever they talk certain letters are replaced with numbers and words that can be shortened are shortened, like texts. Good thing is they’re still relatively understandable.
Also, while I may not have solid proof of this I do believe that Nekrat had a hand in the programming, the only reason I’m saying this because I’m really certain that I have heard them saying some somewhat troubling things about killing, evil, and such while glitching or whenever they’re not being fully focused unfortunately their voice is to quiet and messed up to fully catch it and they quickly go back to normal, only good thing is they’re too messed up to ever be any real trouble, most they can do is poke you with their climbing picks, which are actually quite pointy and irritating.

Other attributes: Has an extendable climbing pick so they can reach to higher places when climbing, Two blades attached to the sides of their feet that they can dig into walls to give a better grip is slightly unbalanced and does tend to tip over every now and again yet can somehow stand fully upright. Their preferred tool is a climbing pick/hammer combo, can hunch over extremely tiny do as to fit into small places, chatterbox, talks a lot and most of it is about climbing and how awesome it is, and tends to talk loudly for most of it (!).
Pretty much indestructible, it’ll take a lot to damage this guy from attacks or falling, but can be manually dismantled fairly easily, which sucks for them seeing as how small they are.
Uses gender neutral terms as they have yet to choose which they’d prefer to be.
Never insult or say bad stuff about climbing around or to them, they go nuts, then will hit and jab you with their picks until his calms down, which can take a while, and while they can’t cause much damage it’s still quite a bit painful and irritating.
Possibly corrupted side.
Voice is messed up in such a way that some letters are replaced with numbers and words that perfectly match up with a letter or number will be replaced with it such as:
You will equal U but your will become Y0ur or such as a word like together will have the to change but not the whole word, like this, 2g3th3r.
i=1
e=3
o=0
z=2
Four becomes 4
To becomes 2
You get it.
Let me know what you think and be sure to watch ToaLittleboehn for more awesome stuff!

I might put him as a pet for the contest (if it’s allowed) but really the only time he would appear would only be if/when Kelratz meets Kahl and her mini bots so I don’t really know.

Ok I want him to be a pet/companion for Kelratz but his introduction will have to take a while (if that’s ok, if it can’t then just forget about it).
Also modify him as you want, I don’t mind seeing as how he’s just built from the few Lego peices I have. 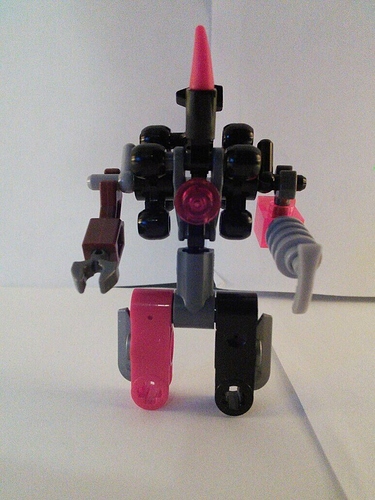 Told you he could stand straight up!
… yeah i have no idea how he can do that, especially without supports.

he’s just built from the few Lego peices I have.

@Rockho bwahahahaha! Thanks, he really is!