Ok, fair warning, I’m not the greatest artist/use a mouse for digital art.
So, I was listening to the podcast, and like a lot of other people, decided to come up with some ideas of what a G3 Rahkshi would look like.
Well…
That’s how it started at least.
There are three versions. I’ll explain my ideas behind each one. I recommend reading the descriptions so you know why I drew what I drew. 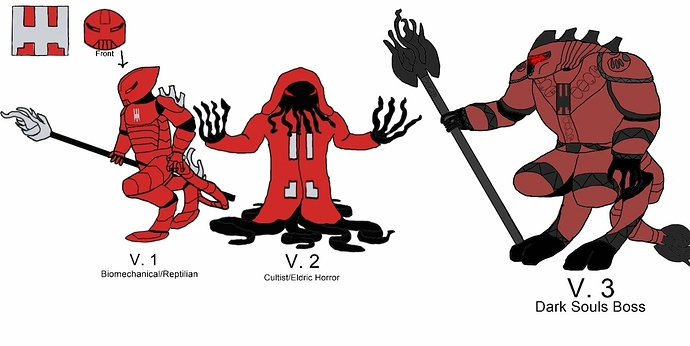 Symbol at top-left: Elemental symbol of Fear. Something in the podcast got me thinking of alternate elemental symbols. So, the Nuva symbols for other elements. This one is for fear, and the idea was a broken fire Nuva symbol. I think it works.

V.1 : So, the first one is what I would say a G3 Rahkshi should look like. Obviously more minigure-esk, but I’m sure it wouldn’t be to hard to convert. It still retains a bit of a humanoid aspect as they are former Matoran in the TTV canon. And I wanted to retain the look of the original G1 Rahkshi in this version. I think it turned out pretty well.

V. 2 : This one is semi-serious, semi-joking. TTV said these guys should be cultists, so I thought “Huh. The red one is for fear, what goes well with cultists and fear? Oh I know! Eldrich Horror!” Hence Cthulhu Face.
In Cultist Robes.

V.3 : So… This is were I went completely off the original G3 project and just wanted to make a Dark Souls version of a Rahkshi.
I’m actually really happy with it, and I’m probably gonna draw more Dark Souls-esk Bionicle.
It was a lot of fun.

So, I hope you enjoyed my one and a half G3 concept Rahkshi.

I like the 2nd and 3rd concepts the most, their features really embody fear.

I can see that.
The reason for that is I was basing them off of the Podcast about G3 Rahkshi. They said they were former matoran, so I figured going for a more “humanoid” shape with them.
Or at least…
That’s how it started. I did kinda go off the deep end a little with the other two.