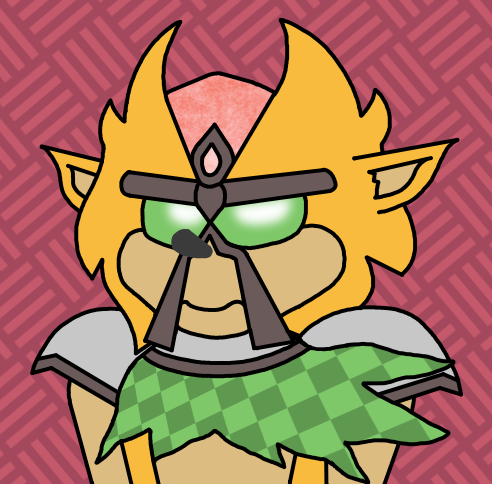 Yes, this new pfp of mine’s got a purpose like the previous one. This one being another conceptual drawing of something I have for my own FNaS AU: The Greenlit Chronicles. This time we have Ignikanic, who is a special character in his own regard. And yes, this is Five Nights at Sonic’s alternate universe stuff I’m talking about here. Note that not everything I mentioned is complete, and rather in the planning stages.

Ignikanic is the only Golden Sonic out of the 3 dimensions mainly focused in the AU’s storytelling that isn’t evil. He’s also Dimension 2’s Golden Sonic, who didn’t give up hope and kept his spiritual self in his own body. His goals are to find out the answers to anything related with him, be in a stable body, and visit the very dimension that caused him to be this way (being Dimension 1).

He would not become what is called “Ignikanic” until the end of Greenlit Revival, where he finally fulfills one of his goals. Like the Golden Sonic of Dimension 1, he decided to grant himself control of his physical form when he was about to reform his body. In the wrong hands, it’s a very dangerous ability that makes the clone a real threat, but the reverse can be said if it’s in the right hands.

His body’s main form is what you see here, except as a conceptual design. His appearance is like a contract to Greenlit Dr. Golden, who appears more smoother and brighter than the golden doctor. Like I said before, he is capable of changing his body, and he puts that ability to great use. As a result, Ignikanic becomes a truly powerful clone with great potential in himself.

Now that he’s in such a form, it wasn’t long until he would attempt to fulfill another of his goals: visiting Dimension 1. This was a success, but he came in at the wrong time, where he would end up with the same fate as the Freedom Clones. This leads into his role in Lucid Clones, where he becomes the new leader of the team that would change his teammates’ bodies in order to adapt to the harshness of the pocket dimension. Like his teammates, he put his powers and abilities to use throughout the difficult journey and awakened his inner spirit.

Enough lore for now, as I describe all of the other stuff behind him. I based the conceptual design off of the legendary Kanohi Ignika, known as the Mask of Life and also a part of the golden clone’s name. Zero from the Mega Man X series was an inspiration to the design, while the rest of the design is somewhat original. That pink part of his is actually supposed to be a very hard exterior of his brain that is basically impossible to break, with the interior having the brain itself. His ears are now like elf ears in how they are placed, but remain looking Sonic-esqe.

Ignikanic possesses bravery and courage, with some seriousness to boot. However, he is not strict and is rather one who shows some form of care for others. Despite these positive traits, the anxiety he received from wanting to know everything related to him remains. As a result, he has a tendency to point out on all sorts of things in order to get more answers to his questions, which can sometimes be an annoyance to others.

That’s everything needed to be known about Ignikanic so far. On the next post related to my FNaS AU, I shall get to Lucid Clone Sonic.

FUN FACT: I kept forgetting to give Ignikanic a nose twice, as I drew him previously one time. What you see here is the finalized version where I remembered to give him a nose.

I do like how much thought you’re putting into these. It’s clear that you’ve put a lot of effort into your story, and that you’re supporting it with additional artwork is pretty cool.

What you said is basically correct, even though I haven’t completed the entire thing just yet. There’s more art I did than just the ones I posted here, and they’re actually on my GameJolt account. I didn’t put them here because I didn’t want to risk getting my account under hot water, as designs for an AU of a fangame like FNaS is bound to have some scary designs.

I do intend to continue posting AU stuff here though, but the future posts I would put here will likely just focus on chapters such as Freedom Clones and Lucid Clones. It is nice to see people like you giving FNaS and/or something FNaS-related a chance, no matter how wacky the idea sounds. After all, FNaS did originate from an inside joke.