It’s that time again: that time where I just can’t resist and just have to draw my special lad.

But at least this time he actually looks like a living being and doesn’t just have the one face. 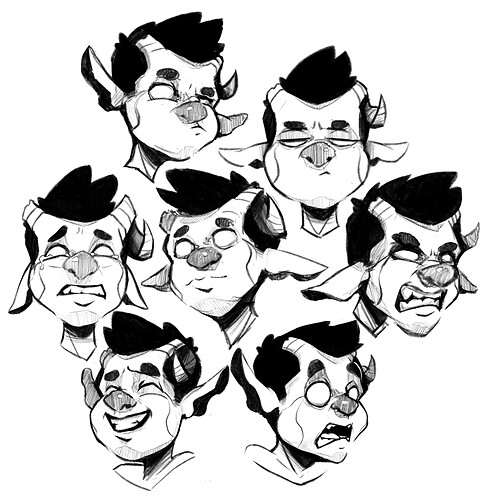 Of all of these, I don’t think I really like the surprised/frightened one on the bottom right. It was the last one I did and the perspective got jumbled around quite a bit while making it. It wasn’t as well-thought out or envisioned as the other ones, at least.

Even though Connie’s general disposition is usually quite cheerful, my favorites of these are actually the sad and annoyed ones; I think it’s because I wanted to focus on how Connie’s ears play into his expressions and those two were probably the best executed in that regard.

I’ve been having a lot of fun lately making his ears look and act much more like a deer’s. Not only is it more unique and expressive, but it also fits him more as a half-dryad than normal sorts of tiefling or elf ears.

I can only imagine Pakari contorting his face in a mirror trying to do these.

What are you talking about, masks can’t change expression?