This is my third MOC, and In it I integrated CCBS. Courier, formerly known as Toa Tuba, was a Toa of Fire on the southern continent. He became one of the first Toa to fall victim to the Visorak, becoming a Toa Hordika. Although extremely intelligent, Tuba was very impulsive by nature, and the Hordika venom worsened this. When a Dark hunter came to his village and slayed the Turaga, Tuba’s Hordika instincts got the better of him and he hunted down and killed the Dark Hunter Responsible. Even worse, Toa Hordika Tuba left a note for the Shadowed One on the Dark Hunter’s corpse, telling to stay far from his village. As a result, the Dark Hunters launched a massive raid on the village. Killing all of his fellow Toa and capturing him, hoping to recruit him. However, on the way to Odina, Botar appeared on the ship and took Tuba. Instead of taking him to the pit as usual, Botar took Tuba to Daxia, where he was trained by Toa Helryx herself and recruited to become a courier for the Order of Mata Nui. He was suitable because most people would mistake him for a Rahi, so he wouldn’t raise eyebrows when delivering messages to undercover agents. Occasionally, he is sent on real missions, and on those he brings a sword and shield. 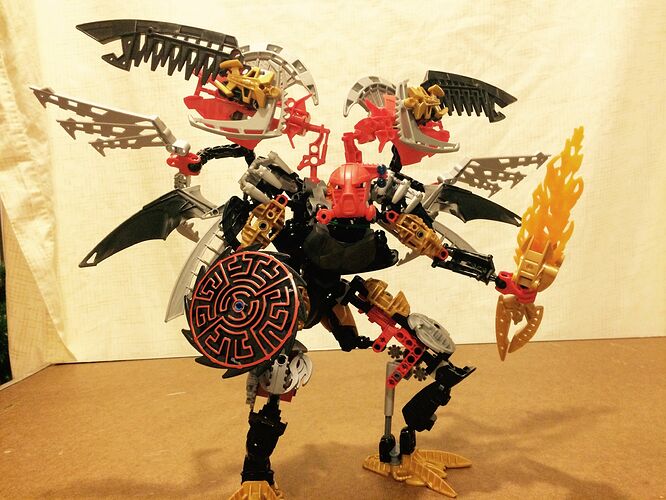 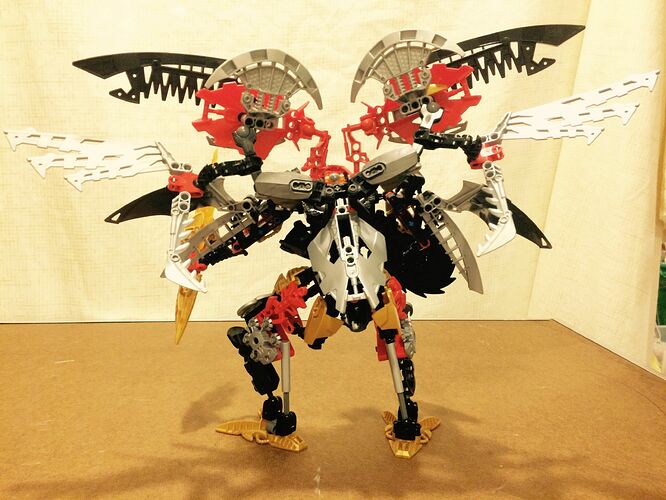 3 words: this is mess

nearly had a heart attack man!

…still an alright MOC. Eye-searing but still alright… I’ll let someone else make words on this

He looks more like a warlord than a courier.

For a third moc, he’s quite good.

From what I can tell, the colorscheme is relatively consistent, though you may want to take off the grey or one of the metallic colors.

As noted by everyone else, the wings make him quite an overwhelming sight, but not in a good way. If you’re doing massive wings like that, I recommend that you use many of one piece rather than a bunch of different pieces. That tends makes all the difference between overwhelmingly messy and stunning.

The torso and legs look decent, and I think you’re on the right track. Keep it up!

Not bad for a 3rd MOC

Resists the temptation to post an overly harsh critique

Try something a bit less…showy okay?

I find this guy to be a pretty good MOC. I like the consistent color scheme, but some parts look kinda messy to me. Still, great job!

I’ll let someone else make words on this

Looks okay for a third MOC. Let me just give you some advice that’s helped me and (maybe) a lot of other people:

Okay I saw this before I did my most recent MOC