I desited to make this topic so that people here could discus about the Crash Bandicoot remastered trilogy that is going to be released on PS4 in 2017.

one of the things that i personaly am wondering about is weather or not Tawna from Crash Bandicoot will be in the remastered Crash Bandicoot. The reason is because for one, she had little to no role in the game other than being the damsel in distress, and really you could just replace her with any random female and the role would not change much, infact one could even replace Tawna with Coco, the only change would be that instead of Crash trying to save his girlfriend, he now would be trying to save his sister, which makes for a better continuity for the games… given how Coco just appeared in Crash Bandicoot 2 and the only story detail we have is that she was created by Nitrus. Brio to help Crash.

Now the second reason im unsure that Tawna will be in the remastered Crash Bandicoot is because of… her design…:

im just going to let this part from her Trivia section of the Crash Bandicoot wiki speak for me:

After Crash Bandicoot, Naughty Dog removed her from the series because they were not happy with her forced redesign, as she did not closely resemble their original intentions. Her removal was also due to complaints from Universal Interactive about her being too inappropriate for a family game and caused to be a sexual theme character for mature audience. According to character designer Charles Zembillas, Sony of Japan also pushed for a more family-friendly ally for Crash during the second game, leading to Coco being conceived.

true, they could redesign her, but like i said, she had a really small role in the plot other than being “the reward” and lets not forget the final part here, namely that in canon, she left Crash for Pinstripe… this guy: 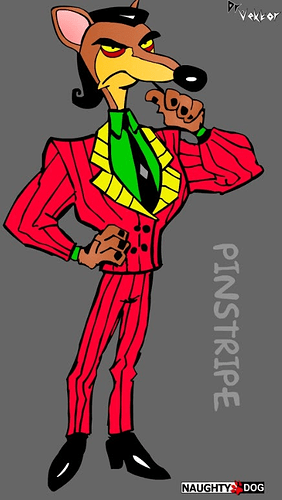 Pasted image438×775 254 KB
you know… the guy who is the 4th boss in the game… the guy who tried to shoot Crash with a Tommy Gun!!!
https://www.youtube.com/watch?v=_wWoNQacNHg
im not kidding, thats the canon story reason for why Tawna did not return in the games again, she left Crash for Pinstripe, which kind of makes Crash journey to save her a bit pointless.

But that is what im wondering about with these games, so please give your opinions on these games.

Now the second reason im unsure that Tawna will be in the remastered Crash Bandicoot is because of… her design…:

i beg to differ tbh

honestly, it’s not bad enough for it to not get included in the game, even considering the “standards” of the gaming industry nowadays

despite her purpose being a damsel in distress sort of character, does that really matter that much? sure, some people might whine about it at some point, but that doesn’t mean they’ll take her out of the game

and even though you could probably get away with more stuff back then than you could now, her design doesn’t merit a removal or change in the game (referring to Crash 1)

it could happen anyways

wouldn’t change much though.

like i said, they could replace her with Coco and really that would be a small retcon but i feel that its better for the story, because as i said, Coco did not appeare until Crash Bandicoot 2, and there she just appeared and had no in game introduction.

really this trilogy might get something like the Ducktales remake where in they change the story, though i think it will be a small change for the Crash games because in Ducktales… there was little to no story other than “Scrouge is greedy and wants to search for more treasure for his Money Bin”

No clue how it will turn out. Just waiting for gameplay.

ok, we now have a trailer people:
https://www.youtube.com/watch?v=ZraxEa0gLzY
so, does it look good? or does it look bad?

its up to you, but personaly this looks good (though im getting a skylander vibe because of how the cutscene looks, it just reminds me of Skylanders Imaginators).