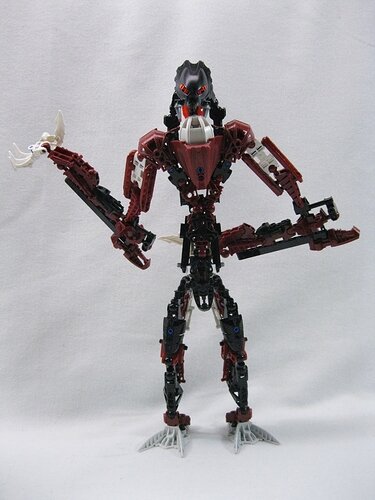 Flesh and bone.
Muscle and tendon.
Metal scorched by atmosphere, welded to his form.
A skull, cast from star burnt metal, upon his head.
And a dying sun’s flames contained within the aged helm.
An eldritch design, of which the like can only be born from one’s creativity given allowance to manifest a physical form. 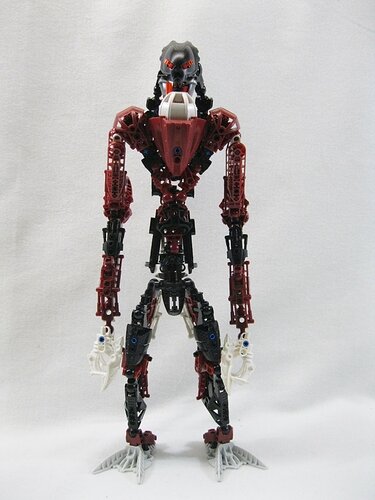 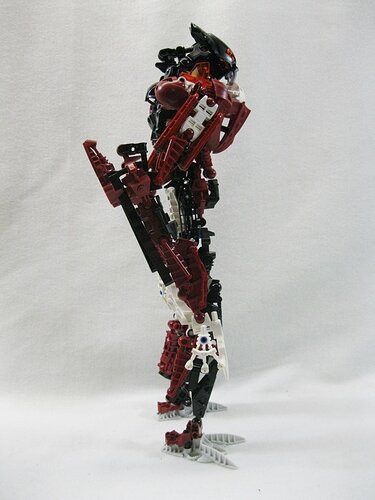 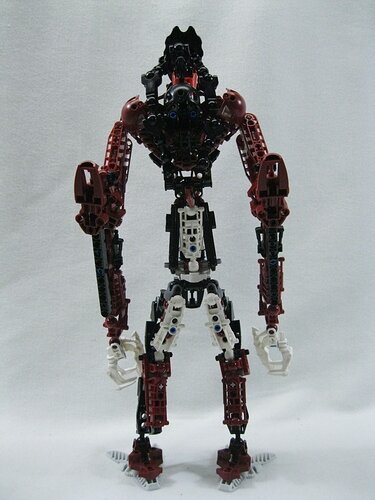 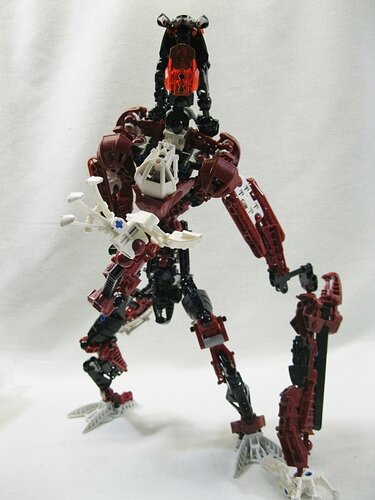 Creativity can oft be described as a spark. A temporary, if still long lived flare. But what is not oft described is just how powerful such a spark can be, and even rarer is it considered just what a spark may be.
For a star, a sun itself, can be considered such.
A flame of limited life, but while alive of power unimaginable, unconquerable, and untamable. Yet in death even stronger, and what is a spark, but a flame hovering on the edge of death? 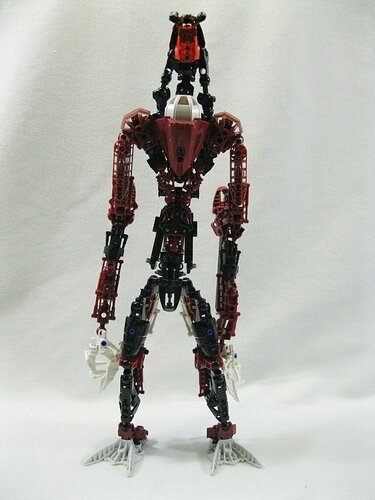 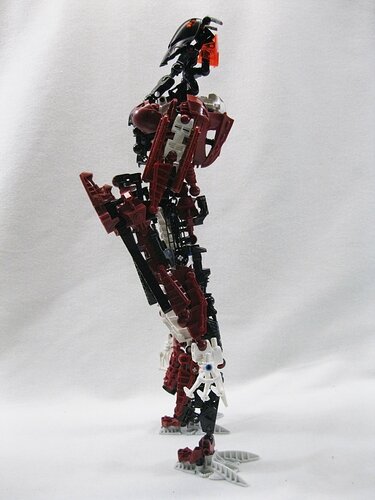 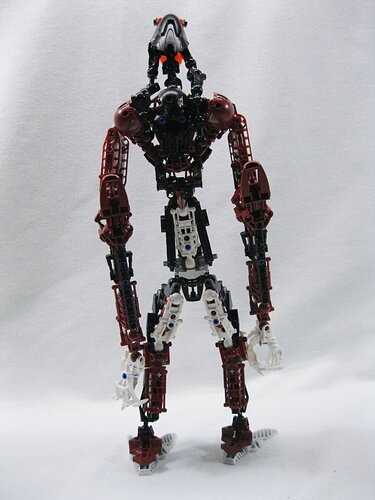 Now this, this was a fun build! So I do know I have quite a number of self-Mocs at this point, but as I’ve noted despite my attempts I’ve yet to really make a ‘self’-Moc. A Moc that’s supposed to really, well, embody me.
That’s where this big guy (and boy howdy is he ever a big guy) comes in.

Creator is supposed to be exactly what he comes off to be. The physical embodiment of me as a set… Though more so actually the physical manifestation of my creative drive.

Here’s the thing about me: I love body horror. Particularly the more eldritch styles. Fangs, multiple eyes, and/or multiple pupils per eye, weirdly disjointed limbs, odd tentacles, monstrous sizes, and uncanny builds. I love it (and hate it (while beautiful to see in film and/or art it is still so horrifying (I’ve seen The Thing and man, does very little really top just how cool, yet still so, so disturbing that was to watch))) all!

Now, I know he doesn’t exactly, well… give off his description in build. that’s kind of… well, impossible without heavily modified pieces, but I figure I at least managed to get him to give off the sense of it once one’s made aware of how he’s supposed to look, and if I ever got/did a drawing of him he’d be in that style. 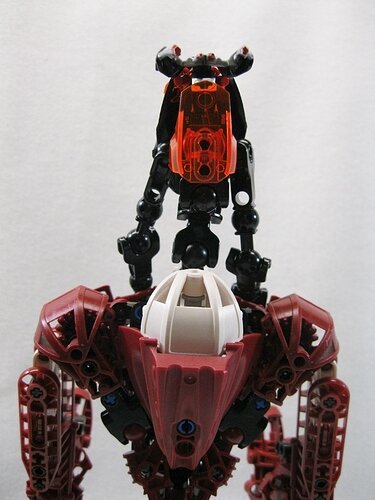 I have got to admit this was one of my favourite bits for the build.

From the way I managed to give him legit custom eyes with pupils, to just how well it managed to keep fitting in with his build despite how it’s ‘■■■■■’ changed it’s overall design, and size.

Now I know it doesn’t really manage to give of that feel of a ‘dying sun’s flames’, much less a spark at all really, but it was the best I could really come up with, it fits well, and honestly said description and all would be more up to added effects to really get the necessary impact anyways.

Also, here’s some size comparisons that really help just show off how big (yet still surprisingly stable) this guy is: 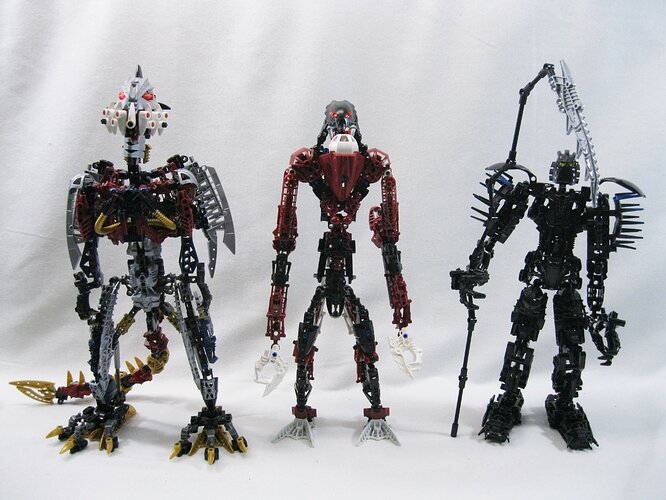 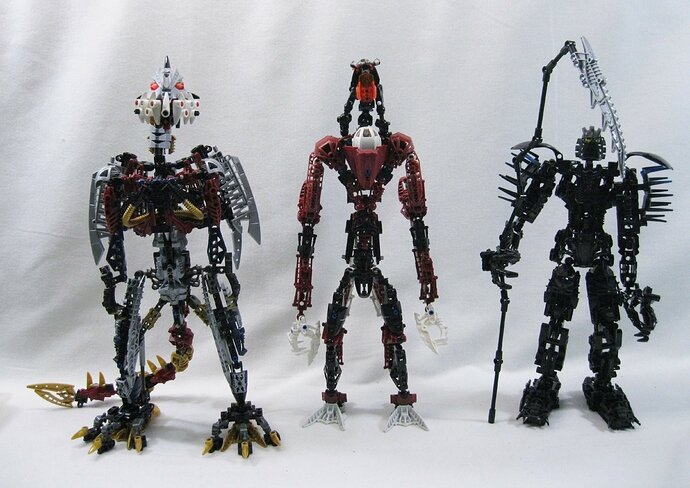 Fun fact: Creator’s design originally allowed for his entire body to extend. Literally each section could extend, from his torso to his limbs. And it honestly really did manage to pull of the disturbing lanky and twisted, yet still fitting build idea he was originally inspired from.

Unfortunately the feature had to be removed after I realized how large (and subsequently heavy) his torso would need to be to match up with his limb length. Fortunately though I did manage to figure out how to reconnect all the limbs in a much more stable manner upon removing the previous connections, so really very little of his exterior build/look ended up changed.

His head and elbows are the only sections which didn’t have to be re-Mocced. Though the elbows were more so because I couldn’t figure out any way that’d fit just as well as the original did.

The arms are maybe a little to long, but it looks great in rest!

Ah, ja. Kind of a personal design on my behalf. Helped keep up that ‘something is wrong/unnatural’ look, and is also a mini semi-reversal on my own proportions.
Where I have long legs, he instead has long arms!.. And also a thin torso, yet oddly wide/strongly built looking shoulders. (Also lets me keep his crazy elbow build/extension which I really love the look of.)

The torso looks too slim, and kinda too long. But it looks pretty good overall.

Ah, ja. I do see that. I figure I at least managed to even it out enough with the filler bars I hooked up to his sides, but there are still some areas that could be a little more… greebled with.

Jyep, a very tall boi. (And also a surprisingly stable despite his height boi.)

I approve wholeheartedly. The concept is something I have considered myself, and in my mind you did it justice.

Oh, wow! Thanks for the praise! Surprised to hear I managed to pull off a concept you’d thought up before in an effective manner!