Cretan the Sorcerer and SEK-3R7 "Seeker"

The following MOCs, or at least the first two, were contest entries on Lego.com. The contest was hosted by a user called Knowswhatno1caresabout and the contest itself was to just make a character in his non-Lego related, self-created universe called Caan-5l. Besides a few names, there isn’t much that should be confusing, but if you want to know more on this universe:

There’s the link to all the information on Caan-5l you need, if you want to read all of that stuff. Though it’s completely unnecessary. Anyways, onto the two year-old MOCs! 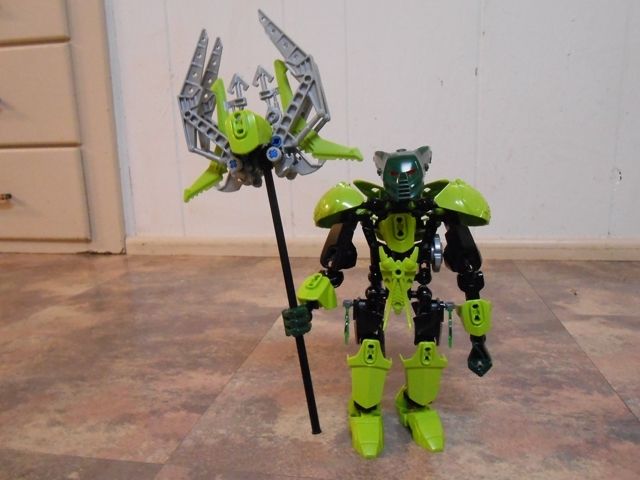 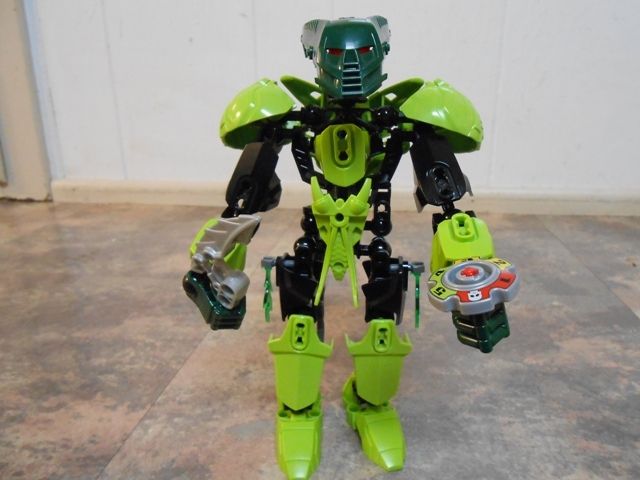 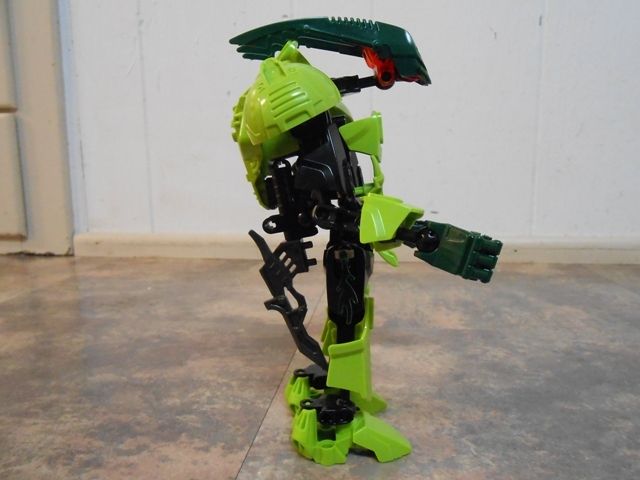 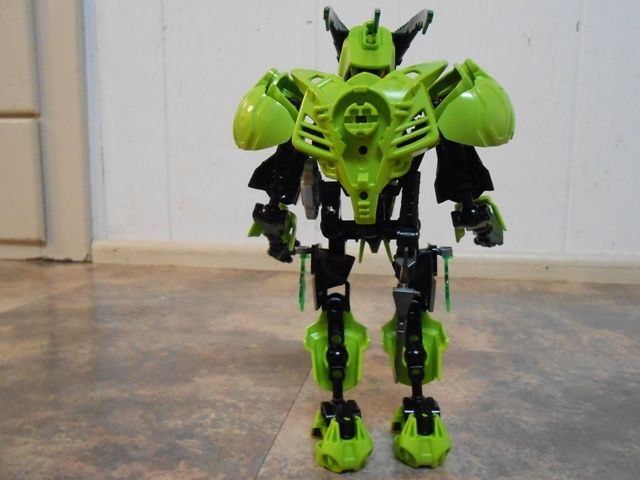 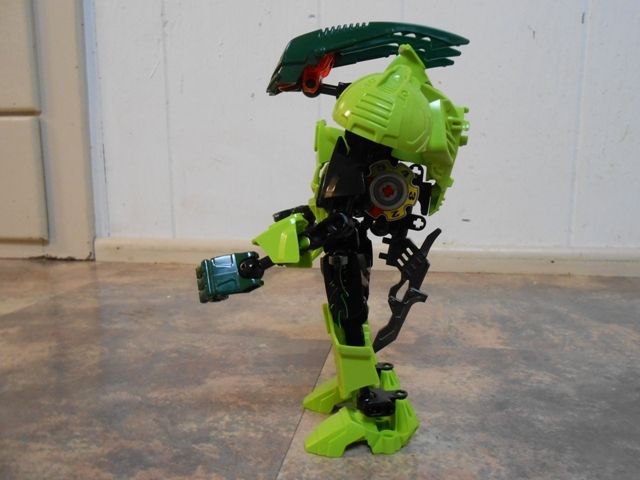 “You don’t believe my power infidel? Then BURN!”–Cretan right before cooking an Azukon.

Cretan the Sorcerer is an Azukon revered by those in Takaia’s kingdom for his magic abilities. He can heal the sick and wounded, call out demons, predict the future, cause fire to spew out from his staff, etc… As such, this makes him very popular with the people, but in reality he’s a fake. Yes, he does black magic and other sorcery, but it’s just tricks and illusions. Though he is a skilled alchemist, having a great knowledge of herbs and plants that he can use to heal various sicknesses. His decorative staff signifies his great popularity with the people, but is much more of an ingenious invention that only he knows since he created it. The pole of the staff contains a type of swamp gas that is flammable. When the gas is released, the force of it causes certain metal pieces of the staff to vibrate and rub against each other, creating sparks. The sparks then ignite the gas, causing it to go ablaze. The gas is very pressurized within the staff, so when the gas is let out, it does so with a lot of force, and after it ignites, the combination of the force and speed of the gas escaping causes the fire at the end/open of the staff to stretch for several feet. This makes his staff act very much like a flamethrower. The swamp gas he uses is in a very murky, dangerous area full of quick sand, so few travel in that area. Collecting it can be dangerous as well if done wrong. As well as breathing in the gas, which can cause one to black out for several minutes. He also carries a dagger and his predicting gear/circle.

History: Cretan was originally a fighter in an arena. Though a skilled fighter in hand-to-hand, swords/daggers, and staffs, and pretty strong, he mainly relied on his cunning and wit to win battles. He became a crowd favorite, but he didn’t want to fight in the arena anymore. As legend has it, he received a vision and was given his earlier mentioned powers. His fame and popularity grew, but he wanted more and developed a plan to overthrow the king. Which goes something as the following:

“In order to become king, one must have the support of the people or your rule won’t last long. Support of the people isn’t enough though, having great amounts of wealth will greatly help. Having an abundance of wealthy will help keep the kingdom happy and in good shape. In order to do so, I must learn the secrets of the goldsmiths. Maybe I’ll find a way to turn things into gold. If all else fails, learn how to control the main food source first.”

Thus he often goes out exploring, trying to find ways to control the Kadalkas or spy on goldsmiths. During one of these outings, he witness the crash of the drones and went to investigate. He confronts one of the drones that got separated from the group and tries to get the drone to work with him on “making the main food source easier to obtain”. 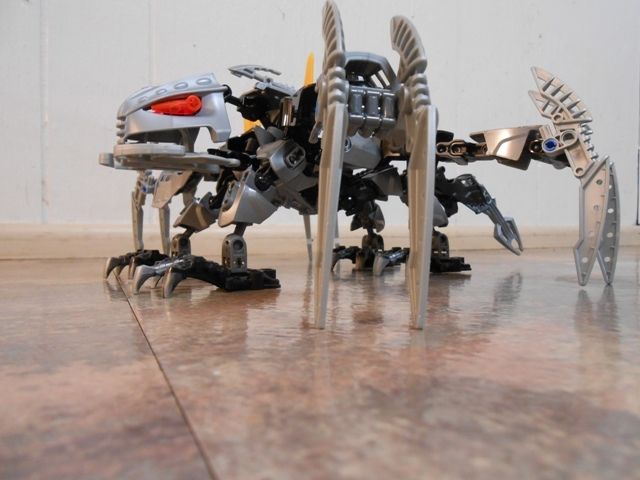 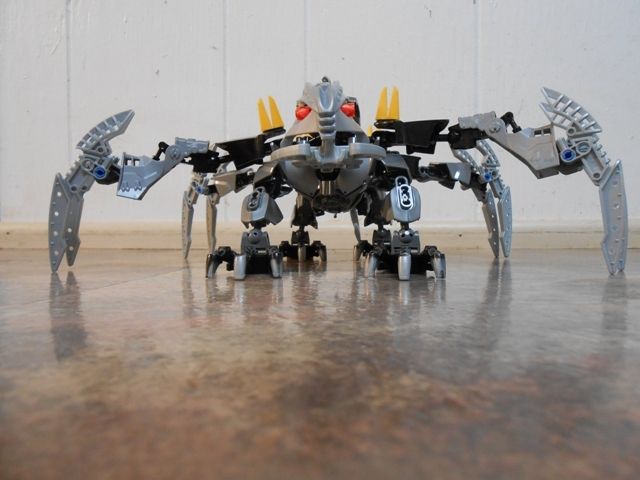 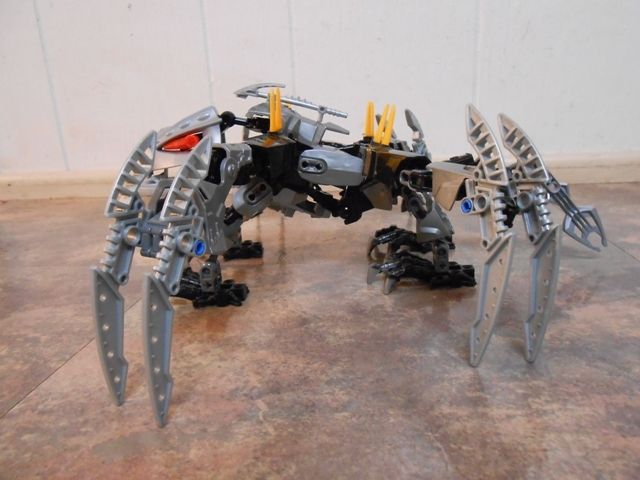 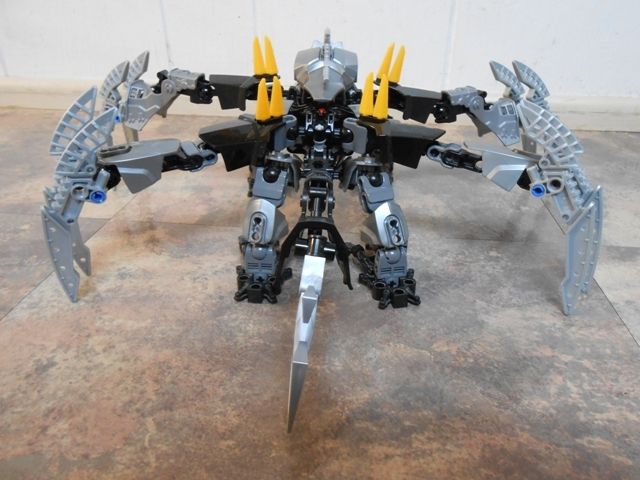 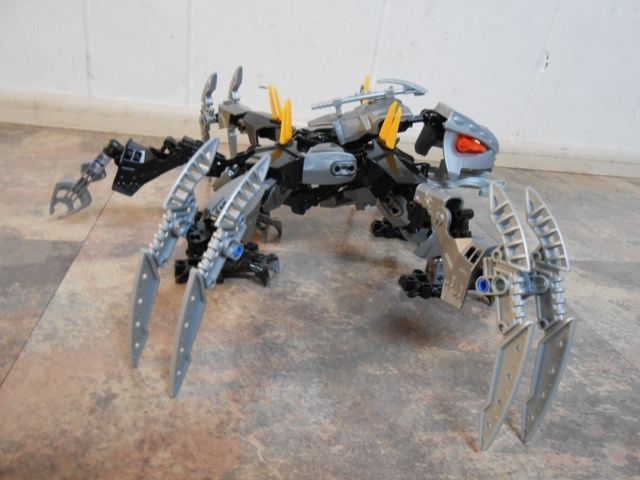 “Your purpose is to help me.”–“Seeker” and Cretan early in their meeting.

SEK-3R7 otherwise known as his nickname, “Seeker,” was one of the five drones that crashed on Caan-5l. Seeker was designed to be animalistic so that other planets’ inhabitants would assume that it’s just a strange creature. He is specifically designed for scaling, well, anything. Whether it be buildings, sheer rock cliffs, trees, Seeker can climb them all and prefers to be high above the ground. His four extra legs and tail are designed to help him climb. The claws and stinger tail are razor sharp and can heat up to high temperatures to make it easier to claw into things. These extra limbs are also useful for warding off attackers and he can howl at super sonic pitches that causes people to become dizzy and pass out because of its intensity. He can fire energy blasts from his mouth as well which has settings for stun and damaging.

History: When their ship crashed, Seeker forgot everything like the others. He didn’t know where he was, why he was there, or what he should do. One thing he found out quickly is that he liked being up in the trees than on the ground. He also felt this unexplainable urge to find wildlife and observe them. As the group of drones were searching the planet, Seeker decided he had enough time to climb to the top of a tree and back down without getting separated from the others. This proved to be wrong as he got side tracked by a couple of things. When he came back down most of the way, he could no longer see the rest of the group. Now friendless and even more lost, Seeker began to lose hope. That’s when Cretan the Sorcerer came and with his words of encouragement, a purpose that sounded like it was for a good cause, to not be lost in the swamp, and a better chance to find answers, was all he needed to hear. Thus Cretan was able to convince Seeker into helping him and the drone followed him, unaware of the sinister plans the native had for him.

Another interesting fact about Seeker is that he doesn’t like creatures with more limbs than they could have, such as the Iloek. Though he doesn’t mind the fact that he has eight legs and thinks that he has the perfect amount of limbs for himself.

Now, those two were created two years ago. During the Month of Fire, a user by the name Chrisataur hosted a Month of Fire contest. The goal was to make a fiery revamp of one of your older MOCs. As the Month of Fire was last August, this version of them is a bit more recent. 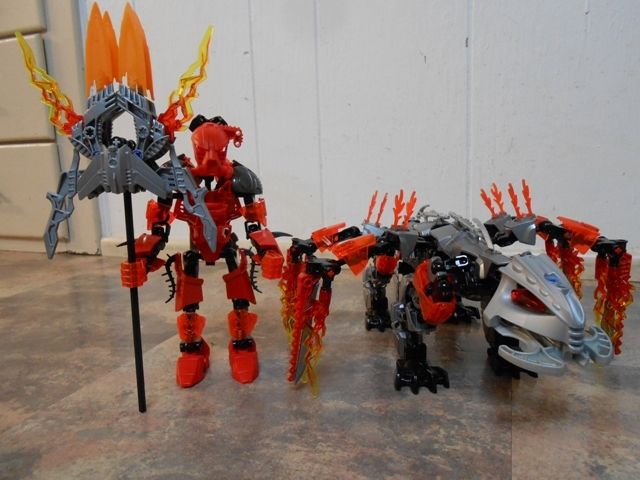 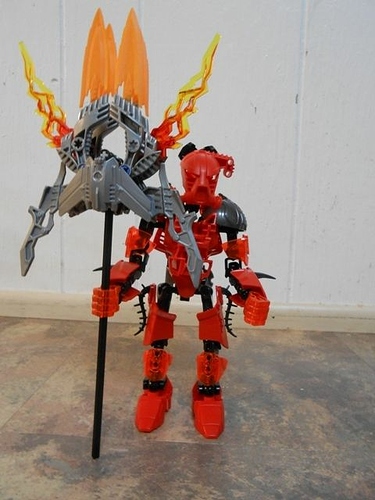 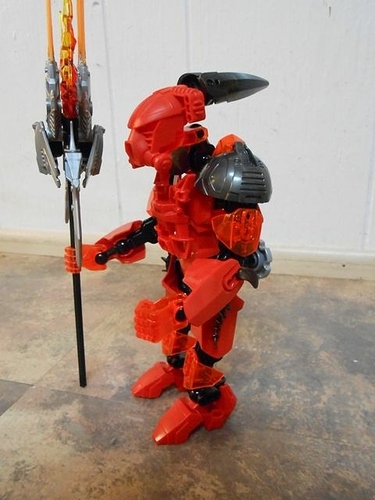 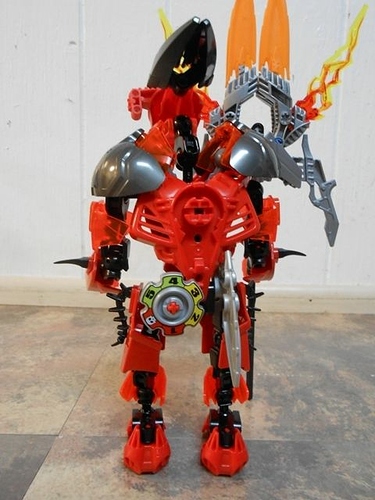 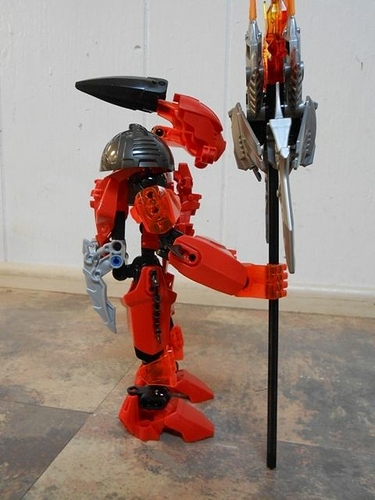 “You don’t believe in me? Then BURN!”–Cretan the Sorcerer.

For once, Cretan has made a big mistake. In an attempt to gain more power, he hastily performed some black magic stunt. As a result, Cretan became possessed by some demon lord. The demon completely changed Cretan’s body, literally burning the old one away and giving birth to his current form. “Seeker” was terrified, watching Cretan change. Before the drone could get away, the demon sent part of himself inside “Skeeker,” transforming it into a more fiery, demonic form. Now King Takaia has a big problem, as Cretan turns everything in his path to ashes and will take the small empire by force.

Cretan now has actual magic abilities, capable of performing unnatural things like telekinesis and hypnotism. He has the strength of ten Azukon and touching him leaves severe burns. His staff can now unleash unlimited amount of demonic fire, capable of burning both mind and body. All his fighting skills have increased as well. 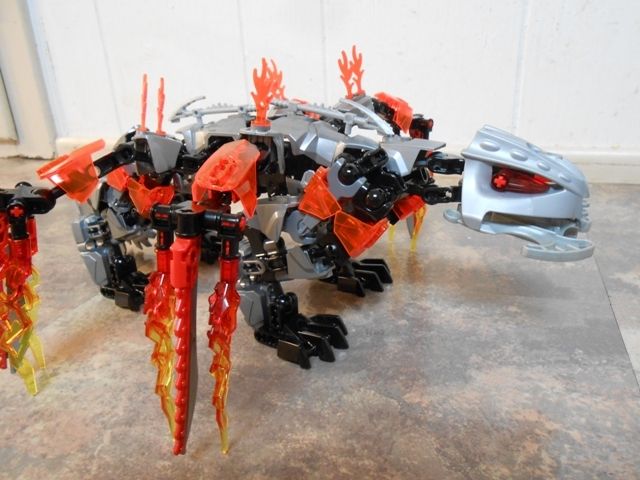 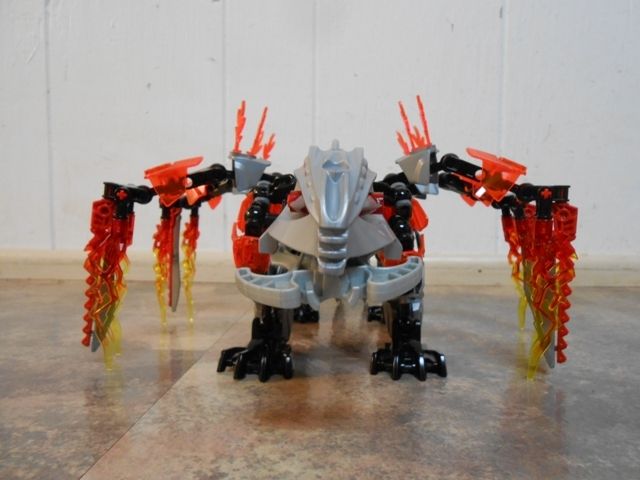 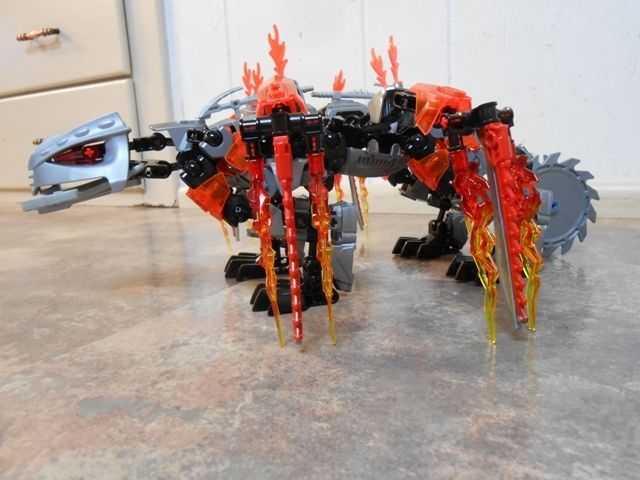 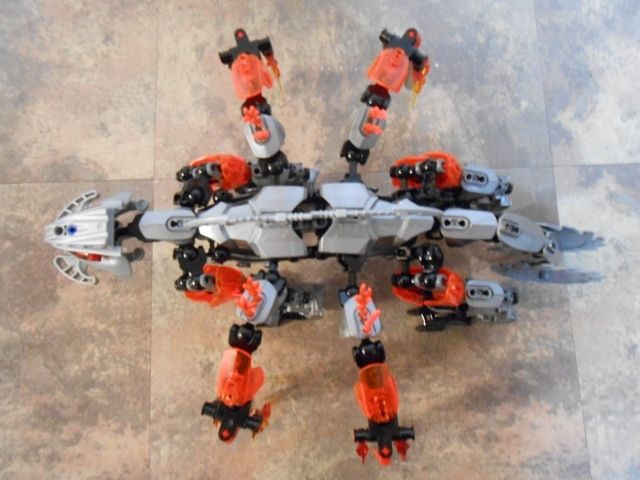 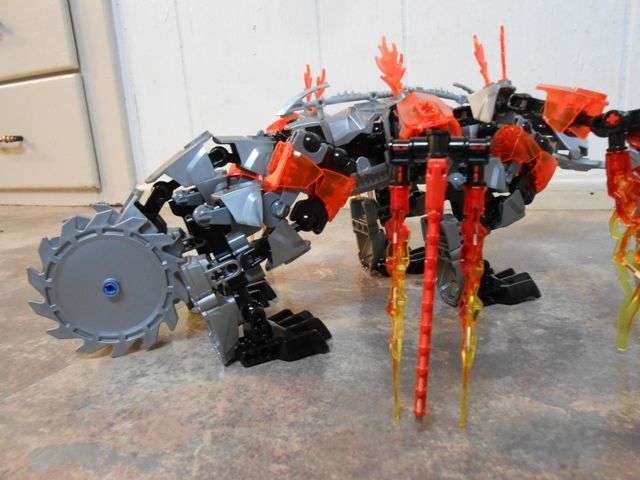 Things could not be worse for the drone known as SEK-3R7, aka “Seeker.” After crash landing on an unknown planet and losing his memory, he soon looses the rest of his robot buddies. Lost and confused, Cretan comes to his “rescue” and gives him a purpose. But when Cretan is accidently summons a demon that possesses the trickster, “Skeeker” tries to run away. But he is quickly possessed as well and transformed into some blend of advance science and the supernatural, spiritual and physical.

Now “Seeker’s” extra four limbs can stab/cut through anything as well as be flamethrowers or launch fireballs. His sonic pitch now shatters skulls and launches an unholy energy beam, fireball mix. “Seeker” is now twice his size and physically is three times more powerful than his previous form.

…I find it interesting to compare the two, since over a year of time had past between their creation. With Cretan, I think I didn’t improve at all and maybe even did worse than the original version. At least “Seeker” looks much better than his original form.

Those are some interesting beasts

This is some good stuff, especially the silver one.

These are very creative. Lol idk what to say here😛

“You don’t believe my power infidel? Then BURN!”–Cretan right before cooking an Azukon.

“You don’t believe in me? Then BURN!”–Cretan the Sorcerer.