So yea, I updated Crimson. big deal….well yea…these are some of the only decent pictures of him. I have mainly just put stuff on top of him. but I think it helps with the look I was going for. So please know that he HAS been changed, but it is not that major. So lets get to it!

NAME: “Crimson” “Red scourge” “Blood drinker” “shredder” “monster” “Trigger” and many more. he tends to go by Crimson.
GENDER: male.
Race: unknown.
WEAPONS: a lot of blades and things that go boom.
AFFILIATION: neutral.
FAMILY: none.
HOMEWORLD: none.
COLOR: Reds and blacks, a bit of grey.
PERSONALITY: Cheerful and friendly to those he trusts. he also tends to have his own look on life yet he is a murderous psycho, and he shows it proudly. He is also prone to talking to inanimate objects.
BIO: unknown. his past is shrouded in mystery. and most people that did know have been murdered and found with a capital red ‘C’ Painted on them with their own blood.

ON TO THE MOC! I will let the pictures to the talking.

Thanks, even if he is not that simple. Thanks again!

Well, simple compared to some other things

Yea, and I guess CCBS gives the aura of simplicity…

Arch, Is that you? 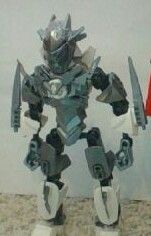 No, that is one of my MOCs, Viperex. but yes, she does look a lot like him…not meant to, but the visor and colors…yeeeaaa…should have stayed with purple.

Very nice like the design of him and his colors. One thing
though his head seems different…

I did change it a bit. he now has a taller visor and the TECHNIC pieces are long so they will not wobble.