Over the summer, I created about 40 custom minifigs. Here are 15. Like my bionicle mocs, most of these do not have names, but I will list above the pic the ones that do. 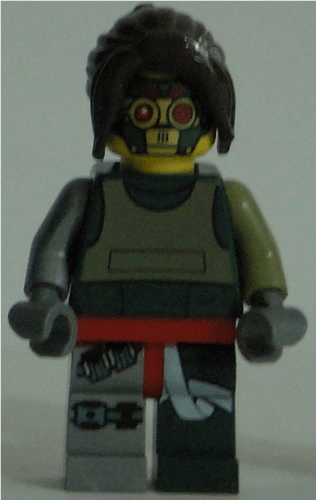 Oh, yeah. Um, that was not my intent at all, but it does look like that, huh?

I wasn’t going to mention the hips, but I do like that fig in specific, has a very cyborg feel to it.

This minifig started from Nya’s face from Ninjago. I just wanted to make a minifig with that color scheme. I kind of thought up a story when I created her though. She, aong with her brother (to the left of her) got into a bad “accident” when they young. She barely survived, and was made mostly mechanical. Similar to Darth Vader, her suit is like life support for the few remaining non-mechanical parts she has left. Without her suit, she would die.

The first batch of minifigs are a fine bunch, though the fourth minifigure shown looks odd with the inclusion of the cape and bright red hip piece. I would personally suggest taking the cape off and replace it with a red one.

The second group is pretty cool! Just give the four on the right generic Clone blasters and the one furthest to the right a largish gun and they’ll be golden.

The third batch is a mixed bag IMO. The first one is pretty sweet, almost to the point of looking like a BrikWars Hero fig. The second is a bit too generic for my taste, with it lacking anything to give it that extra charm necessary to make a memorable minifigure. The one in the middle is cool in theory; a robo-ghost sounds pretty rad. The issue I take with it is the hair, which adds three different concepts that don’t work out too well together. A basic helmet with a visor would fix that right up. The fourth is pretty messy. The legs chosen clash with one another and the red hip piece doesn’t help. The torso is alright, though I don’t think the cybernetic head chosen really compliments it. The last fig is pretty cool (but a cape would make it perfect.

Coolio. The troopers are my favourite!

Dang it. Please ignore the first picture you see.