My second art piece this month and it’s another blue robot character. lol

This is a redesign of a robot character I had drawn back in February, but I couldn’t think of a proper name for him then. Now, I finally have a name for him: Cynos Wulver. 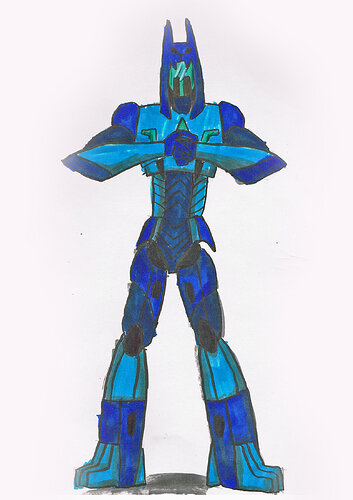 The name ‘Cynos’ is derived from cynocephali, the Greco-Latin name for legendary dog headed humanoids, that appeared as mythical races and deities throughout human history. ‘Wulver’ comes from a legend of a benevolent werewolf like creature that lived in the Shetland Islands off of the coast of Scotland.

I kinda see Cynos as a reimagining of a robot character I came up with as a kid called Carno. Carno was the leader of the Zordicans, a race of robots who instead of transforming into vehicles or animals, used zord like machines to form Megazord-esque battle armor. They fought to save the galaxy from the evil Skullrons (yes, I used skeleton villains) and the Mirrons (evil duplicates from another universe). It was kinda my own rip-off of Transformers, the only difference was the robots used Zords instead of transforming themselves. I called this wonderfully awful story ‘Zord Wars.’

I feel like a broadsword or a hammer down the middle would look cool.