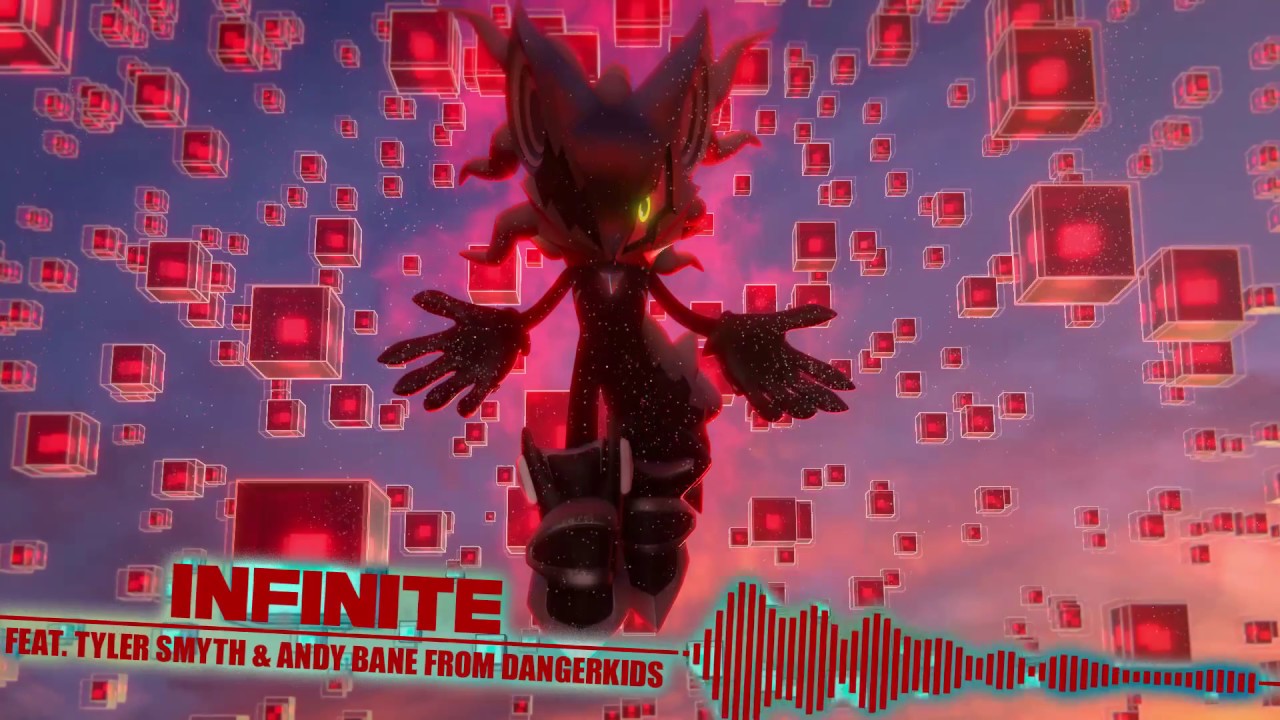 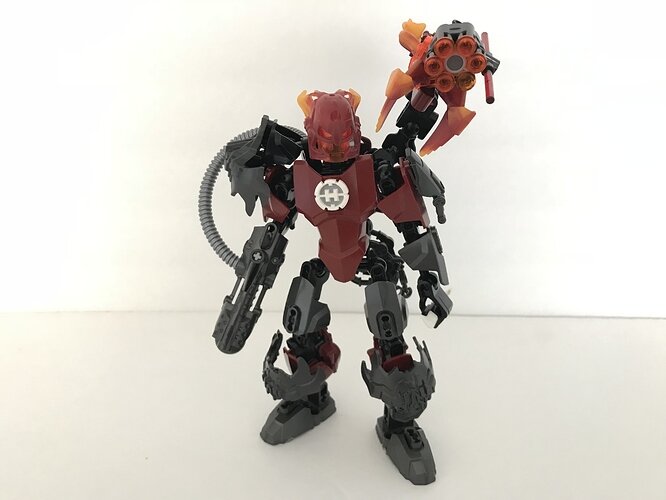 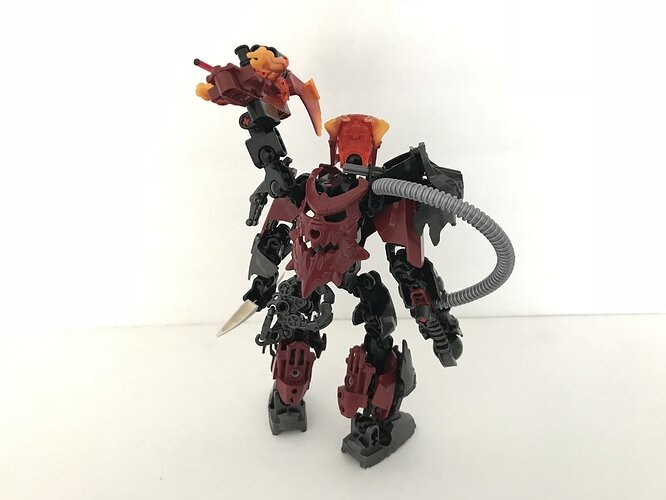 Dante Brimstone is one of the most powerful heroes in the hero factory. His weapons include: 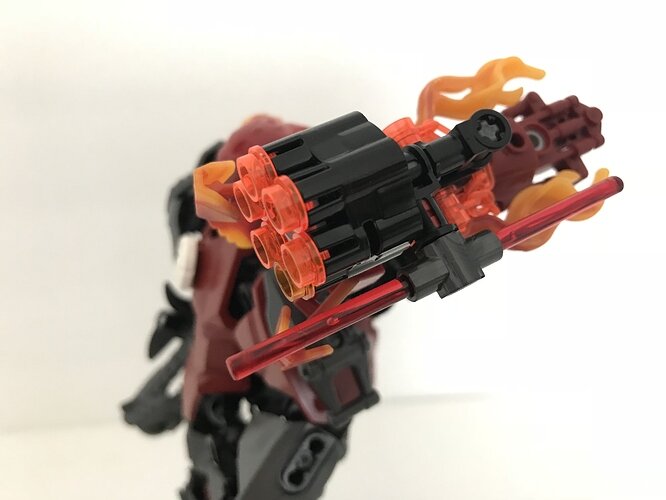 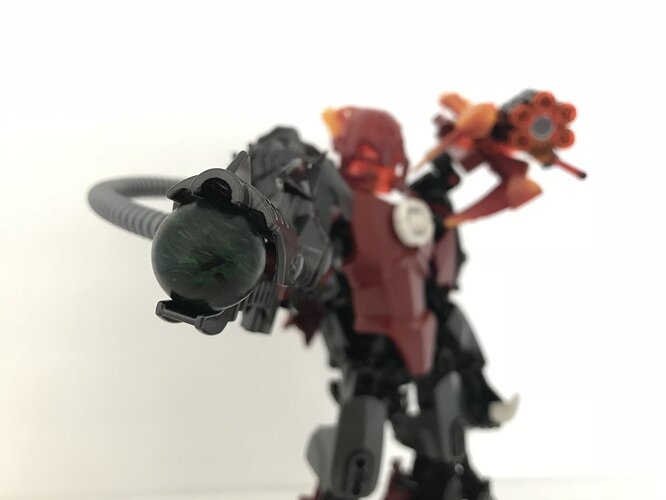 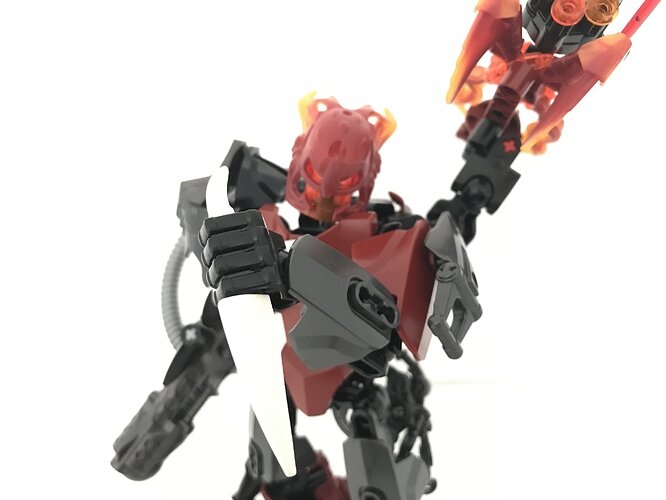 And his bone dagger he made from a dragon’s skeleton. 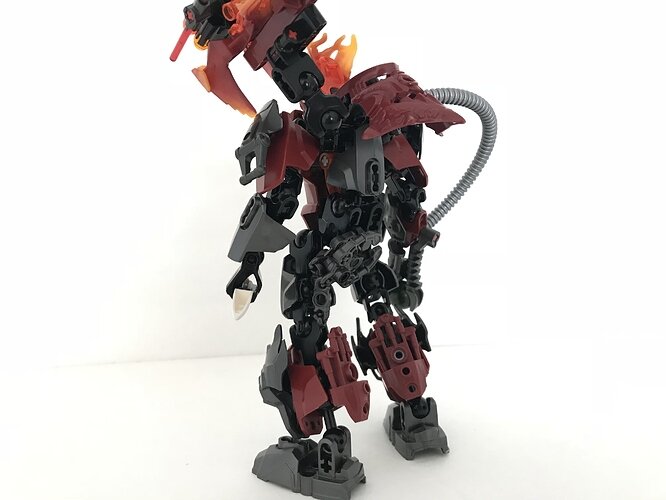 He has handcuffs due to HF regulations but he never uses them because he always kills his targets. 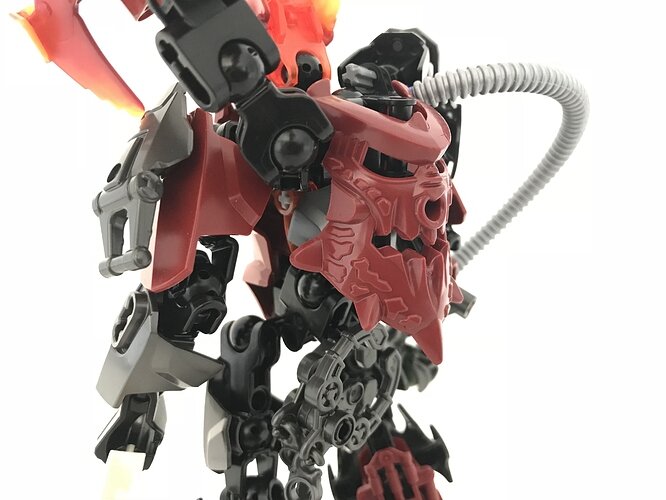 He also wears the face of a demon he killed on his back.

Dante was created by an HF splinter cell that was trying to overthrow the hero factory. Dante worked as a double agent, but when the splinter cell was found out, they tried to kill Dante. He survived, and continued in the HF. On one mission he was on, his entire team was captured and tortured. He was able to escape but the rest of his team died. He later went back and killed the villain.

This made Dante jaded, but he still did jobs for the hero factory to keep his cover. Due to him being made by the splinter cell, his hero core is unstable. That makes him more powerful but a little bit crazy. He also was a member of the recon team but that story is too dark for the boards.

I see you’re living up to your title’s namesake

also nice name selection, I very much so see what you did there

All in all, it’s a nice elaboration off the basic build. I’m not a fan of the gaps between the shin armor, but not much you can do there. I also think that you should cover up the back of his thighs, since they end up look more uncovered when you armor the calves.

cover up the back of his thighs

Any recommendations for that?

I think that you can just use the same technique you used with Dante’s calves, if you have the parts.

the edge is strong with this one

The piece can’t connect straight to the skeleton, and there isn’t enough pins to secure a technic bit. And, if I armor the back of the thigh like that he won’t be able to bend his knees very far.

Don’t see that many CCBS dudes with dark red these days. The colors are solid (would recommend adding in some more orange/yellow if possible, but dunno if you’d damage the layering scheme in the process). Not too big on Skull add-ons being used for anything other than shoulderplates, since they’re so round. Also, if you’re going to use white on a MOC, I’d recommend not using a white background.

Not too big on Skull add-ons being used for anything other than shoulderplates, since they’re so round.

Well, my goal was to assemble some pieces into the edgiest thing possible, so I decided to use those over smoother pieces like the breakout shin pad things.

Also, if you’re going to use white on a MOC, I’d recommend not using a white background.

Yeah, I posed him in that one shot so the knife was completely in front of his body. I don’t have any other backdrop options, so I had to make do.

Thanks for your feedback btw, sorry if it seems like I’m deflecting.