So, to add another character to my "Coming Eventually" RoT story, uh, here's this.

Main reason for making this was to have another female MOC, just to make another attempt, having tried before, and not too too happy with the results.

So, uh, yeah. Also, I wanted to experiment with those Bat Wing pieces from 2008. I've long thought them useless, but they work here quite well. 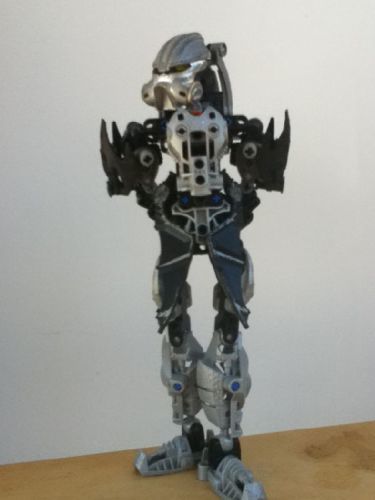 Yeah, the legs are basic, and I know, blue pins, whatever. Also, yes, I did kinda get lazy on the lower arms. I think the bones work there, though. Also, it was sheer accident that both Danu and Soli ended up with the Kiril. I just think it looks good on both of them, so whatever. 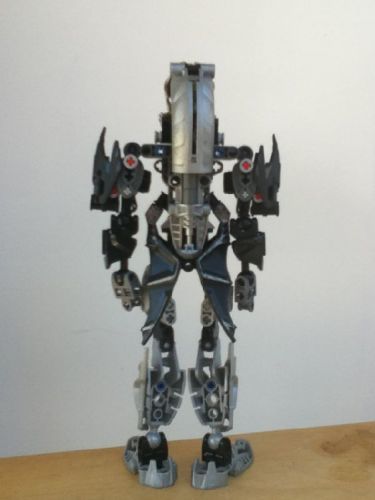 I find the Rahkshi back piece to be the cleanest looking of all the various "hair" styles I've tried. 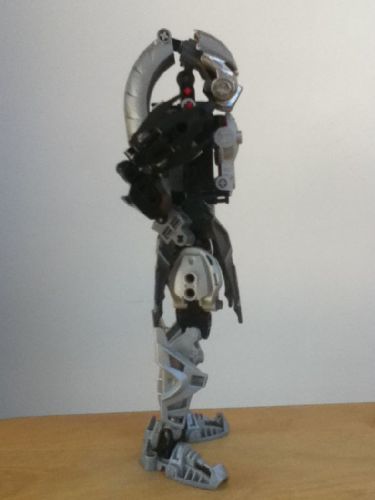 From a strict side view, the chestplate does look a bit gappy, but only from that exact angle, otherwise it looks fine. 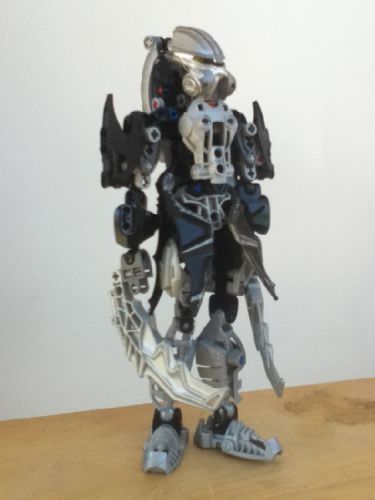 Like this angle, as she is posed with her two blade weapons. I have no clue what she was before a Shadow Toa, in-story, so the weapons are a bit random. But yeah, unlike Nyran, Danu follows traditional story conventions, having once had another Element. I think this angle and pose works out really well, better than the others I've shown, IMO 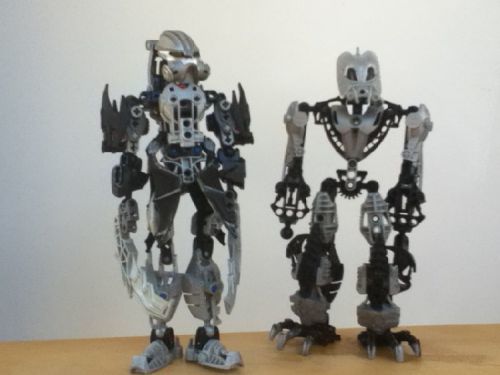 And compared to a generic Inika build. Like Soli, ironically, she's a bit on the short side compared to my normal Toa MOCs. ^^' She is taller than Soli, though. 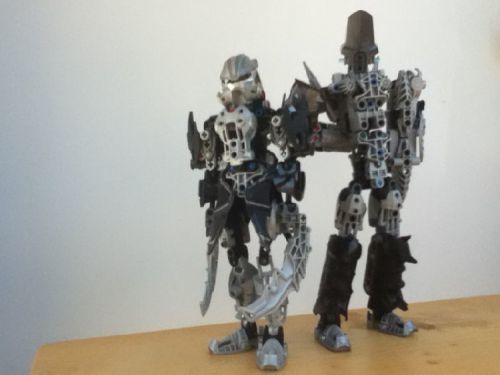 Here she is with my Knightpriest MOC. In-story, those two have lots to do with each other, so yeah. 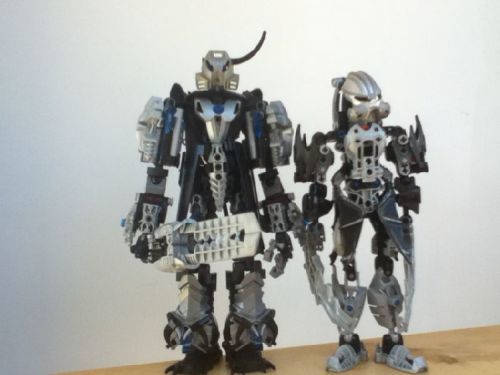 And just as reference compared to a normal Toa of one of my builds, here she is next to Nyran(A different Shadow Toa). Although, he is pretty tall, admittedly. So it's not the best comparison.

This MOC is not bad, I like the wing placement and simplicity of the MOC.

Sometimes it's nice to see a little simplicity in this sea of complicated MOCs.

Definitely one of my favorite MOCs of yours.

Still, glad you enjoy my content, and thanks for the feedback. ^^

she looks female without it being blatantly obvious. very good!

I'd have to say she's one of my favorites of your MOCs. Even if the build style is overused (coughblackandsilver cough). My only gripe is with the hair and maybe the uper arms, which aren't as streamlined.

Yes, outward armour pieces! Great moc. Personally I don't like the rahkshi piece but what do I know? ~Pyrox

You know Fenrek, right? Y'know how like, almost all of his MOCs have lots and lots of black?(Well, a good number of them)

Yeah, same reasons for my stuff, namely: Black, silver, and grey are abundant colors for me.

I also had lots of leftover pieces from this messy failure of a MOC, and I'm using the red for another project.

As for the upper arms, uh, I imagine they could be fixed with more consistent colors, but I dunno. Was just looking for a way to use the Skrall armor. :/

"Know"? I've managed to annoy him by pointing that out.

Yeah, they're pretty abundant colors for me too, but a color scheme consisting of those two colors is incredibly repetitive, and for a lot of us those types of builds mesh together. They have nothing to make them special. Good quality builds, of course, but nothing special.

And the backlash in itself is a thing. I made a black-and-silver MOC a while ago that I tried to differentiate by making it almost all black, using a lot of blue pins as actual coloration, and limiting the silver to very small accents. I still got called for it (although people did say I did better than most.)

Yeah, I think I saw that, actually. I tend not to comment on MOCPages, though, just 'cause it kinda takes way more effort than say, replying here, or even making a Youtube comment. It was cool, though

But yeah, sure is a good thing that you, and then like, three other people I don't even know are the only people who seem to see my stuff. 8D

I have done plenty of work in color, though, including at least 5 MOCs prior to this one that I've posted here.(Can't say they're all that great, but hey. I've tried.)

This is a pretty alright MOC, I like the idea of trying to use those Bat Wing pieces. The body is alright but I think it may need something on the side of the body like giving her those Hose pieces and putting Exo-Force arms on the chest armor, like for a good example my MOC Nieson.

The upper arms are really odd IMO but with the lower arm would be a lot better with a Tire piece. The mask and hair looks great on the MOC and fits well. The weapon even if it's random, it's easy and good arm swords.