So, I wanted to make my own member of the Frieza Clan from Dragonball Z, so I recolored the Berserker as a simple concept. I did trace this and only did this to get an idea of what Elurra could look like. I will work on a different drawing or group of drawings of Elurra that may include more personalized armor (because its Bio-Armor, and Elurra likes to be creative) and a version of him without his Bio-Armor.
Without further or do, here he is: 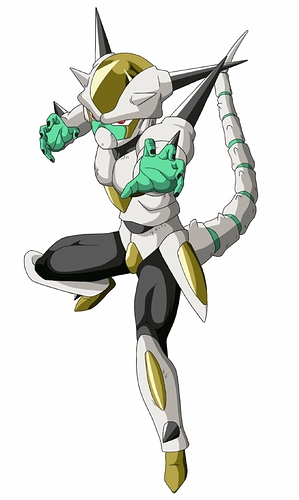 image.jpeg1639×2732 224 KB
Now, the reason I chose these colors was because first, I like tribal Mesoamerican Culture. Jade was a very big thing with Mayans, so I decided to incorporate that. Things similar to Jade, like Malachite and Turquoise were popular with Ancient Egyptians, so that served as part of the inspiration for Elurra’s skin color (other than the fact that it looks like spearmint, abiding by the code of cold for Frieza Race members).
Second, his jewels are meant to resemble Topaz, a gemstone also popular in Ancient Egypt, which is usually associated with the sun god Ra, and is said to prevent evil spirits and nightmares, which I feel would make an interesting trait.
I picked the Berserker reference because the skeletal tail looks awesome as well as the horn placement and face mask. The transformations look awesome as well.
The name Elurra is basically the Basque word for “snow” (also per the code of cold).
Elurra’s moves usually, but not all the time, involve a Norwegian word after secretly visiting Earth and learning about its culture (For example, his version of Frieza’s Vanishing Blaster is “Forsvinne-Ha!”, forsvinne meaning “vanish”). He becomes interested in cultures with a tribal society and based in the snow, and bases his own fighting style on Nordic Berserkers. He wants to experience the trance that these warriors go through, which destroys their allies as well as their enemies, however he is afraid he’d go out of control or worse, become a lot like Frieza, who he hates for giving the race a bad name. He decides to only attempt to “go berserk” as a last resort or if he’s away from any allies that might accompany him.
Let me know what you think so I can do better in my own drawing and sorry for all the words in this art topic.
13 Likes
decepticonaiden November 7, 2016, 11:46am #2

Thanks! Same, that and the wiki.

Fantastic job, it captures the art style of the show excellently.

I thought this was a screenshot from the show, nice goin’

wait this a retrace and recolor right?

Thank you all for your feedback. I have another drawing of Elurra without his bio-suit, assuming members of Frieza’s race don’t have to wear bio-suits. I had to do this one from scratch, so this would be Elurra’s first actual drawing. 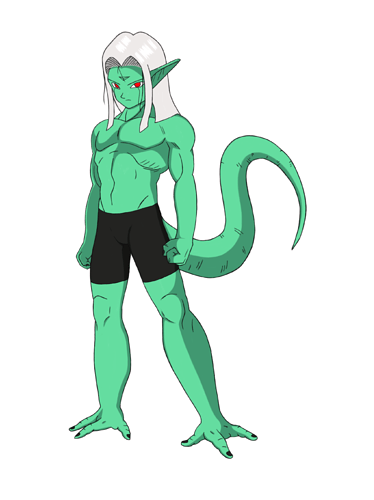 image.png2048×2732 1.24 MB
I based his design off the fact that members of Frieza’s race can have hair, but the occurence is uncommon. I also added a Dragon’s Eye on his forehead to further emphasize his interest in Earth culture. There weren’t any references of Frieza’s race without their armor, so I went with a more elven design, using Tapion, Android 17, Janemba, and, of course, Frieza and Cooler as references.
I figured Elurra could use this form as a way to disguise himself. Being one of Frieza’s race, it would make sense for him to not wear the bio-suit since it’s such an iconic look, and the hair would make him that much more unrecognizable. It would be like Zuko while he was a refuge in the Earth Kingdom. However, this form reduces his power level, almost acting like the transformations Frieza uses to lower the power cap. Elurra could be reverted to this form if he uses up all his energy, like how Super Saiyans return to normal if they use too much energy, or if he intends to hide his energy, which could be useful if he wants to avoid being sensed. He also usually uses this form whenever he isn’t fighting or on any kind of duty, since he feels a little awkward trying to relax or even go about a normal day in his armor, especially with his spikes.
1 Like
decepticonaiden November 9, 2016, 11:27am #9

Reminds me of Android 17

So, since the Time Patroller in Xenoverse 2 is a different one from the one in Xenoverse 1, and since I’m basing Elurra off the Xenoverse story, I’m thinking of doing a King Piccolo/Kami situation. Basically, Elurra is the name of a being who was experimented on by Frieza’s scientists. He was being used as a test to see if a member of Frieza’s race is capable of Fission, or one being split into two. One of the beings split from Elurra decided to carry the name, acting as a more agressive Elurra who only shows a kind side to those he trusts. The other being, who named himself Kide, was the silent part of Elurra. The two acted as opposite personalities, Elurra pushing others away with a hidden kind side and Kide being tolerant with a hidden aggresive side, however Elurra has been cutting off communication with Kide for a couple of reasons: the two disagreed in terms of approaching combat, and Elurra knew Kide embodied what the original Elurra tried to change. Kide represented a side of Elurra he didn’t like, which was a person who stayed quiet, but held harsh feelings and avoided direct conversation, almost being passive-aggresive. However, as Elurra began to open up more and started to let go of the tough image he tries to uphold, he wondered if Kide developed the same way. When Kide was recruited into the Time Patrol two years after the events of Xenoverse 1, Age 852, Elurra decided to catch up with Kide, hoping Kide is more open to conversation in general and hasn’t been holding any grudges.
Sorry for this long exposition, I’ll try to draw an image with both Elurra and Kide.