Hi! Recently I’ve had a few posts taken down for what I am told by the DM bot was “advertising.” I was given a link to the Guidelines page, and after thoroughly reading all four tabs on that page again (About, Privacy, etc.) there seems to be no definitive form of “advertising.” In the most recent post, I initially said I had three/four things going on to switch around when I happened to get MOC’er’s block. After editing that out to leave only the key point of that message (to quote my post: “I usually switch between projects”) It got flagged again for the same reason. What exactly is this site’s definition of advertisement? Am I just not supposed to make any references to things I’m working on, or am I allowed to make passing mentions that stay relevant to the current topic?

You probably weren’t flagged for advertisement - “Advertisement” is under the broader “spam” flag. It it most likely that in your case, it was specifically a flag for double posting.

Double posting is when you make multiple posts in a row in the same topic, instead of consolidating replies to a single post. It clutters the boards and gets removed or fixed by a mod. The issue is that flags auto-delete a post after 10 minutes, and sometimes the mod doesn’t arrive in time to fix the issue, and the post is lost.

The only real solution is to just not double post. To respond to multiple people, you can either ping them (@Waddlez) or quote them, by highlighting the text you want and hitting the ‘Quote’ button that’ll pop up, like this:

As for what counts as advertising, it’s usually self-promotion of things like a YouTube channel, LEGO Ideas Project, etc. Talking about WIPs and such is totally fine.

Actually come to think of it, you were in that exact topic. You’d understand the context there better than anyone else - you were there.

Wouldn’t there be a separate flag for general spam/double posting? 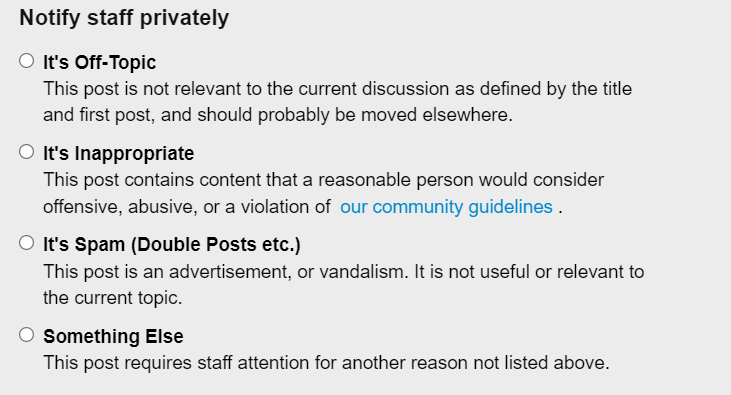 Interesting - those seem like very different things to be put under the same overgeneralized “flag.”

Actually, I haven’t really been keeping track of the topic, but I believe I might have sees you double post? Beyond that, I don’t know what you would have been flagged for.

The issue is that flags auto-delete a post after 10 minutes, and sometimes the mod doesn’t arrive in time to fix the issue, and the post is lost.

Flags do not auto-delete a post after 10 minutes or after any amount of time at all. Posts can be hidden from public view if they receive too many flags in a short amount of time, however, they are still visible to us mods. Posts are only deleted either after a 24-hour wait buffer if done so by the original poster (to allow for them to reverse their decision) or immediately if done by one of us mods.

I tried to delete the first (and shorter) post after I realized what I did, but I might not have done it right? Either way, thanks for taking the time to fix that up!