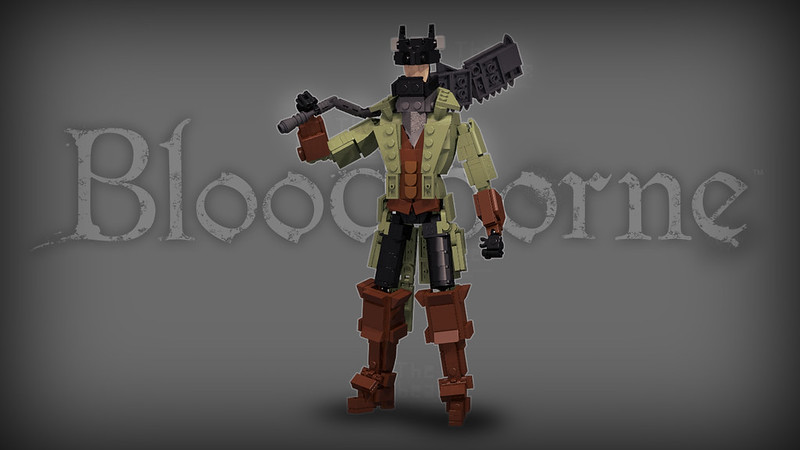 Pale blood will guide your way
Embrace the changes and be consumed
Bleak bells that chime dismay
Echo the cries of the paleblood moon!

The Hunter is a main protagonist/player character from an action RPG “Bloodborne” developed by FromSoft Gaming studio.

Bloodborne follows the player character, the Hunter, through the fictional decrepit Gothic, Victorian era inspired city of Yharnam, whose inhabitants have been afflicted with an abnormal blood-borne disease. Upon mysteriously awakening in Yharnam during the night of “The Hunt”, the Hunter seeks out something known only as “Paleblood” for reasons unknown. The Hunter begins to unravel Yharnam’s intriguing mysteries while hunting down its many terrifying beasts. Eventually, the Hunter’s objective is to locate and terminate the source of the plague, and escape the nightmare. (source)

I took inspiration from one of the basic Hunter outfits, using this image of an official Bloodborne statue as a reference. The weapon they wield is a so-called saw cleaver that, as all weapons in the game, can be transformed from a hacksaw-like weapon into a massive two-handed blade.

I love the shaping, it looks pretty realistic and accurate.

I love the shaping, it looks pretty realistic and accurate.

Thanks! Honestly I think that this particular figurine is my best to date, and it’s also one of the earliest I’ve built.

Pfff yeah because there’s also the coat that envelops them.
Actually, thighs are the insides of these particular body parts, hips are the outsides.

Back to do biology again. I suck.

It’s ok. Human anatomy is a fickle mistress. I only know all these things because my spouse is an artist and we kinda studied the anatomy course for artists together.