Another mirrorverse image I drew some time back. This one is of Ekimu in the Realm of Shadow. 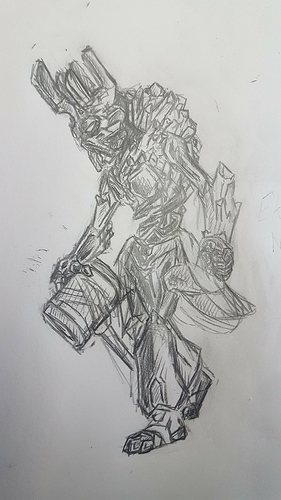 20170420_085728.jpg1836×3264 1.08 MB
[Rough draft excerpt]
Stumbling into his forge, Ekimu searched for his legendary mask that would put his name into history. He frantically paced across the entirety of the room, turning over each stone fixture.
“Where is it, where is it,” he cried. “It couldn’t have gotten far from here.”
Before he could panic further, the pain from his wounds caught up to him. A thousand foot drop onto a bed of flaming nails would have been too kind of a pain for him in this moment. He could barely keep focus on breathing. For the next few hours, all he could do was reflect.
“Creation was everything I knew. My hopes. My dreams. My entire life was built up on the possibility I could create and I failed. My greatest creation is gone; vanished within my grasp. I had the chance to realize the potential of all six elements, and it sent me here. Why didn’t it work? What went wrong?”
Ekimu collapsed on himself, muttering his all his ideas and insecurities into a garbled mess of speech and violent coughs.
33 Likes
Calebmar12 May 27, 2017, 9:51am #2

I really like the little story you wrote up, but man does that drawing looks fantastic