While we know of the direct creation of some Rahi, can the Rahi Makuta make evolve into new species? There’s an in universe debate about weather or not Ussal and Manas are related, there are also different subspecies of Rahi like Gukko, or some seemingly related Rahi like Tarakava and Crystal Climbers.
The diagram below is simply an example of how evolution might work, displaying multiple common ancestors, rather than one 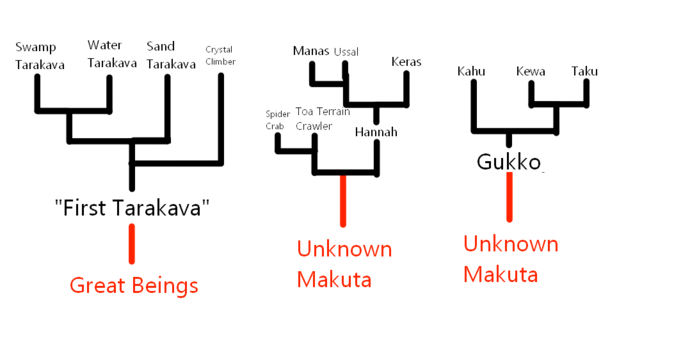 evorahiproto.png1078×541 19.2 KB
Of course, Rahi could also just belong to categories, rather than being physically related.
3 Likes
Theory: muaka, kane ra, Tarakava and the wolfrat from the legend of Mata Nui are related and maybe evolved form the same Rahi
Gilahu June 26, 2019, 9:41am #2

The thing that speaks against what we usually understand under evolution is that neither Rahi nor other MU beings can reproduce.

Thus I personally always saw Rahi that were described as “related species” as deriving partially from the same viruses or representing “updated” versions of an older Rahi version or something such.

However, plants in the MU seem to reproduce - as seen with the Morbuzahk seeds and seedlings. This probably would be an asexual, purely vegetative process, but still it might allow evolution, if during normal plant growth mistakes in copying the “genome”/programming of the plant could happen and thus be passed on to the next generation. Or might it even be possible for plants to be created in a way that lets them make these mistakes frequently and thus speed up evolution?

So if I may, I’d like to add a question:

Can plants in the MU evolve naturally?

Follow-up question to 2): Given that plants can reproduce (How do plants from the MU reproduce?), wouldn’t that require the seeds to have a blueprint (genes) for what they’d be creating/growing into, which would in turn would need to be created by the parent plant by creating a clone of it’s own blueprint? Wouldn’t that then mean that the clone’s blueprints can become flawed due to its fluent creation process, which is what is known as genetic mutation, also known as miniscule evolution? (This wouldn’t be possible for beings as they are unable to reproduce.)

There being some form of blueprint seems necessary. However, it might be that seeds have to be seen not as seperate units, but as actual parts of the plant with just a distinct form and purpose (purely vegetative reproduction). So there’s actually no additional “cloning” involved apart from what the plant naturally does to just grow.

Exactly this would also be the case in, say, a Matoran regrowing damaged organic tissue, though?

Hence if “genetic mutations” would happen in plants, they would also have to be possible in MU beings’ organic parts?